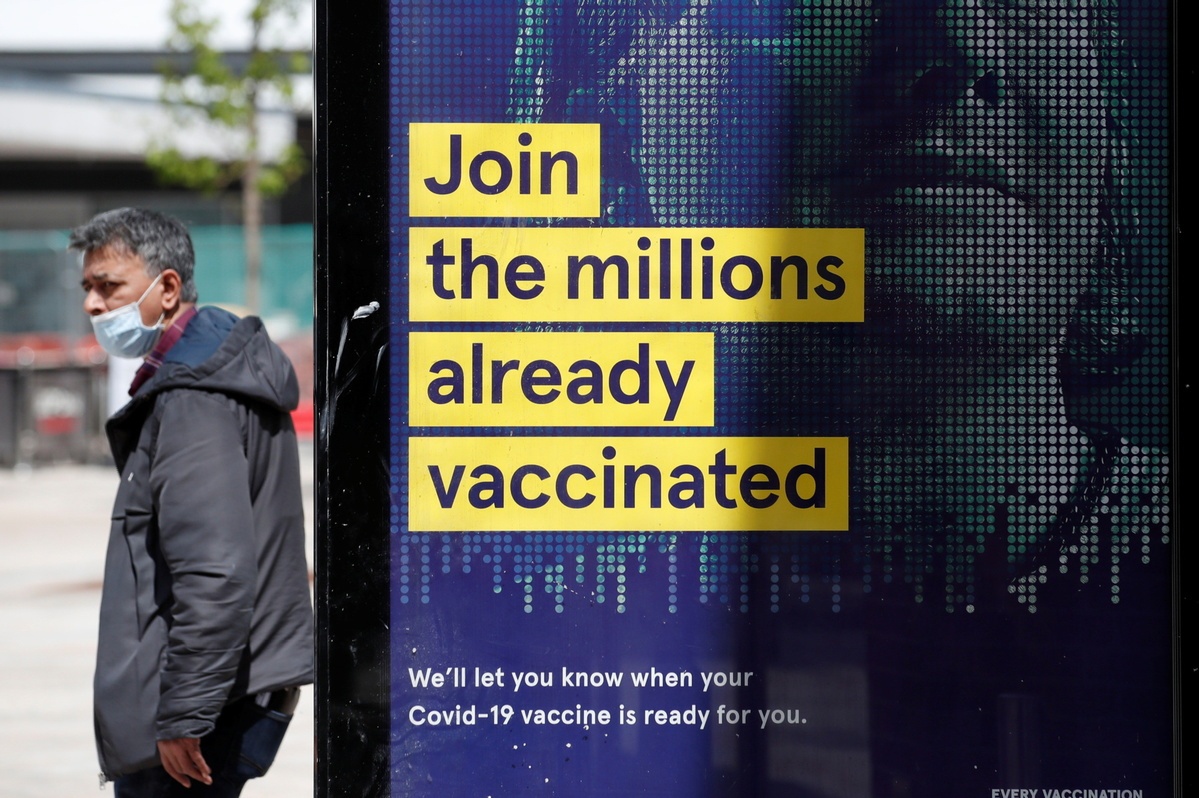 A man wearing a face mask walks past a vaccination advertisement, amid the spread of the coronavirus disease (COVID-19), in Bedford, Britain, May 27, 2021. (Photo: Agencies)

The British government is being advised to delay the June 21 lifting of pandemic restrictions, with scientists warning that the ability of the novel coronavirus to adapt to vaccines has left the country in a vulnerable position.

Ravi Gupta, a professor at Cambridge University and member of the New and Emerging Respiratory Virus Threats Advisory Group, known as NERVTAG, said the pandemic situation had changed since Prime Minister Boris Johnson unveiled his road map out of lockdown in February.

There is now doubt that the rules will be fully relaxed on the target date, with the emergence in the United Kingdom of the B.1.617.2 strain of the coronavirus, now identified by the World Health Organization as the Delta variant, which was previously known as the variant first identified in India.

On Monday, the UK registered more than 3,000 new COVID-19 infections for a sixth consecutive day. BBC News noted that the UK had not surpassed that number since April 12.

With only one death within 28 days of a positive test reported in the UK, there is evidence that the vaccinations are breaking the link between the disease and serious health problems, the Financial Times reported, but caution was crucial, said Gupta.

He told ITV's Good Morning Britain program on Tuesday that a rise in social mixing following last month's easing could lead to an increase in hospital admissions, and suggested that a short delay to relaxing measures could make an impact in the fight against the pandemic.

Gupta said: "We must remember this is a virus that does adapt, and faced with vaccines it will eventually start to make mutations to avoid them even further, and then we could be in an even more precarious situation after that."

The government will make a decision on any postponement to the June 21 target date by June 14, said Paul Scully, small business minister.

Speaking on Sky News on Tuesday, Scully said: "We're making sure that we can use the latest information rather than speculating now. We've only got to wait a couple of weeks."

Britons are now being vaccinated at a rate of four million per week, according to the government, and more than 39 million people have been given a first jab and a further 25.3 million have had both doses.

Gupta said the UK is in "a really good position" following its successful vaccination program, but noted that the new Delta variant had not yet emerged when the road map was first announced.

Speaking on BBC Radio 4's Today program, Gupta said the UK was already in a third wave of infections, with the Delta variant making up three-quarters of cases.

He said: "Of course the numbers of cases are relatively low at the moment－all waves start with low numbers of cases that grumble in the background and then become explosive, so the key here is that what we are seeing here is the signs of an early wave."

Government science advisor Adam Finn told the BBC's Today program on Tuesday that the battle with COVID-19 is not over as the UK needed to achieve a higher coverage of immunity across the population.

Finn, from the Joint Committee on Vaccination and Immunisation, said: "The idea that somehow the job is done is wrong－we've still got a lot of people out there who have neither had this virus infection nor yet been immunized and that's why we're in a vulnerable position right now."

The government has been urged by business leaders not to end provision of free workplace coronavirus tests, the Financial Times reported. Companies have been claiming free test kits since April but the program is due to finish at the end of this month.

Craig Beaumont, chief of external affairs at the Federation of Small Businesses, said: "It's an important weapon to stop the new variant circulating in business premises, and it underpins the June unlock date. It makes no sense to withdraw it just at the point we need more confidence in our businesses being COVID-secure."