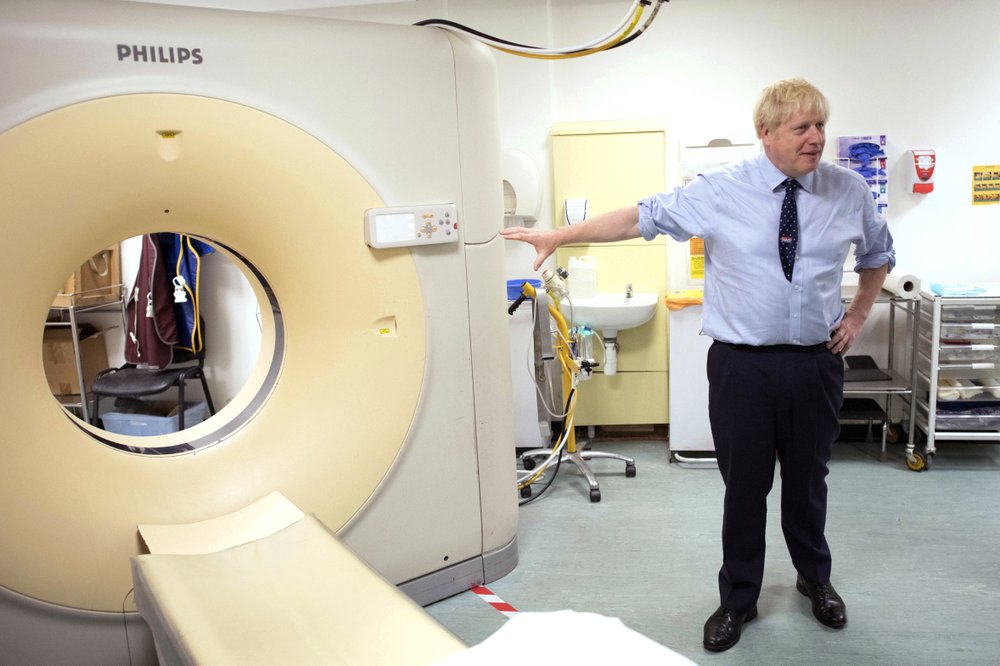 British Prime Minister Boris Johnson on Friday rebuffed allegations that he was inciting violence by accusing his Brexit opponents of “surrender” and “betrayal,” saying the only way to calm the simmering tensions was to stop delaying and leave the European Union.

Johnson, a Conservative, took power two months ago with a “do-or-die” promise that Britain will leave the EU on the scheduled date of Oct. 31, even if there is no divorce deal to cushion the economic consequences.

With talks between the UK and the EU showing little sign of progress, Johnson’s foes in Parliament are determined to avoid a no-deal exit. Economists say leaving without an agreement would disrupt trade with the EU, plunge the country into recession and — according to Britain’s government watchdog — potentially interrupt the supply of essential medicines for patients in Britain.

During raucous, ill-tempered parliamentary debates this week, Johnson said postponing the country’s departure would “betray” the people, referred to an opposition law ordering a Brexit delay as the “Surrender Act” and brushed off concerns that his forceful language might endanger legislators as “humbug.”

Opponents said Johnson’s language could incite violence. But he said the country’s social tensions were being caused by Britain’s failure to leave the EU more than three years after voting in a referendum to do so.

“Once you do that, then so much of the heat and the anxiety will come out of the debate,” Johnson said Friday as he visited a hospital — part of unofficial campaigning for an election that looks set to come soon. “Get it done and then we will all be able to move on.”

In Parliament, Johnson was repeatedly reminded that a Labour lawmaker, Jo Cox, was stabbed and shot to death a week before the 2016 Brexit referendum by a far-right attacker shouting “Death to traitors!” Many British lawmakers say they routinely receive death threats now.

On Friday, a 36-year-old man, Michael Roby, was charged with a public order offense after a disturbance outside the office of Labour lawmaker Jess Phillips, an outspoken critic of Johnson. She said her staff had to be locked inside when a man kicked the door and tried to smash the windows on Thursday.

Amber Rudd, who served in Johnson’s Conservative Cabinet until she quit three weeks ago, said she was “disappointed and stunned” by Johnson’s dismissal of their concerns. She told the Evening Standard newspaper that the incendiary language used by Johnson and his aides “does incite violence.”

Johnson said that all threats to politicians were “absolutely appalling,” but defended his use of the term “Surrender Act.”

“The use of that kind of metaphor has been going on for hundreds of years,” he said.

Johnson argues that he is safeguarding the will of the public against the interests of the political establishment, which wants to remain in the EU. In truth, the British public and its politicians are both bitterly divided over how, or even whether, to leave the 28-nation bloc.

Church of England bishops appealed for calm amid the growing acrimony.

“We should speak to others with respect,” the bishops said in a statement. “And we should also listen ... We should not denigrate, patronize or ignore the honest views of fellow citizens, but seek to respect their opinions, their participation in society, and their votes.”

Meanwhile, the National Audit Office said in a report Friday there was still a “significant amount” of work to do to make sure Britain has enough medical drugs if it leaves the EU on Oct. 31 without a divorce deal.

It said additional shipping capacity chartered by the government might not be operational until the end of November, a month after the Brexit deadline. Of the more than 12,300 medicines licensed in the UK, about 7,000 arrive from or via the EU, mostly across the English Channel.

Alan Boyd of the Academy of Medical Royal Colleges said people with epilepsy were a particular concern in the event of any drug shortages, noting that “one seizure can have a life-changing impact.”

Johnson insists he wants to strike a deal, but is demanding significant changes to the withdrawal agreement negotiated by his predecessor, Theresa May. That deal was rejected three times by Britain’s Parliament.

The EU, however, says it is still waiting for concrete proposals from Britain on maintaining an open border between the UK’s Northern Ireland and EU member Ireland — the key sticking point.

Barnier said after the meeting that “it is essential that there is a fully operational solution in the Withdrawal Agreement to avoid a hard border on the island of Ireland.”

Barclay said a Brexit agreement was possible, but “I think we are coming to a moment of truth in these negotiations.”

“We will see if there is political will on both sides,” he said.

Britain says it doesn’t want to submit detailed proposals too early, in case they leak, but plans to do so before an EU summit on Oct. 17-18.

EU Commission chief Jean-Claude Juncker said a no-deal Brexit would be a “catastrophe” for both the UK and Europe — but if it happened, “the responsibility for this lies on the British side alone.”

Johnson’s political opponents have passed a law compelling the government to ask the EU for a delay to the UK’s exit if no deal has been struck by late October. Johnson is adamant he won’t do that — but also says he will comply with the law.

A former Conservative prime minister, John Major, said he feared the government would use constitutional trickery to get around the law by suspending it until after the Oct. 31 Brexit deadline.

International Development Secretary Alok Sharma refused to say whether the Cabinet had discussed such a tactic.

“We are absolutely going to comply with the law, we are working incredibly hard to get a deal and we will be leaving on Oct. 31,” he said.