LONDON (AP) — Britain's Brexit secretary made a rush visit to Brussels on Sunday for surprise talks with the top European Union negotiator as Brexit talks accelerated ahead of a summit later this week. 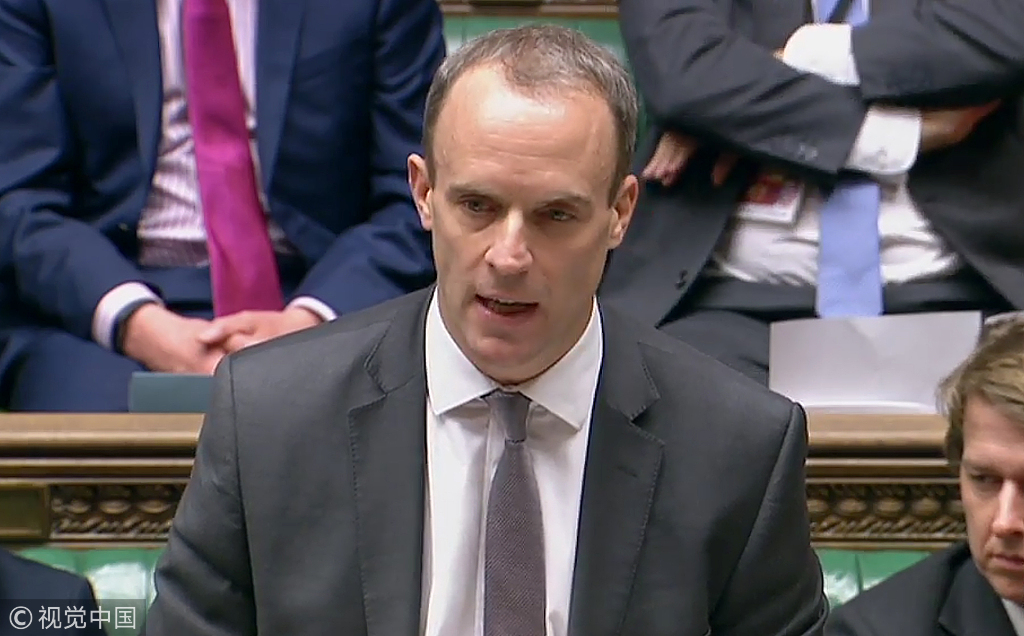 Britain's Secretary of State for Exiting the European Union (Brexit Minister) Dominic Raab addressing MPs in the House of Commons in London on October 2018. (Photo: VCG)

Dominic Raab's office said in a statement that the unusual weekend meeting with the EU's Michel Barnier was necessary.

"With several big issues still to resolve, including the Northern Ireland backstop, it was jointly agreed that face-to-face talks were necessary," Raab's office said.

The two are seeking a compromise position on the difficult Irish border question ahead of an EU summit that begins on Wednesday.

Even if a deal is reached on Britain's divorce from the bloc, it's clear that British Prime Minister Theresa May will find it challenged at home.

Raab's predecessor, David Davis, wrote in the Sunday Times that May's plans for some continued ties with the EU even after Britain leaves the bloc is "completely unacceptable" and must be stopped by her ministers.

May is struggling to build a consensus behind her Brexit plans ahead of a cabinet meeting Tuesday that will be followed by the EU summit on Wednesday. If Davis' call for a rebellion is effective, the cabinet meeting is likely to be fractious.

Davis and former Foreign Secretary Boris Johnson resigned from May's cabinet this summer to protest her Brexit blueprint. While all three are in the ruling Conservative Party, the two men have become vocal opponents of May's plan, saying it would betray the Brexit vote and leave Britain in a weakened position.

May also faces obstacles from the Democratic Unionist Party in Northern Ireland, which has played a crucial role in propping up her minority government in Parliament.

DUP leader Arlene Foster remains opposed to any Brexit plan that would require checks on goods traveling between Northern Ireland and Britain, as some EU leaders have suggested as part of a backstop.

May's Brexit plan has also been questioned by some opposition Labour Party lawmakers, further dimming the prime minister's hopes of winning parliamentary backing for any Brexit deal she reaches with EU officials.