UK’s Brexit plans to be tested 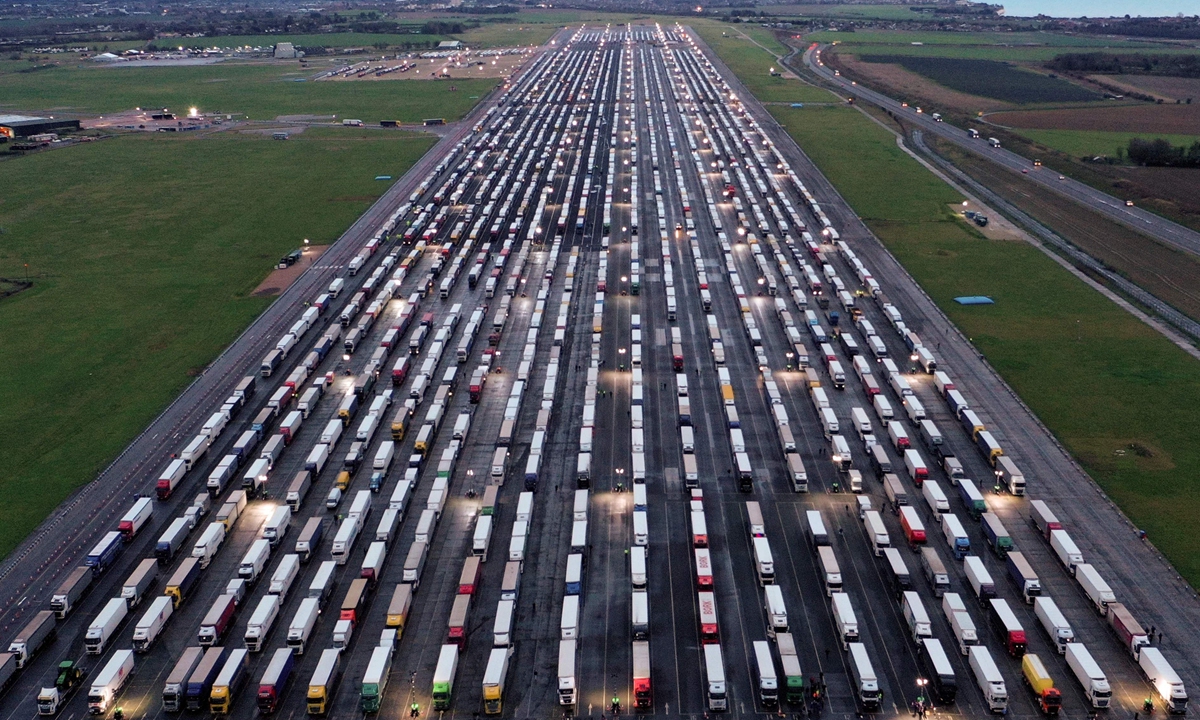 Trucks waiting to cross the English Channel are parked on the runway of Mansdon Airport in Ramsgate, UK, on Tuesday. Due to concerns over the novel coronavirus strain, France suspended freight and passenger travel from the UK. Nearly 1,000 trucks are stranded in Kent as drivers wait for traffic to resume from Dover to France. (Photo: VCG)

Britain faced the first true test of its Brexit preparations on ­Monday, with thousands of ­lorries expected to make the Channel crossing for the first time since the country left the European Union's single market and customs union.

However, the government expects thousands of lorries to make the crossing on Monday, bringing goods to and from the continent and testing its plans to keep traffic flowing around key ports such as Dover.

The government, which has employed 1,000 new border officials, is phasing in the new customs checks, with full import control checks for all goods not to be implemented until July.

But it is concerned that truckers will turn up at Dover without the proper paperwork, causing delays at the port itself and blocking surrounding roads if they are turned away.

While it believes most large businesses are ready for the new rules, the government is worried that around 50 percent of medium and small firms have not carried out the measures now needed to export goods to Europe.

In its reasonable worst-case scenario, over half of trucks turning up to Dover may not be ready for travel, leading to queues of 7,000 lorries that will be directed towards a disused local airfield.

That could lead to a return to the chaotic scenes witnessed before Christmas, when thousands of trucks were marooned in Britain after France closed the border to all traffic due to surging coronavirus cases.

The lorries ended up being stuck for days at the Manston airfield while the drivers were all tested for the virus.

The Department for Transport announced on Saturday the creation of 10 new testing sites, with 10 more opening on Sunday.

In a bid to prevent lorries arriving at Dover unprepared, truckers heading across the Channel are required to obtain temporary permits to allow them to drive on the roads of Kent, the county in which the port is situated.

Cameras will identify any trucks without the Kent Access Permit, with the drivers facing a 300 pound ($410) penalty, although it appeared not all truckers understood the new rules.