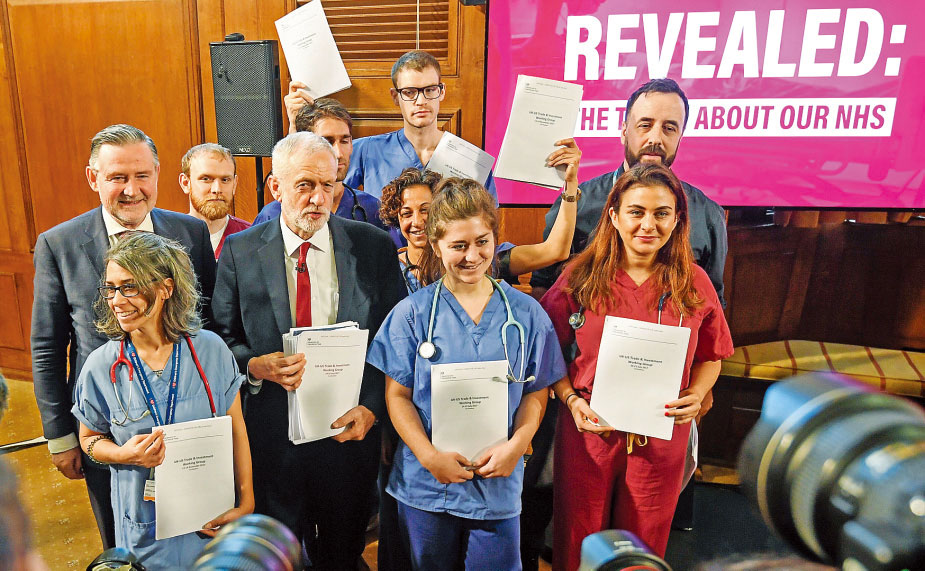 The United Kingdom's Conservative Party is planning to ruin the nation's beloved National Health Service if it wins a majority at the Dec 12 general election, according to the leader of the incumbent government's main political opponents, the Labour Party.

Labour leader Jeremy Corbyn claims to have proof of the plan in the form of 451 pages of official documents that, he says, detail the Conservatives' intention to sacrifice the NHS in order to win a post-Brexit trade deal with the United States.

Conservative leader Boris Johnson said Corbyn's claims are nonsense but the Labour Party leader insists the papers prove the US wants "total market access" in the event that the UK leaves the European Union.

"The uncensored documents leave Boris Johnson's denials in absolute tatters," Corbyn told reporters in London. "We have now got evidence that, under Boris Johnson, the NHS is on the table and will be up for sale. He tried to cover it up in a secret agenda and today it has been exposed."

Corbyn claims the documents refer to six rounds of talks between the UK and the US held between July 2017 and this year in both Washington and London.

"We are talking here about secret talks for a deal with Donald Trump after Brexit," he said.

Corbyn claimed the talks called for medicines to be protected for longer by patents, something that would result in fewer generic medicines and more expense for the NHS.

"Lives will be put at risk as a result of this," he insisted while claiming large US pharmaceutical companies would be the big winners.

The Guardian newspaper reported that the Conservative Party was saying the documents had been freely available online for two months and were not contentious. The Conservatives said Corbyn was trying to divert attention away from his own poor performance in pre-election opinion polls and from criticism of his party over its record in tackling antisemitism.

Liz Truss, the UK's international trade secretary, told the Guardian: "Jeremy Corbyn is getting desperate and is out-and-out lying to the public about what these documents contain … As we have consistently made clear, the NHS will not be on the table in any future trade deal and the price that the NHS pays for drugs will not be on the table."

Corbyn, though, insisted the threat to the NHS was real and said another aspect of the proposed trade deal opens the door to letting US corporations sue the UK.

Channel 4 News noted that the talks were preliminary and took place before Johnson became prime minister. It said the documents contain nothing "that proves there is a secret plot by the government to privatize the NHS, sell parts of it off or dramatically increase the health services' drug bill".

And the Financial Times noted that the documents detail what the US would like to get out of any future trade deal but do not show what the British government is prepared to concede.