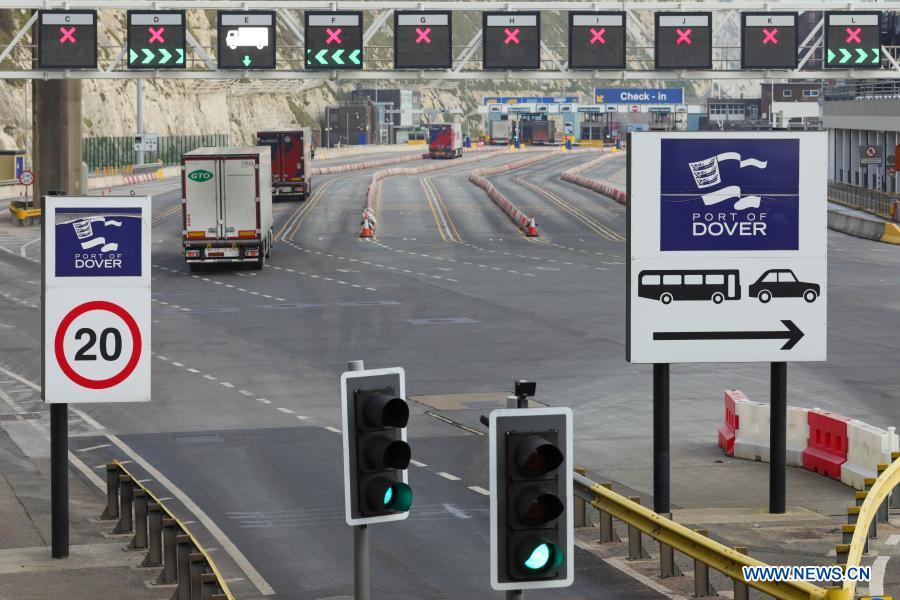 Freight lorries arrive at the Port of Dover in Dover, Britain, Jan. 1, 2021. Roads around Britain's port of Dover remained quiet Friday and largely avoided the previously anticipated confusion and congestion, even though Britain has kicked off a new era outside the European Union (EU). (Photo by Tim Ireland/Xinhua)

LONDON, Jan. 1 (Xinhua) -- Roads around Britain's port of Dover remained quiet Friday and largely avoided the previously anticipated confusion and congestion, even though Britain has kicked off a new era outside the European Union (EU).

Without signs of delays on surrounding roads, the first drivers that entered Dover from France found themselves at the center of attention as Brexit transition period ended at 2300 GMT on New Year's Eve.

Lower trade volumes on the New Year's Day holiday could mean the full impact of the new regime is yet to be felt, but freight appeared to be moving freely at the borders with Ireland and France under the new arrangements.

Britain's ambassador to France Lord Llewellyn tweeted Friday that things were "running smoothly" as he visited the port at Calais and the Eurotunnel terminal "to see the situation on the ground".

Meanwhile, an official from Dublin Port said there were no delays as the first trucks arrived into Irish ports, the Evening Standard newspaper reported.

However, there are warnings that the situation may change in the coming days as traffic will start to build up after the new year holidays.

Some businesses have intentionally delayed their transportation due to concerns over congestion at the beginning of the year.

Rob Hollyman, director of Youngs Transport and Logistics which is a Britain-based company, told the BBC that he would not run any of its lorries in the first week of January.

"I can't afford to have my vehicles delayed," he said.

"We didn't think that the risk of joining a queue that was two miles long in either direction was a risk worth taking. I'll see how it pans out the first week and maybe get our vehicles across the following week," he said.

Rod McKenzie, managing director of Policy & Public Affairs at The Road Haulage Association London, told Kent online that there could be two types of chaos which may emerge in the coming weeks.

"We could have the kind of visible chaos we had before Christmas with queues of lorries for miles, or we could have invisible chaos with lorries simply not leaving their distribution centers because their paperwork has not been processed online," McKenzie was quoted as saying.

"But it will be a few days yet before we are able to guess what's really happening. No-one really works on New Year's Day, which is why we don't expect miles of queues straight away. Things will pick up from Monday onwards and my best guess is we may start experiencing some sort of disruption then -- which could go on for three months while we smooth out the wrinkles," McKenzie told Kent online.

Kent County Council also warned: "The rules for doing business with Europe have changed. It may take longer to process traffic leaving the UK, causing delays in passing through the border controls."

Meanwhile, police are manning a moveable barrier at the entrance to the Eastern Docks in Dover, checking to see if vehicle drivers and passengers have paperwork to prove they have been tested for coronavirus.

HGV drivers planning to enter France need to take a COVID-19 test at the nearly Manston before continuing to Dover.

Thousands of lorries had been trapped near Dover last month as France shut its border due to concerns over the spread of a new coronavirus variant.

Britain ended its EU membership on Jan. 31, 2020, four and half years after the country voted to leave the regional bloc.

The EU and Britain announced on Dec. 24, 2020 that they had reached an agreement that will govern their trade and security relationship starting from Jan. 1, 2021, after the end of the Brexit transition period.

The deal, which came after nine months of arduous negotiations between Britain and the EU, is the biggest bilateral trade deal signed by either side, covering trade worth around 668 billion pounds (913 billion U.S. dollars).