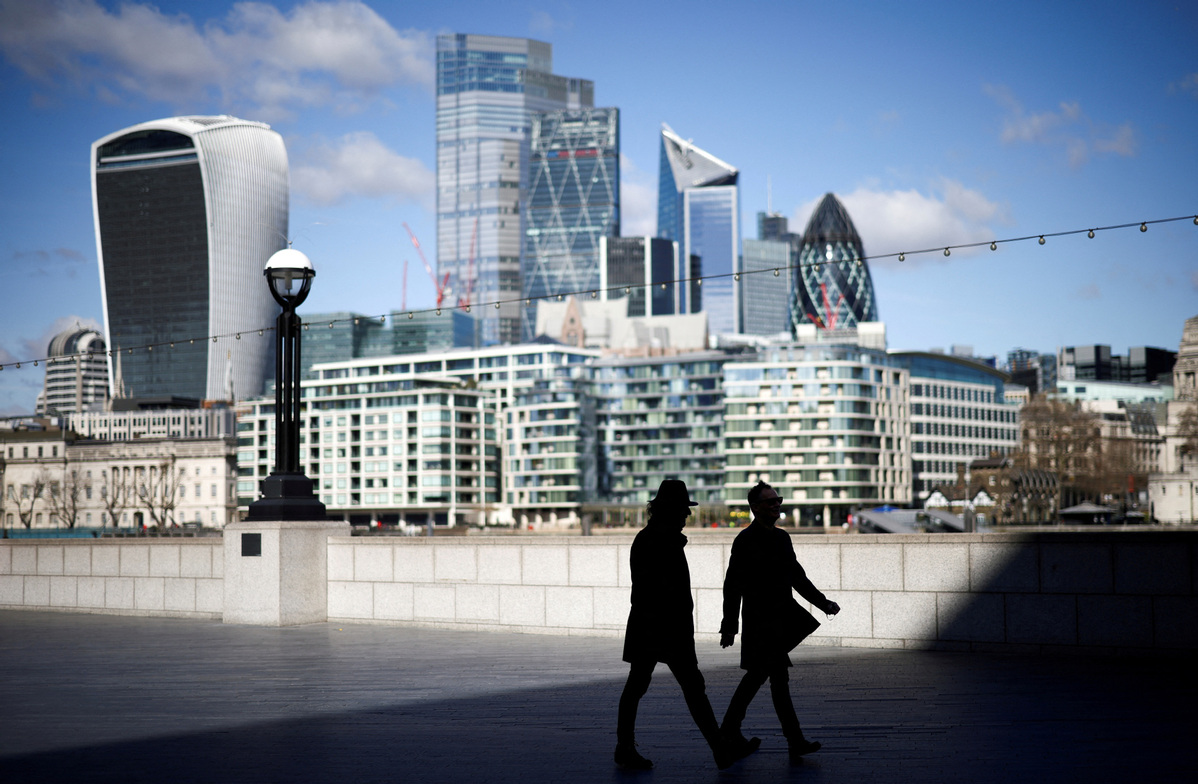 The City of London financial district can be seen as people walk along the south side of the River Thames, amid the coronavirus disease (COVID-19) outbreak in London, Britain, in this March 19, 2021 file photo. (Photo: Agencies)

The United Kingdom's plan to use pension funds to spark economic growth has been derailed by the ongoing devaluation of government bonds, which the government inadvertently triggered when it unveiled its disastrous mini-budget last month, experts have told the Financial Times.

The government had hoped an increased use of retirement funds' capital would boost the UK's stagnating economy, but the newspaper said the liquidity crisis in government bonds has ruined the idea.

Kerrin Rosenberg, chief executive of Cardano, an advisory company that manages investments, told the paper: "Pension funds have higher proportional exposure to illiquid assets, which affects their willingness and ability to make new commitments. The capacity of the pension fund industry to be a buyer of illiquid assets has taken a blow."

The government had tried to encourage pension funds to ramp up their investments through "long-term asset funds", or LTAFs, which the financial sector's regulator approved last year.

LTAFs encourage pension funds, which usually have long-term investment goals, to invest in businesses and infrastructure that are known as illiquid assets — such as real estate, private debt, and venture capital.

But the UK government's minibudget unveiled on Sept 23 featured massive tax cuts and spending commitments that ran contrary to the central bank's efforts to cool the economy and lower inflation. And it also called for new expenditure to be funded through borrowing, instead of taxes. The pound lost value against the dollar as a result, slumping to an all-time low. In addition, UK government bonds devalued, which sparked the UK's pension sector into a selloff of assets in order to raise cash in the face of their liquidity crunch.

The FT said the situation means pension funds will almost certainly avoid making the sort of investments the government had been hoping for.

The UK's ongoing financial crisis, which includes inflation running at almost 10 percent and soaring fuel bills, has led to increased criticism of Prime Minister Liz Truss, who only came to power around a month ago after internal pressure forced former prime minister Boris Johnson to step down.

The disquiet within Truss's governing Conservative Party prompted Foreign Secretary James Cleverly to defend her on Thursday morning, saying that a change in national leader would harm the UK "politically and also economically".

He spoke after Truss met rank-and-file lawmakers from her ruling Conservative Party on Wednesday evening for a gathering that the BBC described as stormy.