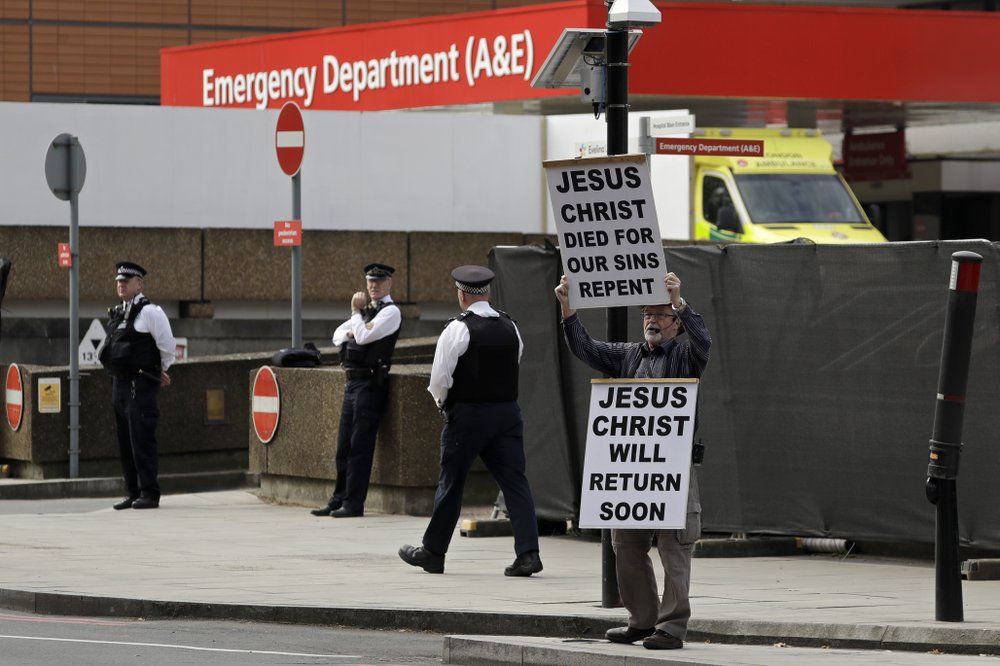 British Prime Minister Boris Johnson remains in intensive care with the coronavirus but is improving and sitting up in bed, a senior government minister said Wednesday, as the U.K. recorded its biggest spike in COVID-19 deaths to date.

Johnson, the first world leader diagnosed with the disease, has spent two nights in the ICU at St. Thomas’ Hospital in London.

“The latest from the hospital is the prime minister remains in intensive care where his condition is improving,” Sunak said at a news conference. “I can also tell you that he has been sitting up in bed and engaging positively with the clinical team.”

That glimmer of good news came as the number of COVID-19-related deaths in Britain approached the peaks seen in Italy and Spain, the two countries with the greatest number of fatalities.

The figures may not be directly comparable, however. Not all the U.K. deaths reported each day occurred in the preceding 24 hours, and the total only includes deaths in hospitals.

The government’s deputy chief scientific adviser, Angela McLean, said that despite the grim death figures, the number of new cases “is not accelerating out of control ... and that is good news.”

Johnson, 55, is the most high-profile of more than 60,000 people in Britain who have been confirmed to have the virus.

He was diagnosed on March 26 and still had a cough and fever 10 days later. He was admitted to St. Thomas’ Hospital Sunday and moved to the ICU on Monday after his condition deteriorated. Foreign Secretary Dominic Raab is standing in for Johnson while he is hospitalized.

Johnson spokesman James Slack said earlier Wednesday that the prime minister was receiving “standard oxygen treatment” and breathing without any other assistance.

Johnson’s illness has unleashed a wave of sympathy for the prime minister, including from his political opponents. It has also heightened public unease about the government’s response to the outbreak, which faced criticism even with the energetic Johnson at the helm.

Britain was slower than many other European nations to close schools, shut businesses and restrict people’s movements in a bid to curb infections, and the government has struggled to meet its goal of dramatically increasing the number of individuals tested for the virus.

Britain initially restricted testing to patients in hospitals with coronavirus symptoms, but has begun testing health care workers and their families. The government has said even broader testing will be part of the country’s exit strategy from the lockdown, and has promised to test 100,000 people a day by the end of April. The current number is about 14,000 a day.

For most people, the coronavirus causes mild to moderate symptoms such as fever and cough. But for some, especially older adults and the infirm, it can cause pneumonia and death.

After a slow start, the government has urged the private sector to get involved. Drug makers GSK and AstraZeneca say they are setting up a lab at Cambridge University capable of performing 30,000 tests a day by the start of May.

“We took our decisions based on the best available medical and scientific advice,” he said. “We believe we acted with the right measures at the right rime.”

In Johnson’s absence, it’s unclear who would decide whether to ease nationwide lockdown measures the British government imposed on March 23 in response the worldwide pandemic.

The initial three-week period set for the restrictions expires next week, but with cases and deaths still growing, officials say it is too soon to change course.

Mark Drakeford, the first minister of Wales, said it was clear “these restrictions will not end” next week.

“We will not throw away the gains we have made and the lives we have saved by abandoning our efforts just as they begin to bear fruit,” he said.

Meanwhile, officials are watching anxiously to see whether Britain’s hospitals can cope when the number of seriously ill COVID-19 patients reaches its peak. Before the outbreak, the U.K. had about 5,000 intensive care beds, and the government has been scrambling to increase that capacity.

The Nightingale Hospital -- a temporary facility for coronavirus patients built in nine days at London’s vast ExCel conference center -- admitted its first patients on Wednesday. It can accommodate 4,000 beds, if needed. Several other temporary hospitals are being built around the country, including a facility in Birmingham due to open Friday.

London Mayor Sadiq Khan said the city, which is the epicenter of Britain’s outbreak, had one-quarter of its existing hospital beds still available, as well as the new Nightingale hospital.

Khan was under pressure to do more to keep transit workers safe after 14 London transport staff died from the new coronavirus, including eight bus drivers.

London’s subways and buses have continued to run a reduced service to transport key workers. Khan said buses were being cleaned with antiviral disinfectant and protective screens were being installed between driver and passengers.

Anne Nyack, whose 36-year-old son Emeka Nyack Ihenacho is among the drivers who died, said drivers were still not being protected.

“They are at risk, my son was at risk, sadly he died,” she told ITV. “He was given hand sanitizer — he had no mask, no gloves, nothing.”