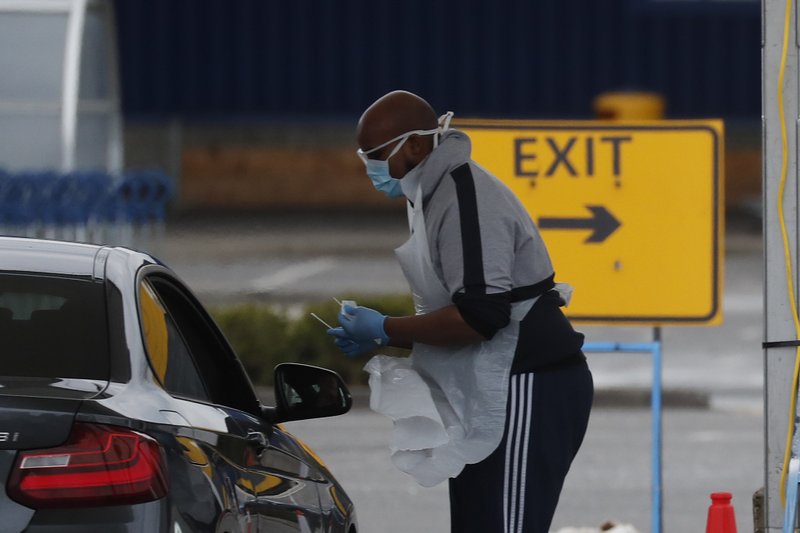 National Health Service staff wait in their cars to take a coronavirus test at a drive through centre in north London, Wednesday, April 1, 2020. (Photo: AP)

When Prime Minister Boris Johnson developed a cough and fever, he got a test for the new coronavirus. Most other Britons won’t be offered one.

Johnson’s Conservative government was under fire Wednesday for failing to keep its promise to increase the amount of testing being done for COVID-19, even as the country saw its biggest day-to-day rise yet in deaths among people with the virus, to 2,352.

The issue has become an incipient political crisis for Johnson, who has mild symptoms and is working from isolation in the prime minister’s Downing Street apartment.

Richard Horton, editor of medical journal The Lancet, said Britain’s handling of the COVID-19 crisis was “the most serious science policy failure in a generation.”

In a tweet, he noted that England’s deputy chief medical officer said last week that “’there comes a point in a pandemic where that (testing) is not an appropriate intervention.”

Like some other countries, the U.K. has restricted testing to hospitalized patients, leaving people with milder symptoms unsure whether they have had the virus. Many scientists say wider testing -- especially of health care staff -- would allow medics who are off work with symptoms to return if they are negative, and would give a better picture of how the virus spreads.

Communities Secretary Robert Jenrick conceded Wednesday that “we do need to go further and we need to do that faster.”

The U.K. initially performed about 5,000 tests a day, but the government promised to increase that number to 10,000 by the end of last week and to 25,000 by mid-April. The target has been elusive. On Wednesday, the government said 9,793 tests had been performed in the previous 24 hours, the highest daily total yet.

Critics contrast the U.K. with Germany, which reacted quickly as reports of the new respiratory virus emerged from China at the end of last year. It began producing a test for COVID-19 in January, weeks before the U.K. Germany now has the capacity to do 500,000 tests a week.

The government says testing front-line health care workers is a priority — however only 2,000 have been tested so far, from a National Health Service workforce of more than 1 million.

“The intention here is to get from thousands to hundreds of thousands in the coming weeks,” she said at a news conference.

British officials blame shortages of swabs to take samples and of chemicals known as reagents, which are needed to perform the tests, for the delay in ramping up testing.

“There is a massive demand for raw materials and commercial kits -- this is not unique to the U.K. -- and many places no longer have stock of essential reagents,” said Stephen Baker, professor of molecular microbiology at the University of Cambridge.

The United States has also struggled to boost its testing capacity. A test produced by the Centers for Disease Control suffered early reliability problems and there were delays in engaging the private sector to ramp up testing capacity. U.S. testing is now growing rapidly, but varies widely from state to state.

Public health experts have estimated the U.S. should be testing between 100,000 and 150,000 patients daily to track and contain the virus. Health and Human Services Secretary Alex Azar said Monday that the U.S. is testing “nearly 100,000 samples per day” and had now tested more than 1 million samples for the coronavirus. It wasn’t clear if that figure represented actual patients or samples processed.

British officials defend their record at developing and deploying a test for COVID-19. They also say that while too little testing is a weakness, so is too much, because testing vast numbers of healthy people would be wasteful.

That point was echoed by World Health Organization emergencies chief Dr. Mike Ryan, who said a ratio of 10 negative tests to one positive was “a general benchmark of a system that’s doing enough testing to pick up all cases.”

In Britain, about 20% of tests have been positive, suggesting a substantial number of cases is being missed.

Critics of the British government say the testing debacle is typical of its sluggish and complacent response to the pandemic.

The U.K. was slower than many European countries to implement measures such as closing schools, bars and restaurants and telling people to stay home to impede transmission of the virus. A nationwide lock-down was imposed just over a week ago.

After a decade of public spending cuts by Conservative governments, the National Health Service and other public health bodies have very little spare capacity.

Jonathan Ashworth, health spokesman for the main opposition Labour Party, said health workers “are rightly asking if we’ve left it too late to buy the kits and chemicals we need, or whether our lab capacity is too overstretched after years of tight budgets.”

“NHS staff and carers on the front line who need these tests urgently deserve an immediate explanation from the government as to what’s going on,” he said.