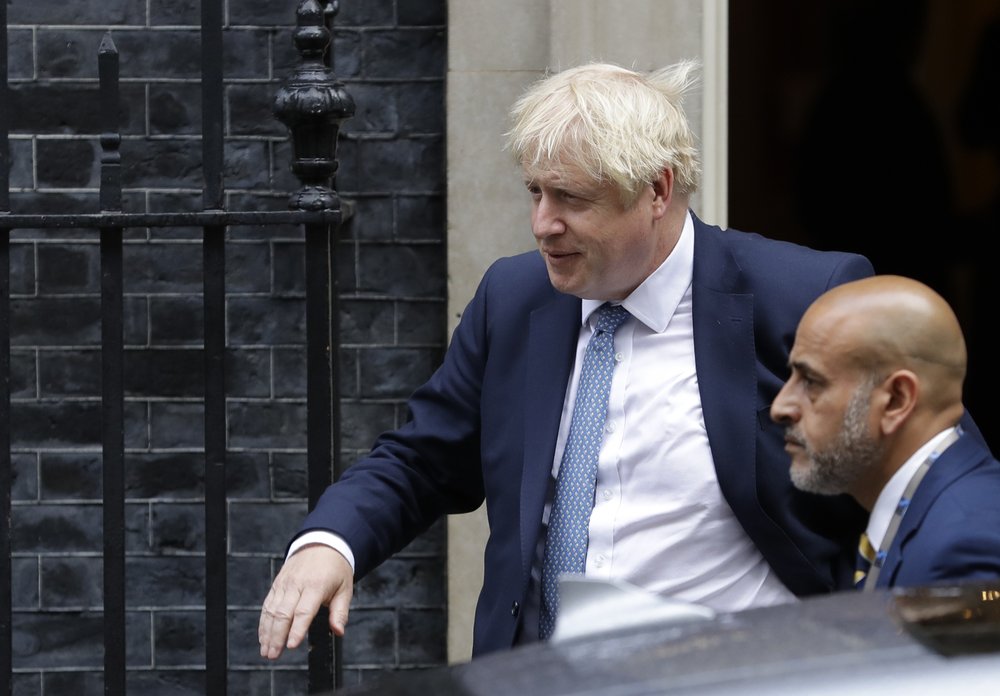 Britain's Prime Minister Boris Johnson leaves 10 Downing Street in London, September 26, 2019. An unrepentant Prime Minister Boris Johnson brushed off cries of "Resign!" and dared his foes to try to topple him Wednesday at a raucous session of Parliament, a day after Britain's highest court ruled he acted illegally in suspending the body ahead of the Brexit deadline. (Photo: AP)

Prime Minister Boris Johnson has come out fighting after a string of defeats, including a bruising blow from the country’s highest court, and while his combative stance is offending some, that may well be the point.

His strategy appears straightforward: ridicule Parliament as a bunch of weaklings wedded to the European Union and unwilling to follow the people’s mandate to pull the country out of the EU.

He may not be able to make good on his vow to make Brexit happen on Oct. 31, but he has positioned himself for the possible election ahead so that he can blame Parliament — and the EU’s supposed intransigence — for keeping Britain inside the bloc.

While Johnson is setting the stage for a “People-versus-Parliament” election, the reality is that the nation remains deeply split over the wisdom of leaving the EU, and the debate has become ever more shrill and angry, particularly after Britain’s Supreme Court unanimously declared earlier this week that the prime minister acted illegally in suspending Parliament for five weeks. The court said the suspension had the effect of squelching debate over Brexit.

On Wednesday, during a bitter session of Parliament, Johnson refused to apologize for breaking the law, and he accused his Brexit opponents of pursuing “surrender” and “humiliation” and betraying the people three years after they narrowly voted for Brexit in a nationwide referendum.

He also dared his opponents to seek a no-confidence vote and trigger a new election, though no one immediately took the bait.

Johnson’s gamble is that when a national vote is held, perhaps as early as November, Brexit backers will flock to him, while those who oppose it will be split among the opposition parties.

Former Labour Party leader Ed Miliband, who lost a bid for prime minister in 2015, said in Parliament on Thursday that Johnson’s inflammatory words are a “disgrace.”

Many of Johnson’s decisions are shaped by top adviser Dominic Cummings, an architect of the successful “leave” campaign in 2016. Cummings’ strategy in that pitched battle could offer clues to Johnson’s approach in the event of an election.

Cummings concocted the “leave” campaign’s slogan — “Take back control” — and helped shape misleading but effective messages, including the claim that Britain sends the EU 350 million pounds per week that could be given instead to the National Health Service to improve care.

For people dismayed by Britain’s uneven medical care, that claim gave hope that leaving the EU would make it easier for them to get a doctor’s appointment or a hospital test without a long wait.

Cummings also hired a data-mining firm that helped the “leave” campaign identify and connect with voters who had been overlooked.

Johnson, guided by Cummings, has taken note of U.S. President Donald Trump’s combative tactics and to a degree followed suit, challenging both Parliament and the court system.

The prime minister has refused to say he will comply with a new law that would require him to seek a Brexit extension if no deal is reached by mid-October. He has denounced the court decision on his suspension of Parliament. And he has refused to rule out suspending it again.