WORLD UK's May criticizes 'wrong' Trump tweets, but visit till on

UK's May criticizes 'wrong' Trump tweets, but visit till on 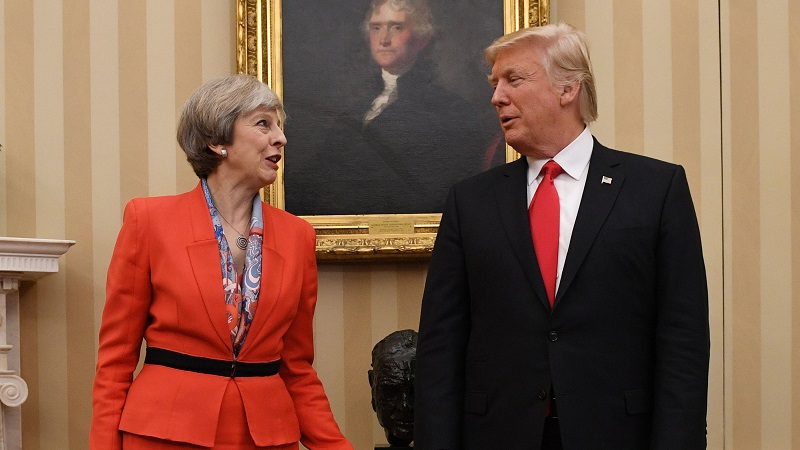 British Prime Minister Theresa May insisted Thursday that she is not afraid to criticize a key ally, saying US President Donald Trump's retweets of a "hateful" far-right group were "the wrong thing to do."

But May's government dug in its heels over mounting calls to cancel Trump's planned state visit to the U.K.

Trump's retweeting of anti-Muslim videos from far-right fringe group Britain First has been widely condemned in Britain. May's spokesman called the retweets "wrong," and the prime minister gave the same verdict on Thursday.

"The fact that we work together does not mean that we are afraid to say when we think that the United States have got it wrong and to be very clear with them," she said. "I am very clear that retweeting from Britain First was the wrong thing to do."

Speaking in Amman, Jordan, May said the anti-Islam, anti-immigrant group was "a hateful organization" that runs counter to "common British decency."

Trump responded to criticism from Britain with a tweet urging May to focus on "the destructive Radical Islamic Terrorism that is taking place within the United Kingdom," rather than on him.

May countered that "we take the need to deal with the terrorist threat very seriously."

May has sought to cultivate a close relationship with Trump, visiting him in Washington days after his inauguration in January and extending the offer of a state visit hosted by Queen Elizabeth II.

But the Twitter storm has prompted renewed calls for the trip to be called off. Trump had already faced strong opposition in Britain over his attempt to ban travel to the US from several majority-Muslim countries.

In the House of Commons on Thursday, multiple lawmakers stood to demand that the visit be scrapped.

London Mayor Sadiq Khan also joined the calls. He said Trump has promoted "a vile, extremist group" and an official visit by him to Britain "would not be welcomed."

May said the visit was still on — though she suggested it was not imminent.

"An invitation for a state visit has been extended and has been accepted," she said. "We have yet to set a date."

The retweets by Trump, who has almost 44 million Twitter followers, provided a huge boost to Britain First. The tiny but publicity-savvy group has staged direct-action protests at mosques and is active on social media. The group regularly posts inflammatory videos purporting to show violence by Muslims, without context or supporting information.

Several lawmakers called Thursday for the group to be banned.

"This government will not tolerate any groups that spread hate by demonizing those of other faiths or ethnicities," she said.