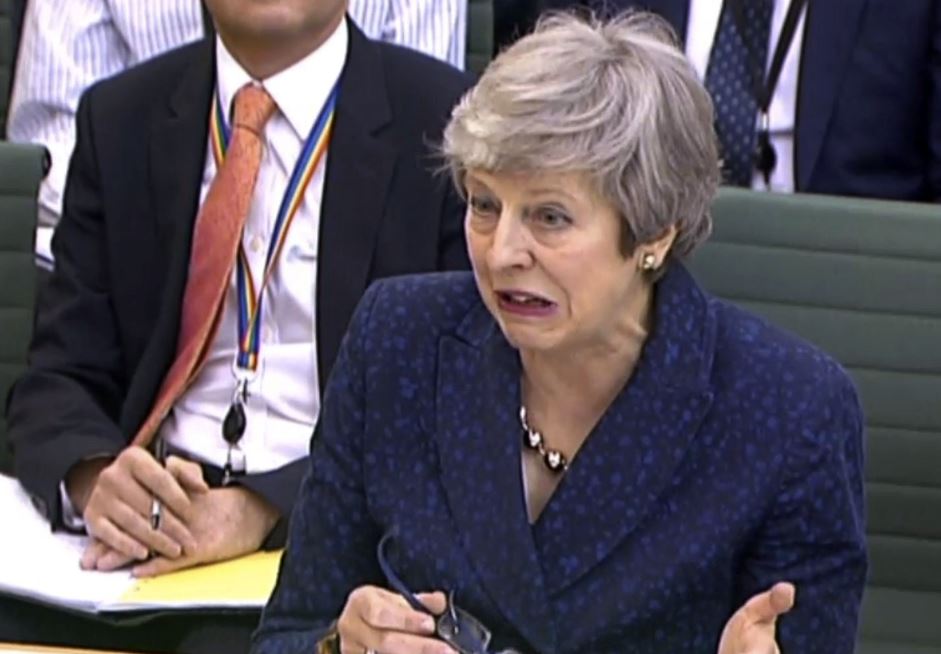 Britain's Prime Minister Theresa May gestures as she gives evidence to the Liaison Select Committee, in the House of Commons, London, Wednesday May 1, 2019. (Photo: AP)

Prime Minister Theresa May said Wednesday that she remains hopeful of ending Britain’s Brexit uncertainty “as soon as possible” by reaching agreement with the political opposition on terms for leaving the European Union.

May’s Conservative government struck a divorce deal with the EU late last year, but Britain’s Parliament has rejected it three times. May has failed to persuade many Brexit-backing lawmakers from her own Conservative Party to support an agreement that they think keeps Britain too tightly bound to the bloc’s rules.

The government has held several weeks of talks with the opposition Labour Party about reaching a compromise, but the meetings have not produced a breakthrough.

“We know that we need to end this uncertainty and do it as soon as possible and I hope a deal can be done,” May told a committee of lawmakers. “We certainly approach this with an open mind.”

But, she added: “We haven’t yet determined whether there is a landing zone that is going to be possible.”

The Conservatives and Labour remain divided over how close an economic relationship to seek with the EU after Brexit.

Labour insists the UK should remain in a customs union with the bloc to avoid barriers to trade. The government rejects the idea, arguing that accepting EU tariff rules would prevent Britain striking new trade deals around the world.

May said that if an agreement couldn’t be reached soon, the House of Commons would get to vote on a variety of Brexit options.

“We stand ready to abide by that decision if the opposition are willing to do so,” May said.

Britain voted in June 2016 to leave the EU. But its departure has been postponed from its originally scheduled date of March 29 until Oct. 31 amid political gridlock in London over the withdrawal terms.

The delayed departure has already caused economic uncertainty. It cost taxpayers tens of millions of pounds (dollars) Wednesday, as the government scrapped contracts with ferry companies to bring in essential goods in the event of a disruptive Brexit.

“Freight capacity contracts for the summer period are no longer needed and have therefore been terminated,” the Department for Transport said.

The ferries were part of the government’s planning for a “no-deal” Brexit in case Britain leaves the European Union without an agreement on divorce terms and future ties.

That could cause gridlock at ports by ripping up the trade rulebook and imposing tariffs, customs checks and other barriers between the UK and the EU, its biggest trading partner.

But the contracts came under fire earlier this year when it emerged that one firm involved had no ships and no experience running a ferry service.

Transport Secretary Chris Grayling defended the contracts, saying they had been a prudent “insurance policy.”

The department said the cost of canceling the deals is a bit lower than an estimate of 56 million pounds ($73 million) given by auditors.

The government also had to pay 33 million pounds ($43 million) to settle a lawsuit from cross-channel rail operator Eurotunnel, which alleged that it had been improperly excluded from bidding for post-Brexit freight contracts.

The government is also now being sued by P&O Ferries, which claims the payout to Eurotunnel puts it at a competitive disadvantage.