UK's May seeks compromise with Labour in EU divorce deal

British Prime Minister Theresa May sought a compromise Monday with opposition leader Jeremy Corbyn in hopes of securing his backing for a divorce deal with the European Union. 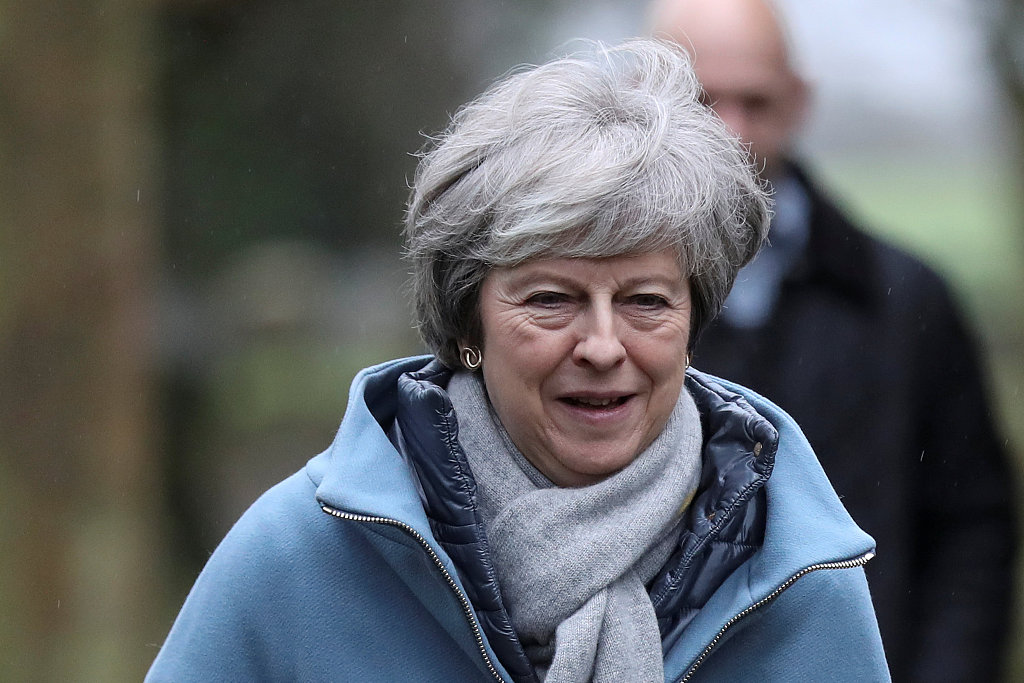 The political maneuvering comes amid strong signs that uncertainty over Brexit is already clamping down on Britain's economic growth.

Taking a cordial tone, May suggested further talks with the Labour Party leadership even as she said she did not see the advantage of permanent membership in the EU's customs union, a key demand Corbyn is seeking in exchange for backing her troubled Brexit bill in Parliament.

Justice Minister Rory Stewart told the BBC that differences between the two parties aren't as great as some suggest, but said the Conservative government can't accept Corbyn's customs union demand because it would prevent Britain from negotiating trade deals with other countries. He said May's agreement would achieve most of Corbyn's goals without preventing independent trade deals.

"I agree that the longer this goes on, the more risky it gets, obviously," Stewart said. "But, the solution to this has to be to get Jeremy Corbyn, or the Labour Party, or indeed Parliament as a whole, to come behind a deal."

Time pressure is mounting. Britain is due to leave the EU on March 29, but lawmakers in Parliament have emphatically rejected May's divorce deal, raising the prospect of a no-deal exit from the bloc unless more parliamentary support is found.

EU leaders have turned down May's plea to renegotiate parts of the legally binding Brexit withdrawal bill, making the no-deal outcome more likely even though both sides believe it would harm their economies.

May is to give a statement to Parliament on Tuesday, a day earlier than planned. Downing Street said that would give Parliament a few days to consider her remarks.

Lawmakers may be unnerved by the latest round of financial data, which showed Monday that Britain's economy slowed last year to its weakest growth rate since the global financial crisis.

The Office for National Statistics said the British economy grew by a quarterly rate of only 0.2 percent during the fourth quarter, down from the 0.6 percent uptick recorded in the previous three-month period.

In the fourth quarter, British business investment fell 1.4 percent for the fourth straight quarterly decline — the first time that has happened since the 2008 financial crisis.

With less than 50 days to go to Brexit day on March 29, British firms still have no idea what the country's new trading relationship with the EU will look like, so they're taking a safety-first approach.

Although Britain's Treasury chief Philip Hammond argued the British economy remains "fundamentally strong" and is "enjoying the longest unbroken quarterly growth streak" among the Group of Seven industrialized countries, he conceded that Brexit unease was taking its toll.

"There is no doubt that our economy is being overshadowed by the uncertainty created by the Brexit process," he told Sky News. "I'm afraid this has gone on longer than we would have liked."