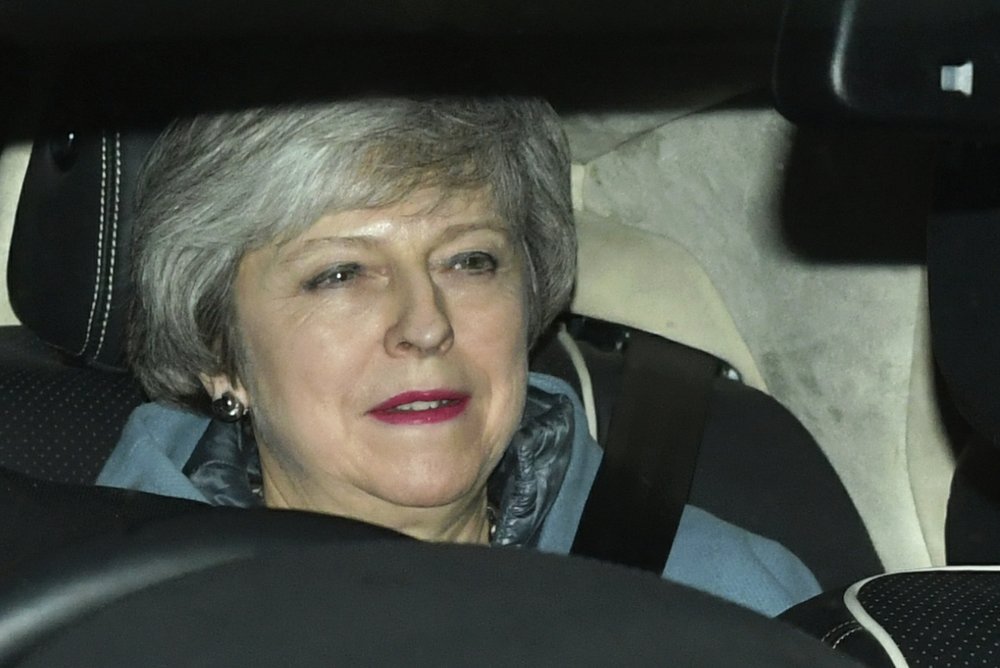 Britain's Prime Minister Theresa May leaves the Houses of Parliament in Westminster following a Brexit vote in the House of Commons, in London, Thursday Feb. 14, 2019. May suffered an embarrassing defeat by lawmakers Thursday in a vote that left her bid to secure a European Union divorce deal stuck between an intransigent EU and a resistant U.K. Parliament _ with Brexit just six weeks away. (Photo: AP)

British Prime Minister Theresa May suffered an embarrassing defeat by lawmakers Thursday in a vote that left her bid to secure a European Union divorce deal stuck between an intransigent EU and a resistant U.K. Parliament — with Brexit just six weeks away.

A rebellion by hard-core Brexit backers saw the House of Commons vote by 303 votes to 258 against a motion reiterating support for May’s approach to Brexit — support expressed by lawmakers in votes just two weeks ago.

The defeat is symbolic rather than binding, but shows how weak May’s hand is as she tries to secure changes to her divorce deal from the EU in order to win backing for it in Parliament. It is likely to leave EU leaders wondering whether May can win support for any kind of Brexit deal, given Britain’s political instability.

May tried to put a positive spin on the result. The prime minister’s office said in a statement that “while we didn’t secure the support of the Commons this evening,” the government believed Parliament still wanted May to seek changes to the Brexit deal that lawmakers could support.

“The government will continue to pursue this with the EU to ensure we leave on time on 29th March,” it said.

Two weeks ago, Parliament sent a contradictory message, voting to send May back to Brussels to seek changes to a section of the withdrawal agreement intended to ensure an open border between the U.K.’s Northern Ireland and EU member Ireland after Brexit.

But lawmakers also voted to rule out a “no-deal” exit, though without signaling how that should happen.

On Thursday the government was defeated on an uncontroversial-sounding motion reiterating the earlier decision, when hard-line pro-Brexit lawmakers in the governing Conservatives abstained, accusing the government of effectively ruling out the threat of leaving the EU without an agreement on departure terms and future relations, a move they say undermines Britain’s bargaining position.

“Conservative MPs (members of Parliament) really ought not to be associated with anything, express or implied, which seems to take ‘no deal’ off the table,” Brexit-backing Conservative lawmaker Steve Baker tweeted before the vote.

Pro-EU lawmakers in Britain’s divided Parliament feel the opposite. They fear time is running out to seal a deal before Britain topples off a “no-deal” cliff, with economically devastating results. But the Commons on Thursday rejected two amendments from the opposition that sought to postpone Brexit or steer the U.K. away from the cliff edge.

Lawmakers intent on averting a “no-deal” Brexit are gathering their strength to make a push in a new series of votes on Feb. 27 to force the government’s hand.

By then, Brexit will be only a month away.

May is struggling with little sign of success to win backing for the divorce deal she struck with the EU from both pro-Brexit and pro-EU lawmakers in Parliament, which rejected the agreement by a whopping 230 votes last month.

May has refused take a “no-deal” Brexit off the table as she attempts to win concessions from the bloc. Most businesses and economists say the British economy would be severely damaged if the country crashed out of the EU on the scheduled Brexit date of March 29 without a deal, bringing tariffs and other impediments to trade.

Jeremy Corbyn, who heads the main opposition Labour Party, accused May of sitting on her hands, “hoping that something will turn up that will save the day and save her face.”

Brexit Secretary Stephen Barclay told lawmakers that “the only way to avoid ‘no-deal’ is either to secure a deal on the terms the prime minister has set out” or to cancel Brexit - something the government says it won’t do.

The remaining 27 EU nations insist that the legally binding withdrawal agreement struck with May’s government in November can’t be renegotiated.

Leaders of the bloc have expressed exasperation at Britain’s desire for last-minute changes, and its failure, amid seemingly endless wrangling in the U.K. Parliament, to offer firm proposals.

Labour lawmaker Yvette Cooper said some British politicians were “living in a fantasy world” by believing a solution would magically appear.

“It’s as if we’re all standing around admiring the finery of the emperor’s new clothes and actually the emperor is running around stark naked and everyone is laughing at us — or at least they would be if it wasn’t so sad,” she said.