UK's May takes Brexit deal to cabinet as MPs revolt

British Prime Minister Theresa May will seek her cabinet's approval Wednesday for a long-awaited divorce deal with the EU but hardline Brexiteer MPs warned they will seek to block it in parliament. 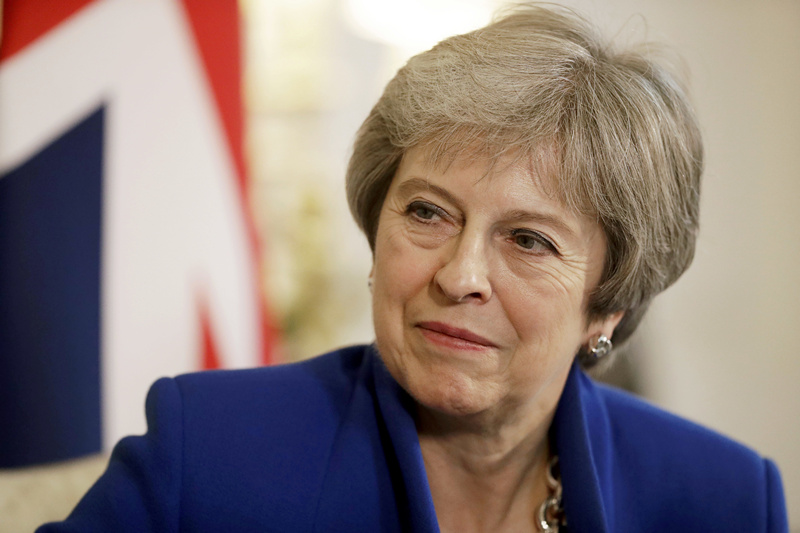 After months of talks, May's office announced late Tuesday that negotiators had finally struck a draft agreement on the terms of Britain's withdrawal from the European Union next March.

The pound surged following the news, which came just as Brussels stepped up preparations for a potentially catastrophic "no deal" exit.

But diplomats and officials warned the technical agreement, which runs to hundreds of pages, still needs political approval.

Ambassadors from the other 27 EU member states will meet later in Brussels, Ireland's Prime Minister Leo Varadkar will hold a cabinet meeting and May's ministers convene at 1400 GMT.

If the British cabinet approves the text, London is hoping for a special summit of EU leaders later this month to seal the deal.

But May has faced constant criticism from her Conservative MPs over her approach, and the deal had barely been announced when they took to the airwaves to denounce it, with many on the lookout for high-profile resignations.

Former foreign secretary Boris Johnson, who quit the cabinet over Brexit in July, said the deal would leave Britain a "vassal state" and urged his former colleagues to "chuck it out".

Former Brexit minister David Davis, who quit at the same time, said: "Cabinet and all Conservative MPs should stand up, be counted and say no to this capitulation."

Most ominously for May, the Northern Irish party which props up her government threatened to break their alliance over reports of a special arrangement for the British province.

"This is not the right Brexit," Jeffrey Donaldson of the Democratic Unionist Party (DUP) told BBC Radio's Today programme on Wednesday.

"It fundamentally undermines the constitutional and economic integrity of the UK -- the UK will be faced with the choice in the future, it wants to get out of this binding agreement, it will have to leave Northern Ireland behind."

All eyes were on whether eurosceptic ministers including Brexit Secretary Dominic Raab may join the chorus of disapproval and resign.

"We are clearly not out of the woods yet," the London-based Capital Economics research group said in a note to clients.

British and EU negotiators had stepped up their talks ahead of a deadline on Wednesday to get a deal in time to call the special summit for later this month.

Failure would delay the final settlement until a formal Brussels summit in mid-December, leaving little time for May to get the deal and associated legislation through parliament.

The talks were stuck for months on how to avoid border checks between British Northern Ireland and EU member Ireland, if and until London strikes a new trade deal with Brussels.

Ireland's RTE broadcaster reported that the final deal includes a so-called "backstop" arrangement in which the whole United Kingdom will remain in a customs arrangement with the EU.

It provides for additional "deeper" provisions for Northern Ireland on customs and regulations.

But it also reportedly allows for a review mechanism that Britain could use to try to leave the backstop arrangement -- a key demand of Conservative eurosceptics.

Pro-Brexit MPs like Johnson fear Britain could end up being tied to the EU indefinitely.

Reflecting the gravity of the moment, popular tabloid Daily Mail carried the front-page headline "Judgment Day", urging its centre-right readership to give the deal "a fair chance".

The pro-Brexit Daily Telegraph called it May's "moment of truth" while The Sun's editorial warned of a "betrayal" if Britain did not have the power to unilaterally leave the customs arrangement.

May's deputy David Lidington had earlier promised the government would publish legal analysis on the deal following pressure from Tories and the main opposition Labour party.

Labour leader Jeremy Corbyn said he would wait for details, but suggested the agreement was "unlikely to be a good deal for the country".

Other elements of the divorce already agreed include Britain's exit bill of around £39 billion (45 billion euros, $50 billion) as well as a guarantee on EU citizens' rights.

It also provides for a 21-month transition after Brexit during which London would follow EU rules while both sides negotiate a new trade relationship.