LONDON, April 4 (Xinhua) -- Britain's service sector in March saw the fastest decline in activity in more than two decades, as the novel coronavirus pandemic continues to take its toll on the industry. 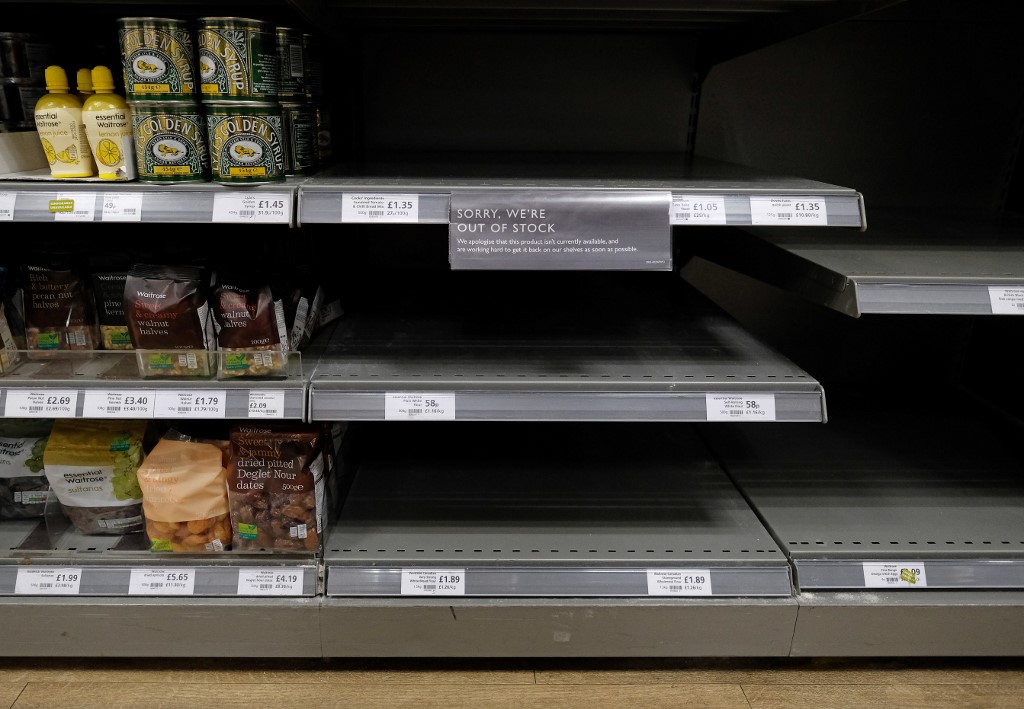 In this file photo taken on March 31, 2020 Empty shelves where packets of flour would normally be stocked are pictured below half-empty egg, and sugar stocks, inside a Waitrose supermarket store in north London. (Photo: AFP)

The seasonally adjusted purchasing managers' index (PMI) plunged to 34.5 in March, down sharply from 53.2 in February, said a joint report from the IHS Markit, a London-based global information provider, and the Chartered Institute of Procurement & Supply (CIPS), a British-based global procurement and supply organisation.

"This reading exceeded the previous record low seen at the height of the global financial crisis and signalled by far the fastest downturn in service sector output since the survey began in July 1996," said the report published Friday.

Collecting data between March 12 and March 27, the survey showed that sharp reductions in activity were broad-based across the sector during March, with only the technology services subcategory recording pockets of continued business expansion.

"Technology services were the only area to signal a rise in business activity, but even this pocket of growth looks fragile as new workloads dropped more quickly in this category than at any time since 2011," said Tim Moore, economics director at the IHS Markit.

Meanwhile, the UK Composite Output Index, which is a weighted average of the Manufacturing Output Index and the Services Business Activity Index, plummeted to 36.0 in March, down sharply from 53.0 in February and hitting the lowest level in more than two decades.

The services sector was sucked into a black hole and flung into the unknown by the forceful impact of the COVID-19 pandemic, affecting every area of supply chains from transport to purchasing levels and job creation, said Duncan Brock, group director at the CIPS.

"The likelihood of a global recession is now a given, though its duration and severity has yet to reveal itself. One thing is for certain, with the lowest business optimism for over 20 years, the immediate outlook for the services sector is beyond grim," said Brock.

The British government has pledged to offer self-employed people impacted financially by the pandemic with 80 percent of wages for at least three months up to 2,500 pounds (about 2,847.3 U.S. dollars) a month. For employees who are unable to work due to the outbreak, the government will cover 80 percent of their wages too, with a limitation of 2,500 pounds.

Prior to that, the government also announced a 330-billion-pound (about 375.9 billion dollars) package to help various scales of businesses to cope with the crisis.