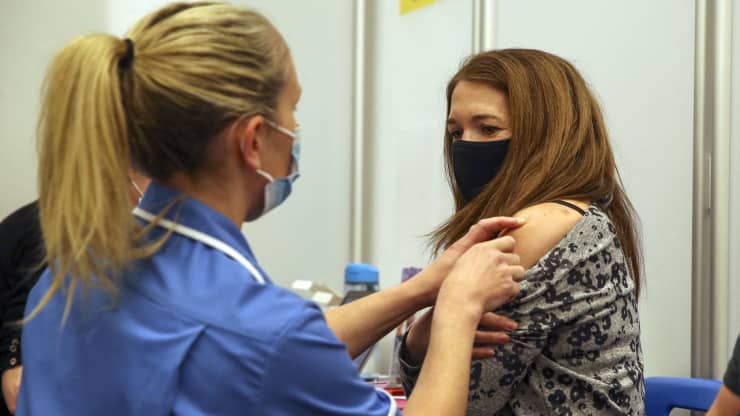 A woman receives an injection of the Moderna Covid-19 vaccine administered by nurse Amy Nash, at the Madejski Stadium in Reading, west of London on April 13, 2021. (Photo: AFP)

LONDON — British health authorities are aiming to vaccinate 15,000 people in one day at London’s Twickenham rugby stadium as part of a race to contain a fast-spreading coronavirus variant.

The strain, first identified in India, accounts for a majority of new cases in the U.K., which is seeing a rise in infections after weeks of decline. Scientists say the variant is more transmissible than even the previously dominant strain first found in the U.K. but current vaccines are effective against it.

Many scientists are urging the Conservative government to delay plans to lift social distancing and other restrictions on June 21, arguing that more people need to be vaccinated before measures can be eased safely. The government will announce its decision on June 14.

Three-quarters of U.K. adults have had one dose of a coronavirus vaccine, and almost half have had both doses.

The Twickenham walk-in vaccination center is offering jabs without an appointment on Monday to people from northwest London, a hotspot for the Indian-identified variant.

Health officials in the northwest England town of Bolton, which had the highest rates of the new variant, say infections are starting to fall after a mass testing and “surge vaccination” campaign.