Britain on Friday warned it may implement new checks on European Union fishing boats if France carries out its threats of retaliatory measures in a deepening row over post-Brexit access to waters. 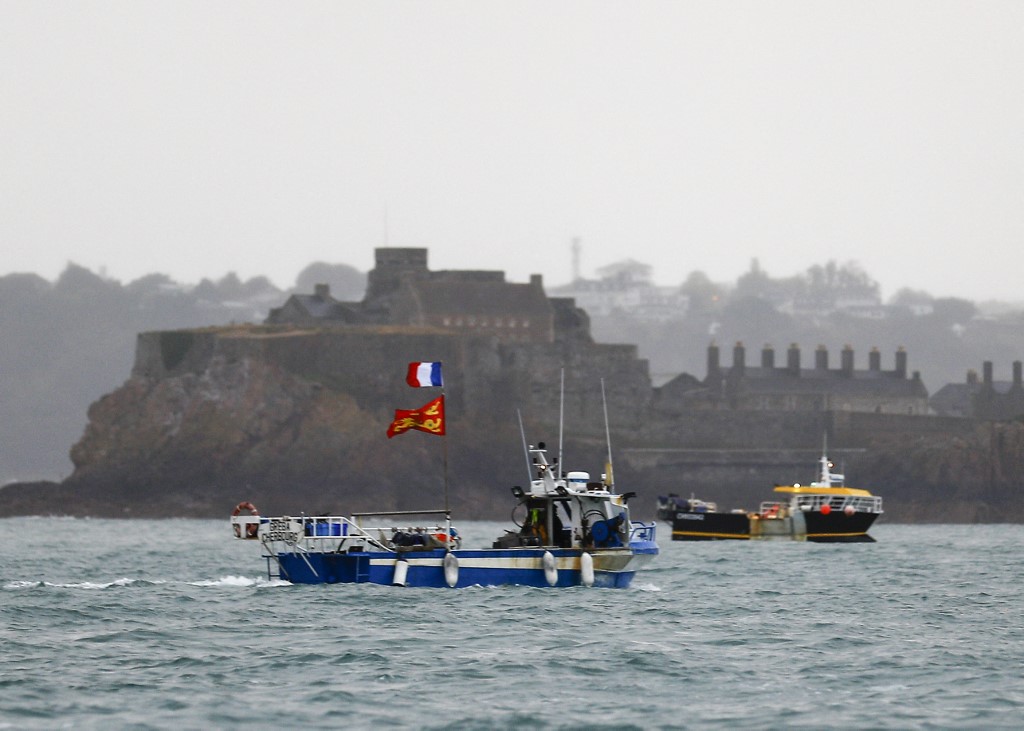 In this file photo taken on May 06, 2021 French fishing boats protest in front of the port of Saint Helier off the British island of Jersey to draw attention to what they see as unfair restrictions on their ability to fish in UK waters after Brexit, on May 6, 2021. (Photo: AFP)

French President Emmanuel Macron said that Britain's "credibility" was on the line in the dispute, accusing London of ignoring the Brexit deal agreed after years of tortuous negotiations.

"When you spend years negotiating a treaty and then a few months later you do the opposite of what was decided on the aspects that suit you the least, it is not a big sign of your credibility," he told the Financial Times.

But British Prime Minister Boris Johnson, who will hold brief face-to-face talks with Macron at the G20 summit in Rome this weekend, vowed to defend UK interests.

"We will do whatever is necessary to ensure UK interests," he told reporters on board his plane as he flew to the G20 summit in Rome.

However he added that "the ties that unite us, that bind us together are far stronger than the turbulence that currently exists in the relationship."

France is incensed that Britain and the self-governing islands of Jersey and Guernsey, which depend on London for defence and foreign affairs, have not issued some French boats licences to fish in their waters post-Brexit.

France's ambassador was summoned to London's Foreign Office over the row, and spent around 20 minutes with minister Wendy Morton, who "expressed concern over the unjustified measures announced by France earlier this week," according to the British government.

Frost "set out to the vice president our concerns about the unjustified measures announced by France earlier this week to disrupt UK fisheries and wider trade, to threaten energy supplies," the UK government said.

If the French actions were implemented as planned on November 2, Britain said the EU would be in breach of their Brexit deal.

"The government is accordingly considering the possibility, in those circumstances, of launching dispute settlement proceedings... and other practical responses," it added.

French prosecutors on Friday ordered a trial for the captain of a British trawler detained on charges of operating without a licence.

French authorities seized the vessel at the northern port of Le Havre on Wednesday, accusing it of scooping up more than two tons of scallops in France's waters without a proper permit.

Andrew Brown of Scotland-based Macduff Shellfish, which owns the trawler, said he believed it had the proper licence and suggested there may have been an "administrative misunderstanding".

France has warned that unless licences are approved it will ban UK boats from unloading their catches at French ports from next week and impose checks on all products brought to France from Britain.

Officials have also suggested that France could hike electricity prices for Jersey, which relies on mainland France for its power supplies.

Asked about the claim by France's Europe Minister Clement Beaune that the only language Britain understood was "the language of force," UK environment minister George Eustice told the BBC: "That is completely inflammatory and is the wrong way to go about things."

French fleets accuse officials in Britain and its dependency of Jersey of using Brexit as an excuse to stop them securing licences for waters they say they have plied for years.

London has denied the claims. But the threatened French measures could quickly have an impact since the British fishing industry depends on French ports as a gateway to Europe, its main export market.

Tensions over the licence requests had already spiralled into a brief naval standoff in May, when dozens of French trawlers massed in front of the Saint Helier harbour in Jersey.

Fears of a blockade prompted Boris Johnson to send two Royal Navy gunboats to the area, with France then sending two of its own coastal patrol vessels before the French trawlers retreated.

The European Union has said talks will continue with both sides on resolving the dispute, with France seeking support from fellow members of the 27-member club.