UK to ease lockdown next week, will test vaccine passports

Britain’s slow but steady march out of a three-month lockdown remains on track even as coronavirus cases surge elsewhere in Europe, Prime Minister Boris Johnson announced Monday, as he confirmed that businesses from barbers to bookstores will be allowed to reopen next week. 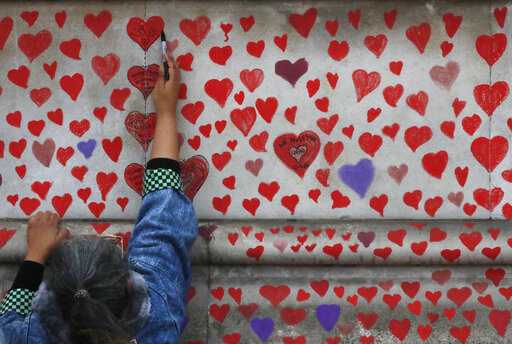 People paint red hearts onto the COVID-19 Memorial Wall mourning those who have died, opposite the Houses of Parliament on the Embankment in London, Monday, April 5, 2021. (Photo: AP)

Johnson said it’s too soon to decide, however, whether U.K. residents will be able to have summer trips abroad. He confirmed that the government will test out a contentious “vaccine passport” system — a way for people to offer proof they have protection from COVID-19 — as a tool to help travel and large events return safely.

Four weeks after England took its first step out of lockdown by reopening schools, Johnson said Britain’s vaccination program was proceeding well and infections were falling. He said the next step would come as planned on April 12, with the reopening of hairdressers, beauty salons, gyms, nonessential shops and bar and restaurant patios.

“We set out our road map and we’re sticking to it,” Johnson said during a news conference.

But, he added, “We can’t be complacent. We can see the waves of sickness afflicting other countries, and we’ve seen how this story goes.”

A ban on overnight stays away from home in England will also be lifted April 12, and outdoor venues such as zoos and drive-in cinemas can operate again.

Scotland, Wales and Northern Ireland are following similar but slightly different paths out of lockdown.

Britain has recorded almost 127,000 coronavirus deaths, the highest toll in Europe. But infections and deaths both have fallen sharply during the current lockdown and since the start of a vaccination campaign that has given a first dose to more than 31 million people, or six in 10 adults.

The government aims to give all adults at least one shot of vaccine by July, and hopes that a combination of vaccination and mass testing will allow indoor socializing and large-scale events to return.

It says all adults and children in England will be encouraged to have routine coronavirus tests twice a week as a way to stamp out new outbreaks. The government said free lateral flow tests will be available free starting Friday by mail, from pharmacies and in workplaces.

Lateral flow tests give results in minutes but are less accurate than the PCR swab tests used to officially confirm cases of COVID-19. But the government insists they are reliable and will help find people who contract the virus but don't have symptoms.

Britons are currently banned by law from going on holiday abroad under the extraordinary powers Parliament has given the government to fight the pandemic. The government said Monday it won’t lift the travel ban before May 17 — and maybe later.

“The government hopes people will be able to travel to and from the U.K. to take a summer holiday this year, but it is still too soon to know what is possible,” it said in an official update.

Once travel resumes, Britain will rank countries on a traffic-light system as green, yellow or red based on their level of vaccinations, infections and worrying new virus variants. People arriving from “green” countries will have to be tested but won’t face quarantine.

The government also is testing a system of “COVID-status certification” — often dubbed “vaccine passports” — that would allow people seeking to travel or attend events to show they either have received a coronavirus vaccine, tested negative for the virus, or recently had COVID-19 and therefore have some immunity.

A series of events will start this month, including soccer matches, comedy shows and marathon races. The government said the first events will rely only on testing, “but in later pilots vaccination and acquired immunity are expected to be alternative ways to demonstrate status.”

The issue of vaccine passports has been hotly debated around the world, raising questions about how much governments, employers and venues have a right to know about a person’s virus status. The idea is opposed by a wide swath of British lawmakers, from left-of-center opposition politicians to members of Johnson’s Conservative Party, and the policy could face stiff opposition when it is put before Parliament later this month.

The government said vaccine passports were all but unavoidable, since many countries were certain to demand proof of COVID-19 status for entry. And it said barring British businesses from asking customers for similar proof would be "an unjustified intrusion on how businesses choose to make their premises safe.”

The government said, however, that vaccine passports would never be needed to access “essential public services, public transport and essential shops.”

"We're some way off finalizing any plans for COVID-certification in the U.K.," he said.