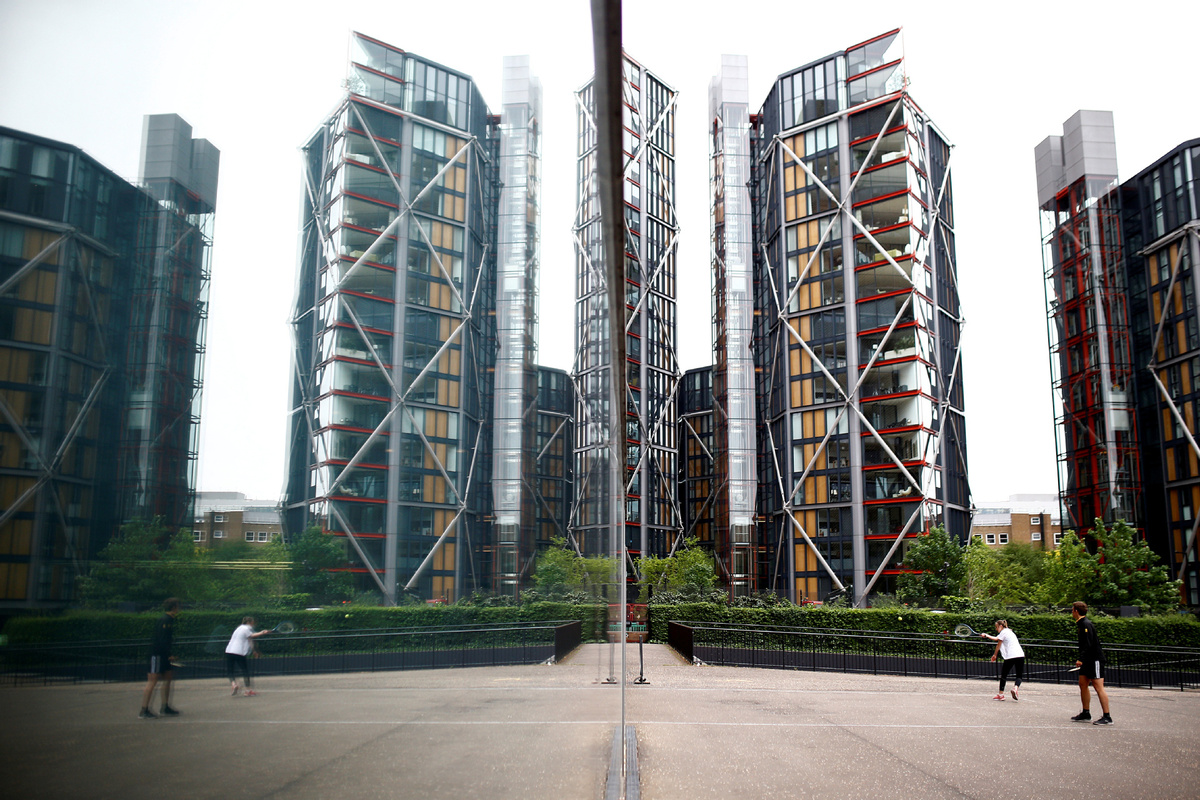 People playing tennis against a wall of the Tate Modern building are reflected in glass following the outbreak of the coronavirus disease (COVID-19), London, Britain, May 10, 2020. (Photo: Agencies)

The seriousness of the United Kingdom's novel coronavirus outbreak will soon be described by a constantly updating sliding scale, so people can see at a glance whether things are improving or worsening.

The five-point threat-monitoring system was scheduled to be among items unveiled by Prime Minister Boris Johnson during a televised address on Sunday evening.

The BBC said the government will use the scale for its novel coronavirus decision-making.

Johnson has also unveiled a new official slogan, which urges people to "stay alert, control the virus, save lives". The mantra will replace one that calls on people to "stay at home, protect the NHS, save lives", which will be less relevant after the nation's lockdown is loosened and people return to their workplaces.

Johnson explained in the Sun on Sunday newspaper that the changes are needed because the nation is entering a new, dangerous phase now that the number of deaths has passed the peak.

"Mountaineers always say that coming down from the peak is the most dangerous bit," he said. "That's when you're liable to be over-confident and make mistakes."

Because of that need for caution, the government is not expected to announce a significant loosening of the lockdown that began on March 23.

The BBC says the threat-monitoring system will be similar to one already in place to indicate the threat posed by terrorism.

Communities Secretary Robert Jenrick said on the Andrew Marr Show that the system and new slogan are part of an attempt to deliver a more complex message.

"Stay alert will mean stay alert by staying home as much as possible, but stay alert when you do go out by maintaining social distancing, washing your hands, respecting others in the workplace and the other settings that you'll go to," he said.

The opposition Labour Party said the more complex slogan may confuse people, with shadow health secretary Jonathan Ashworth saying "there is no room for nuance".

The devolved governments of Scotland, Wales, and Northern Ireland have all said they will not adopt the new slogan. They have also not yet committed to the threat-monitoring system that will be part of the Johnson government's toolkit to be used after the lockdown is loosened.

Scotland's first minister, Nicola Sturgeon, criticized Johnson during her daily news briefing for not informing her in advance of his plans and for her having to find out about his proposals from journalists.

She said: "We should not be reading of each other's plans for first time in newspapers."

But she welcomed the idea of different parts of the UK formulating different virus responses after hearing that the threat-monitoring system will be sensitive to regional differences, allowing local authorities in different regions to tailor their responses.

The threat-monitoring system will be used in conjunction with other tools, including a contact tracing app that will monitor people's proximity to those with the virus that is being trialed on the Isle of Wight.

The government is also studying similar apps developed by other nations.

Johnson's government is under enormous pressure from business groups to loosen the lockdown. But Downing Street fears a premature loosening would lead to a second spike in infections and a re-imposed lockdown.

The nation will also need a robust testing system to be in place before it can significantly ease the lockdown, one that identifies those who have the virus on a grand scale. People who test positive will then be tracked, to identify who they have been in contact with.

But the efficiency of the nation's testing system was questioned again when the Sunday Telegraph newspaper revealed 50,000 novel coronavirus test kits were sent to the United States for processing because of "operational issues" at laboratories in the UK. The nation has set itself the target of administering 100,000 tests a day but has rarely managed the feat.

On Sunday, the government revealed a further 269 deaths involving COVID-19, taking the total to 31,855. On Saturday, 346 deaths were attributed to the disease.

The Tiger Eye goggles were bought in 2009 during the H1N1 pandemic but offer inadequate splash protection for this pandemic.

In addition to criticism because of the goggle recall, the aviation industry slammed Johnson's administration on the weekend after reports emerged in The Times newspaper that the country will introduce a compulsory 14-day quarantine for people arriving from overseas at the nation's airports, train stations, and sea ports.

The Guardian newspaper said industry group Airlines UK believes the requirement will be in place by late May or early June with a spokesman saying: "We will be asking for assurances that this decision has been led by the science and that government has a credible exit plan."

Karen Dee, chief executive of the Airport Operators Association, said the requirement would have "a devastating impact" on the sector and urged the government to "act decisively to protect the hundreds of thousands of airport-related and travel-related jobs across the UK" with measures including the granting of immediate business rates relief and exemption from Civil Aviation Authority charges.