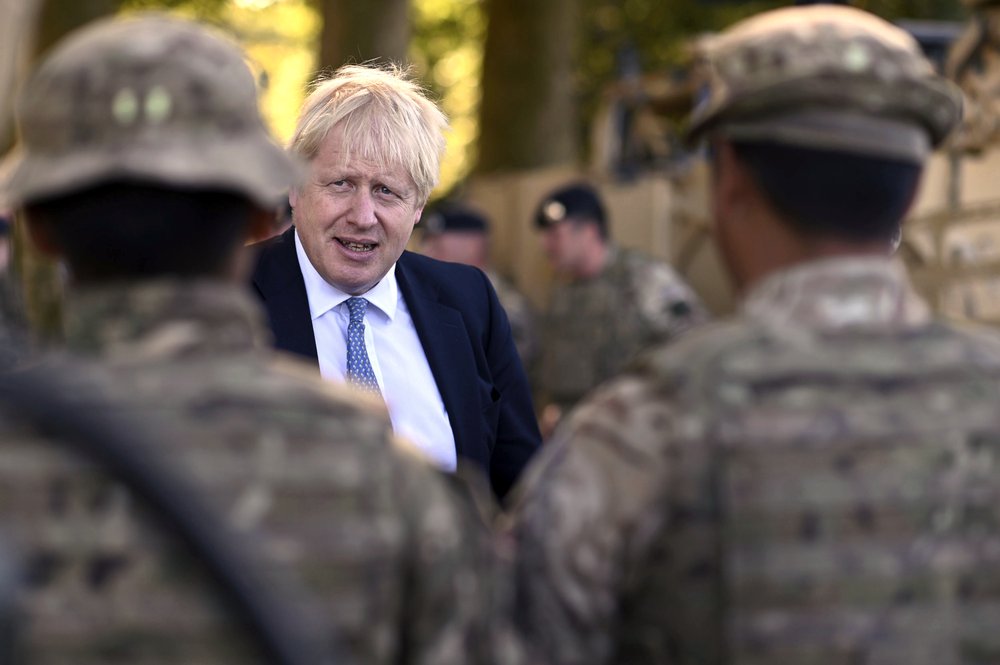 Britain's Prime Minister Boris Johnson talks to Ghurkas as he meets with military personnel on Salisbury Plain training area near Salisbury, England, September 19, 2019. British Prime Minister Boris Johnson was accused by a one of the country’s former leaders of a “conspicuous” failure to explain why he suspended Parliament for five weeks, as a landmark Brexit case at the UK Supreme Court came to a head on Thursday. (Photo: AP)

British Prime Minister Boris Johnson was accused by one of the country’s former leaders of obstructing Parliament by shutting down the legislature for five weeks, as a landmark legal challenge to the suspension wrapped up Thursday at the U.K. Supreme Court.

But a government lawyer warned the country’s most senior judges, who will rule next week on whether the prime minister broke the law, not to enter a “minefield” by meddling in political decisions.

Meanwhile, the European Union and Britain announced new talks on an elusive Brexit divorce deal — even as they squabbled over whether or not the U.K. had brought any new ideas to the table.

The U.K.’s top court must decide whether Johnson acted illegally by sending lawmakers home just weeks before the country is due to leave the EU on Oct. 31. At the end of a three-day hearing the court’s president, Brenda Hale, said the 11 judges would give their ruling early next week.

Opponents of the government claim Johnson unlawfully shut Parliament until Oct. 14 to prevent lawmakers from scrutinizing his plan to take Britain out of the EU at the end of next month, with or without a divorce deal. They also accuse the prime minister of misleading Queen Elizabeth II, whose formal approval was needed to suspend the legislature.

“The remedy that we seek is a declaration that the prime minister’s advice to Her Majesty was unlawful,” said David Pannick, lawyer for one of the campaigners challenging the government.

The challengers are being backed by John Major, who was Britain’s prime minister between 1990 and 1997 — and, like Johnson, is a Conservative.

In a written submission, Major said Johnson had not provided a sworn statement explaining the reasons for suspending Parliament, and argued that “his failure or refusal to do so is conspicuous.”

Major said the inescapable conclusion was that “the decision was in fact substantially motivated by a desire to obstruct Parliament from interfering with the prime minister’s plans.”

The government says the suspension is routine and not motivated by Brexit, and argues that judges should not interfere in political decisions for fear of upsetting the delicate balance of powers between legislature, executive and judiciary in Britain’s largely unwritten constitution.

Government lawyer Richard Keen said the prime minister’s opponents were “inviting the courts into forbidden territory and into what is essentially a minefield.”

Hale, the country’s most senior judge, agreed that “none of this is easy.”

She said the court would give its answer “as soon as it humanly can” and was aiming for early next week.

The case has drawn intense interest, with millions watching the Supreme Court’s livestream as lawyers cited case law and precedent stretching back to the 17th century. Rival pro-EU and pro-Brexit demonstrators gathered daily outside the courthouse on London’s Parliament Square.

Although it has become a Brexit flashpoint, Hale stressed that “this case is not about when and on what terms the United Kingdom leaves the European Union.”

“The result of this case will not determine that,” she said. “We are solely concerned with the lawfulness of the prime minister’s decision to advise Her Majesty to prorogue Parliament on the dates in question.”

If the court rules that the suspension was illegal, Johnson could be forced to call lawmakers back to Parliament immediately.

It’s not clear what they would do there, since there is no business scheduled. But lawmakers could use the time to pass new laws aimed at directing the course of Brexit. It already did so just before it was suspended, legislating that the government must seek a three-month delay of Brexit if it can’t get a divorce deal by late October.

Johnson says he will not seek a delay under any circumstances, though it’s not clear how he could avoid it.

The government could also start the new session of Parliament — currently scheduled to begin Oct. 14 — earlier than planned. It also has not ruled out trying to suspend Parliament for a second time.

Asked about the case on Thursday, Johnson said “I have the greatest respect for the judiciary in this country.”

“I will wait to see what transpires,” he said.

Losing the court case would be a new blow for Johnson, who is battling to fulfill his pledge to lead Britain out of the EU on the scheduled date of Oct. 31 come what may.

Johnson insists he is working hard to get an agreement with the EU that will ensure a smooth departure. EU leaders are skeptical of that claim, saying the U.K. has not produced any concrete proposals.

Finland’s Prime Minister Antti Rinne warned that “it’s all over” if Britain doesn’t come up with solid new Brexit proposals by the end of the month.

Finland currently holds the rotating presidency of the 28-nation bloc.

Britain says it has not revealed detailed proposals because they would likely leak, to the detriment of negotiations. But the government insisted Thursday it had sent “confidential technical non-papers which reflect the ideas the U.K. has been putting forward.” Non-papers are documents intended for discussion, rather than formal proposals.

The British government said in a statement it would not meet an “artificial deadline” but would make formal submissions “when we are ready.”

The EU confirmed it had received new documents from Britain relating to ways of maintaining an open border between EU member Ireland and the U.K.’s Northern Ireland — the key sticking point to a deal.

Britain has suggested implementing what it calls “alternative arrangements” — a mix of technology to replace border checks and a common area for agricultural products and animals covering the whole island of Ireland.

Barclay insisted that the six weeks until Oct. 31 were “sufficient for a deal” if both sides provided “creative and flexible solutions.”

“A rigid approach now at this point is no way to progress a deal and the responsibility sits with both sides to find a solution,” he said during a visit to Madrid.