UK under fire as Brexit trade talks resume with EU 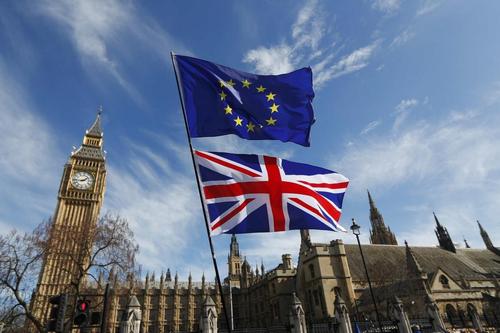 Prime Minister Boris Johnson has angered EU officials by insisting there was now an "unforeseen" risk that Northern Ireland would be cut off from the rest of the United Kingdom.

His proposal for "limited" changes to domestic legislation sparked concern London could renege on the treaty it signed with the EU that allowed Britain's departure from the bloc.

His comments in the Daily Telegraph stood in sharp contrast to his boast that the Withdrawal Agreement was a "fantastic moment" when he signed it in January.

Britain left the 27-member EU on January 31 but remains bound by its rules until December 31 as it tries to thrash out the terms of a new trading relationship.

Both sides agree a deal must be struck by an EU summit in mid-October. But divisions remain on totemic issues such as state subsidies for industry and fishing rights.

Irish prime minister Micheal Martin said he was "concerned about the lateness" of London's proposed changes to the Northern Ireland Protocol, a key plank of the agreement.

"The Withdrawal Agreement is an international treaty and we expect the UK government to implement and to adhere to what was agreed," he told the Irish Examiner newspaper.

"We trust them to do so or they would render the talks process null and void."

Martin ruled out the return of a hard border between Ireland and Northern Ireland, a key part of the 1998 Good Friday Agreement that ended 30 years of violence over British rule in the province.

Northern Ireland will have Britain's only land border with the EU, and the Brexit protocol means the territory will continue to follow some of the bloc's rules to ensure the frontier remains open.

Johnson's spokesman insisted the government remained fully behind the Good Friday pact, arguing the planned legislative changes were a "safety net" to ensure a smooth passage for goods going to and from Northern Ireland after January 1.

But the EU, and anti-Brexit parties in Northern Ireland and Britain, fear Johnson is setting the stage to jettison the transition talks and go its own way, whatever the economic cost.

EU chief negotiator Michel Barnier vowed to interrogate his British counterpart, David Frost, about the plans when they meet from Tuesday afternoon.

"Everything that has been signed must be respected," the Frenchman said.

Heading into the meeting, which lasts until Thursday, Frost warned: "We need to see more realism from the EU about our status as an independent country".

Barnier last week underlined that full implementation of prior deals was "the only way to protect the Good Friday Agreement in all its dimensions".

"And, of course, it is a precondition for us -– the EU and the UK -– to be able to forge a meaningful partnership built on trust."

The government is due to submit the changes to parliament on Wednesday, with warnings it will breach international law if it overrode the Withdrawal Agreement.

Tim Bale, deputy director of the UK In A Changing Europe research group, suggested the move could be a "negotiating ploy" to put pressure on Brussels.

The Attorney General's Office though, confirmed the head of the government's legal department had resigned over the changes, while US politicians also warned of repercussions.

Democratic congressman Brendan Boyle on Tuesday agreed, saying it would have "consequences well beyond trust dealings with the EU".

It would be "very difficult to enter into a trade negotiation with a party that would have just ripped up a very important agreement to us", he told BBC radio.

"They might just turn around and use the same tactic against you."