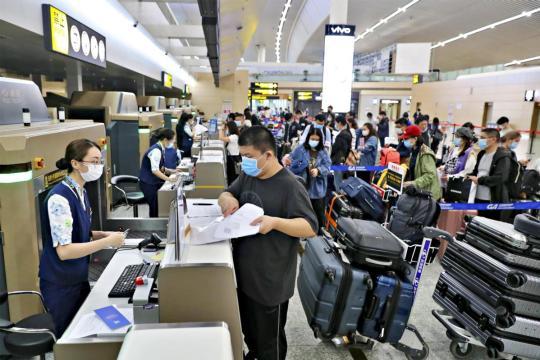 Many universities in the United Kingdom are chartering flights to help bring thousands of Chinese students to study in the country despite the COVID-19 pandemic.

An education expert said that as China is the UK's largest source of international students, such arrangements could become "normal procedure" in coming years.

The pandemic has caused widespread disruption to international travel, with only a limited number of flights operating between the two countries.

However, this has not stopped efforts being made by UK higher education institutions to overcome such restrictions and arrange flights to bring in students from China－attempts mainly aimed at buoying tuition revenue.

Last month, a flight chartered by Queen's University Belfast, carrying 369 students from China on one-way tickets costing ￡616($795), landed in Belfast, the capital of Northern Ireland. The university was one of the first in the UK to arrange a direct charter flight and airport transfers to bring students directly to its campus.

It was the first such flight operated by a Chinese airline to take students from the country back to schools overseas. During the next two months, the airline is expected to fly some 20,000 Chinese students from across the country out of Chongqing to Manchester or Bristol, in western England.