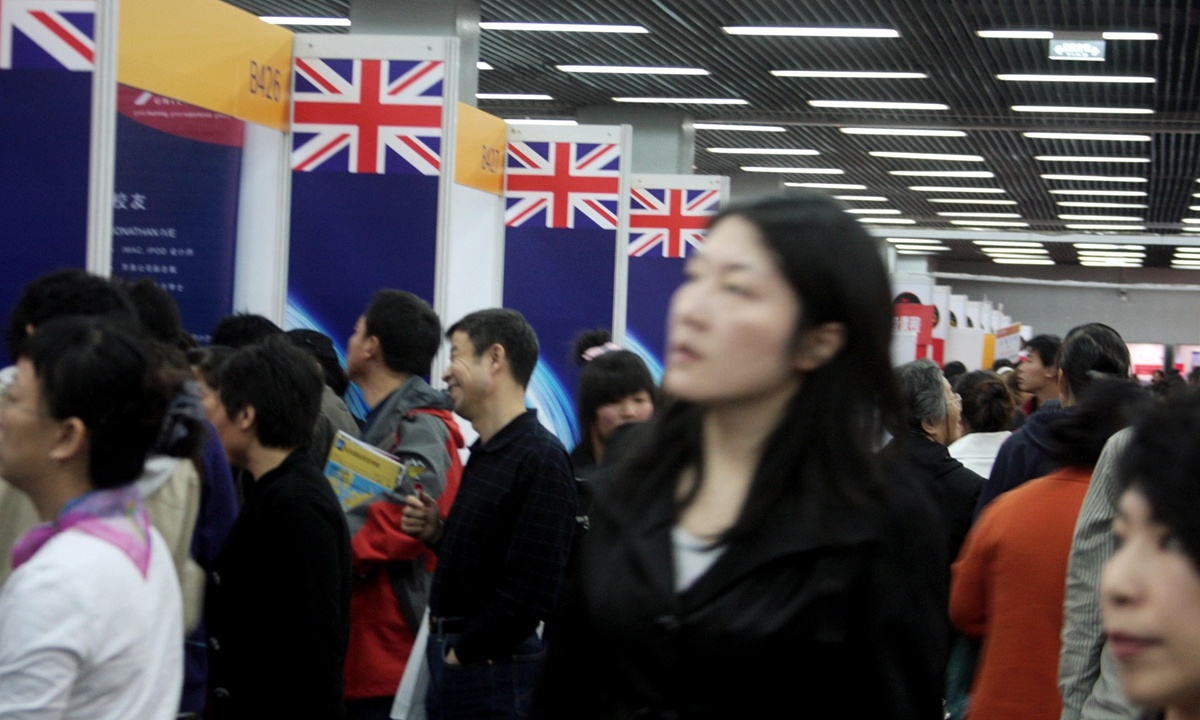 The UK is unlikely to follow the path of the US government in restricting Chinese students, a major source of revenue for the UK education market.

But the discrimination against certain Chinese students reflects the fear of some Western countries to China's emerging economic power, Chinese experts said on Tuesday.

The comments come after UK media, The Times, reported on Thursday that the Foreign, Commonwealth and Development Office (FCDO) will, starting Thursday, "expand the remit" of its security vetting for foreign postgraduates applying to "sensitive subjects" on so-called "national security."

Wu Qing, general secretary of China Youth Talents Research Association, told the Global Times on Monday that the scheme affects every foreign postgraduate. And even if it aimed at Chinese students, the UK government is unlikely to totally follow the steps of the US -- shut the door to a large number of Chinese students -- as the students will provide huge financial benefits to the country's education industry.

He pointed that the move might further discourage Chinese students from studying in the UK amid the global coronavirus pandemic.

Data released by the Higher Education Statistics Agency (HESE) shows more than 120,000 Chinese students were enrolled in the UK in the 2018-19 academic year.

US authorities said only 145 student visas (F-1) were issued to Chinese mainland residents in July this year due to "political restrictions" and "declining popularity" due to heighted China-US tensions.

Yu Guoming, a professor at the School of Journalism and Communication of Renmin University of China, told the Global Times that restricting Chinese students from certain "sensitive subjects," and banning the use of Huawei's 5G technology reflects their fear of China's improved economic position in the world and their distrust of China. But "it will not be a problem as long as our students follow regulations, and build a trust through greater communications."

FCDO website said "the subjects are those where students' knowledge could be used in programs to develop Advanced Conventional Military Technology, weapons of mass destruction, or their means of delivery."

Liu Mai, a teacher at an education institute based in East China's Zhejiang Province, told the Global Times that her students' British visas are generally not reviewed, but those who mainly apply for civil engineering and mechanical engineering in the US are more likely to be required to submit additional documents.

"They suspect that the students going to the US for further study may have other purposes," Liu said.

Ni Yue, a 28-year-old man who was accepted to the MSc Bioengineering: Biomaterials and Biomechanics program at University of Nottingham, told the Global Times that due to the ongoing COVID-19 pandemic, he delayed his postgraduate studies for a year, but the school has not requested him to apply for the ATAS yet.

"If I do not get the visa because of so-called 'national security', I will consider going to other countries," Ni said.