UK vacationers slam decision to put them into 14 days isolation 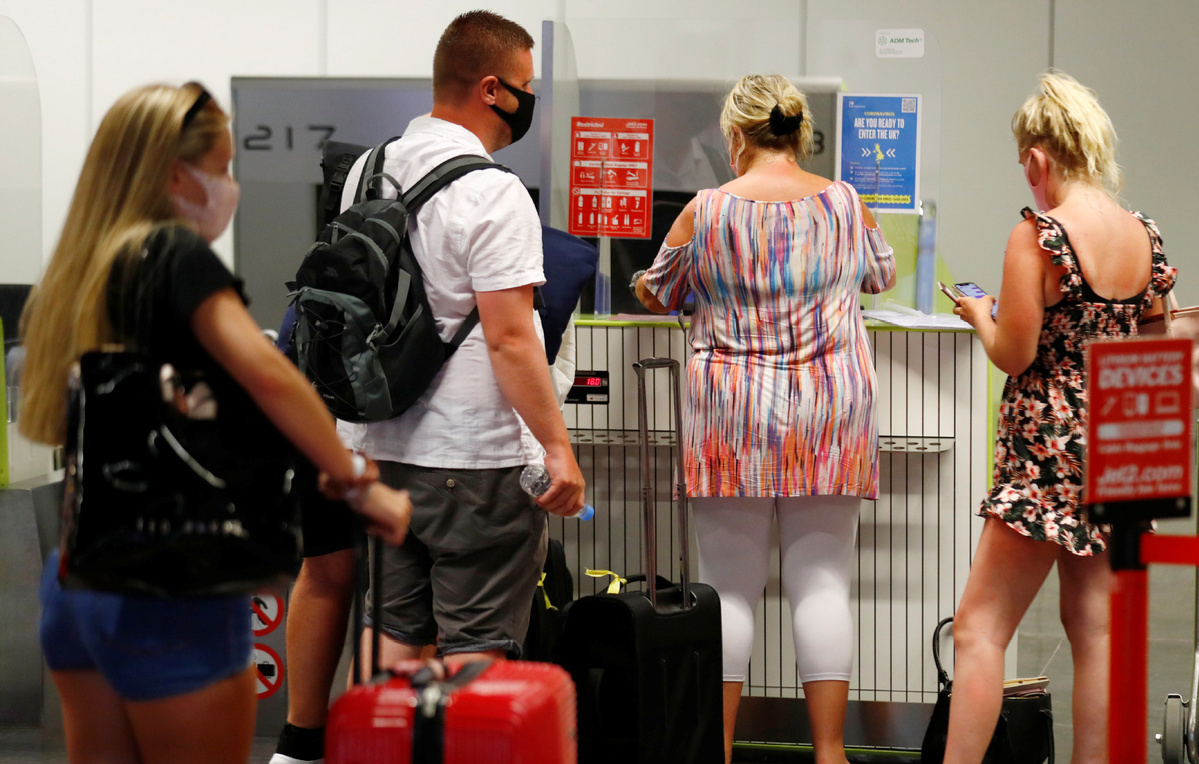 British tourists returning to UK, check in their luggage, as Britain imposed a two-week quarantine on all travellers arriving from Spain, following the coronavirus disease (COVID-19) outbreak, at Gran Canaria Airport, on the island of Gran Canaria, Spain July 25, 2020. (Photo: Agencies)

British holidaymakers who jetted off to Spain last week have expressed fury at the United Kingdom government's hasty imposition of new rules that mean they must complete 14 days of quarantine upon their return home.

Chris Riordan, from the English county of Essex, only arrived in Spain on Thursday. He told Sky News the possibility of a novel coronavirus-inspired quarantine upon his return to the UK had not been mentioned before he left, or he would likely have stayed home.

"We wouldn't have traveled if we knew there was going to be any possibility of (this) happening," he said after London announced on Saturday that arrivals from Spain would have to isolate themselves for 14 days after their return as a result of a spike in infections in Spain.

"You cannot walk along a street without a mask, you sanitize your hands before you enter every shop, supermarket, or restaurant," he added.

But the UK government said it could not risk holidaymakers returning and spreading the COVID-19 disease after Spain recorded 971 infections on Thursday and 922 on Friday following very low rates of infection the week before. The Spanish government said it fears the nation could be headed toward a feared second wave of infections, a concern shared by the governments of Belgium, France, and Germany, which have also seen recent spikes in infections.

The quarantine, which applies to people arriving in the UK from not only the Spanish mainland but also the Canary Islands and the Balearic Islands, will have been particularly bad news for people who are not working from home but who are expected back in the workplace after their holiday.

The BBC reported that British Airways said the sudden imposition of a quarantine was "yet another blow "to the industry, while the Association of British Travel Agents said it was "disappointing".

Jonathan Van-Tam, England's deputy chief medical officer, said there can never be a good time for such measures to be introduced.

"Whenever a decision is made, there will always be people who have just left the UK," he said. "So, there is no magic time at which to do this. The thing that we have to do is do it as soon as we are certain about the data."

The Foreign Office added that UK residents should avoid traveling to Spain.

Meanwhile, an analysis by Public Health England of existing studies has confirmed the suspicion that people who are overweight are at a higher risk of becoming seriously ill or dying after contracting the novel coronavirus.

Alison Tedstone, chief nutritionist at Public Health England, told the BBC: "Losing weight can bring huge benefits for health－and may also help protect against the health risks of COVID-19. The case for action on obesity has never been stronger."

The UK has one of the highest rates of obesity in Europe, which may account for its above-average COVID-19 death count; facts that are understood to have prompted Prime Minister Boris Johnson to want to tackle the so-called obesity crisis. He is expected to unveil a new strategy on Monday aimed at promoting weight loss that will reportedly include doctors prescribing people healthy activities such as cycling.

Ministers have been told two-thirds of UK adults are overweight.

Elsewhere in Europe, Russia reported only 77 COVID-19 deaths on Sunday, which was down considerably on the 146 deaths it recorded a day earlier. The nation now has a total of 13,269 COVID-19 deaths, and more than 600,000 people who have had the disease and recovered.

In Italy, the governor of Lombardy province, which was one of the nation's hardest-hit regions, is reportedly the subject of an investigation by law enforcement agencies who suspect him of impropriety in connection with contracts for personal protective equipment received by a company connected to his brother-in-law.