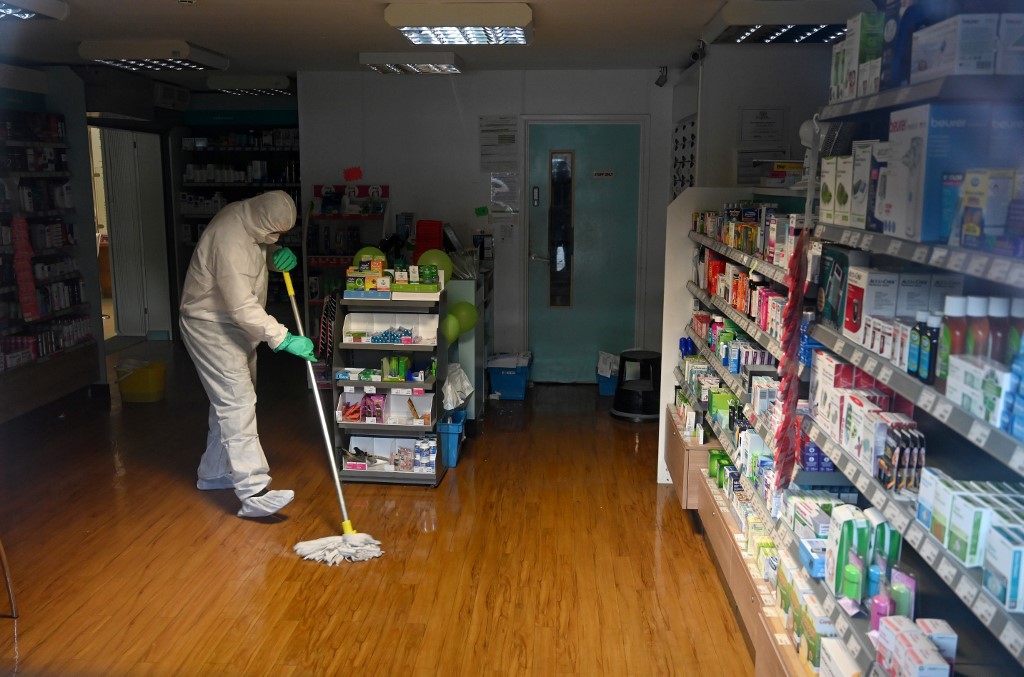 A worker in protective clothing, including face mask and gloves, cleans the floor of the pharmacy attached to the The County Oak Medical Centre in Brighton, southern England. (Photo: AFP)

A British businessman who became known as a "super-spreader" of the novel coronavirus said Tuesday he had fully recovered but remained in isolation in a central London hospital.

Steve Walsh issued a statement from Guy's and St Thomas' Hospital after catching the virus on a business trip in Singapore.

He is believed to have infected at least 11 other Britons -- five in a ski chalet in the French Alps and another five who have since returned to his home city of Brighton on England's southeast coast.

Another person was diagnosed while on vacation in Spain.

Walsh said he contacted Britain's state-run national health service as soon as he realised he might be sick.

"As soon as I knew I had been exposed to a confirmed case of coronavirus, I contacted my GP, NHS 111 and Public Health England," the 53-year-old said.

"I was advised to attend an isolated room at hospital, despite showing no symptoms, and subsequently self-isolated at home as instructed," he added.

"When the diagnosis was confirmed I was sent to an isolation unit in hospital, where I remain, and, as a precaution, my family was also asked to isolate themselves."

Walsh identified himself as a boy scout leader who works for a British natural gas analytics company called Servomex, according to the Daily Mail newspaper.

He was attending a business conference at the Grant Hyatt hotel in Singapore and is believed to have contacted the SARS-like virus strain there.

Britain has so far recorded eight cases inside the country.

The UK media's focus on the "super-spreader" from Brighton intensified after one of the medical centres in the coastal city temporarily closed because two of its staff also became infected.

A second branch of the same medical centre closed on Tuesday.

Walsh travelled to the French Alps before returning to London from Geneva on an EasyJet flight carrying more than 100 people.

The Daily Mail said on his return, Walsh went to his local pub in Brighton and attended a group yoga session at his church after returning from his trip.

He put himself in "self-isolation" after one of his colleagues abroad fell ill.

Health officials in Brighton are currently trying to trace patients of the two healthcare workers diagnosed with the virus strain.

Paul Cosford, a former director of Public Health England, said the risk to patients of the Brighton clinic remained small.

"There is not a general risk to any patient of the NHS in that area," he told BBC radio.

"We will be -- and have already been -- identifying the people who have been in particularly close contact."