UK wants post-Brexit trade with Africa to grow amid challenges 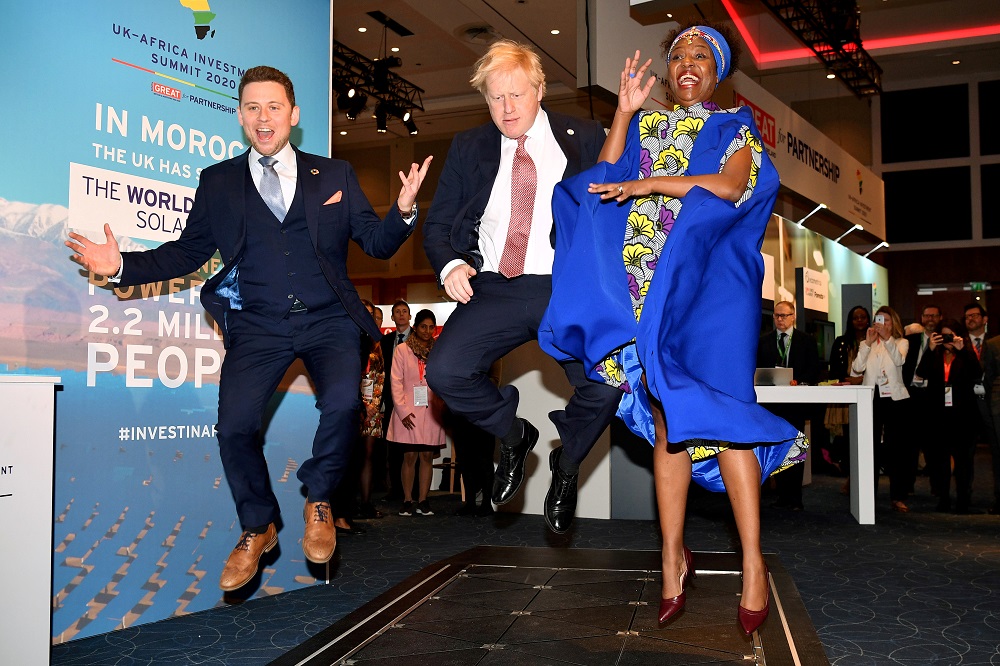 British Prime Minister Boris Johnson (middle) gets animated at a stand run by Pavegen, a company that converts footsteps into energy, during the UK-Africa Investment Summit in London on Monday. (Photo: Agencies)

With the United Kingdom's tenure as a member of the European Union coming to an end this month and the country in need of new trading partners, Britain's prime minister called this week for deeper ties with Africa.

Boris Johnson made the pitch in London on Monday, during the UK-Africa Investment Summit, as the clock ticked down to the UK's Jan 31 departure from the world's largest trading bloc.

Johnson said he wants the UK to be Africa's "investment partner of choice".

He also announced that the UK will no longer invest in overseas coal mining or coal-fired power plants because, he says, it would be wrong to cut carbon emissions at home while contributing to them abroad.

Reuters reported that the UK instead plans to help nations use oil and gas in clean ways, and encourage more solar, wind, and hydro power production.

Meanwhile, German broadcaster Deutsche Welle said the UK likely will not be able to ramp up its presence on the continent in a way that will match the economic presence of major players such as Russia and China.

And the UK's department for international trade says imports and exports involving the UK and African nations in the year ending in the second quarter of 2019 totaled $46 billion, a number that was dwarfed by China's $208 billion.

But with the continent seeing significant economic growth, it is clear that there is plenty of potential for all.

The United Nations predicts GDP growth on the continent will be 3.2 percent in 2020 and 3.5 percent in 2021, and that 25 African nations will have growth in excess of 5 percent. All other regions of the world have experienced slowing or stalled growth in recent years.

Separately, the UK's international development secretary, Alok Sharma, said in a statement ahead of the conference that Africa's economic potential "is huge" and noted that the continent has eight of the world's 15 fastest-growing economies and a population that will double, to more than 2 billion by 2050.

"We have much to offer African nations," Sharma said. "UK aid is tackling climate change and supporting women entrepreneurs, our tech and digital expertise is helping Africa grow new industries, and the City of London is channeling billions of private investment into Africa, boosting jobs and growth."

Johnson told them Brexit offers the UK a chance to have a "new start" in its trading relationship with other nations. And it was a message that echoed one carried by former UK prime minister Theresa May when she visited Africa in 2018.