WORLD UK warns Taliban to live up to its promises

UK warns Taliban to live up to its promises

Britain has helped more than 2,000 Afghans to flee the country in recent days, Prime Minister Boris Johnson said on Wednesday, as he warned the Taliban must be judged "on actions, not words". 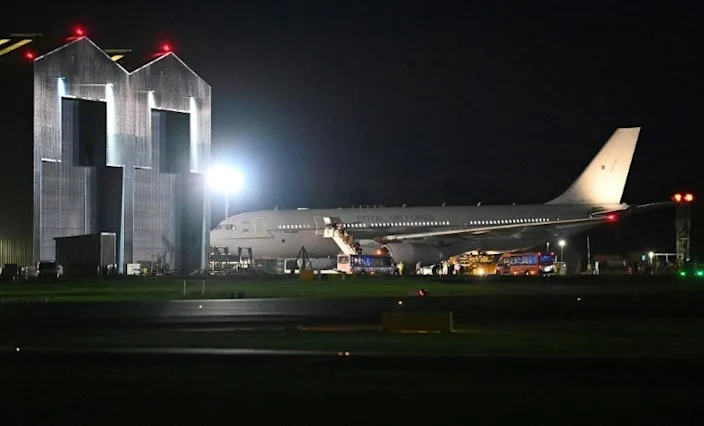 Flights have begun returning to an RAF base in Oxfordshire, south central England, as part of the resettlement and repatriation scheme. (Photo: AFP)

Addressing MPs called back to parliament from their summer holidays for an emergency debate, Johnson also defended his government's handling of the crisis, insisting Britain could not have stayed in Afghanistan without US support.

He said Britain had so far secured the safe return of 306 British nationals and 2,052 Afghan nationals as part of its resettlement programme, while 2,000 more Afghan applications were complete and "many more" were being processed.

"UK officials are working round the clock to keep the exit door open in the most difficult circumstances and actively seeking those we believe are eligible but as yet unregistered," Johnson told a packed House of Commons.

Britain announced late Tuesday a resettlement scheme for Afghans fleeing the Taliban after their return to power, offering an initial 5,000 places in the first year, rising to up to 20,000 in the long term.

The government has said priority will be given to those most at risk, including Afghan women, children and others forced to flee or facing threats and persecution from the hardliners, offering them a chance to remain in Britain indefinitely.

The scheme is modelled on that which resettled 20,000 refugees from the Syria conflict from 2014 to this year.

Some 900 British troops have been rapidly sent back to Kabul to help the repatriation and evacuation efforts.

However, Johnson faced critical questioning from a range of MPs, including many from his own ruling Conservative party, over the chaotic evacuations from Kabul and unfolding situation in Afghanistan.

He said that after conversations with other Western leaders including US President Joe Biden, the allies had "agreed that it would be a mistake for any country to recognise any new regime in Kabul prematurely or bilaterally".

"Instead, those countries that care about Afghanistan's future should work towards common conditions about the conduct of the new regime before deciding, together, whether to recognise it and on what terms," he said.

"We will judge this regime based on the choices it makes and by its actions rather than by its words, on its attitudes to terrorism, to crime and narcotics, as well as humanitarian access and the rights of girls to receive an education".

The Taliban on Tuesday offered a pledge of reconciliation, vowing no revenge against opponents and to respect women's rights, prompting scepticism given their widespread rights abuses before they were ousted from power in late 2001.

Outside parliament, protesters called for Britain to do more to help ordinary Afghans at risk of persecution by the Taliban, including military interpreters.

Campaigners and veterans who served in the conflict have criticised Britain's efforts to resettle interpreters, who fear reprisals because of their work for Western forces.

One of them, Dawran Jan Doranai, 34, resettled in Britain five years ago. He told AFP: "The situation is very bad and there is a serious threat for our families, for our colleagues.

"We are here to say that those left behind should be resettled in the UK and other countries."

Doranai said Britain's pledge to resettle up to 20,000 Afghans in the coming years was a "very good decision" but called for the scheme to include more.

Stan Laight, 31, from the left-wing Stop The War Coalition of campaign groups, added: "We should be taking anybody who is going to be a target for the Taliban."