A Cyprus court on Tuesday handed a four-month suspended sentence to a 19-year-old British woman who was found guilty of public mischief after authorities said she made up claims that she was raped by up to a dozen Israelis. 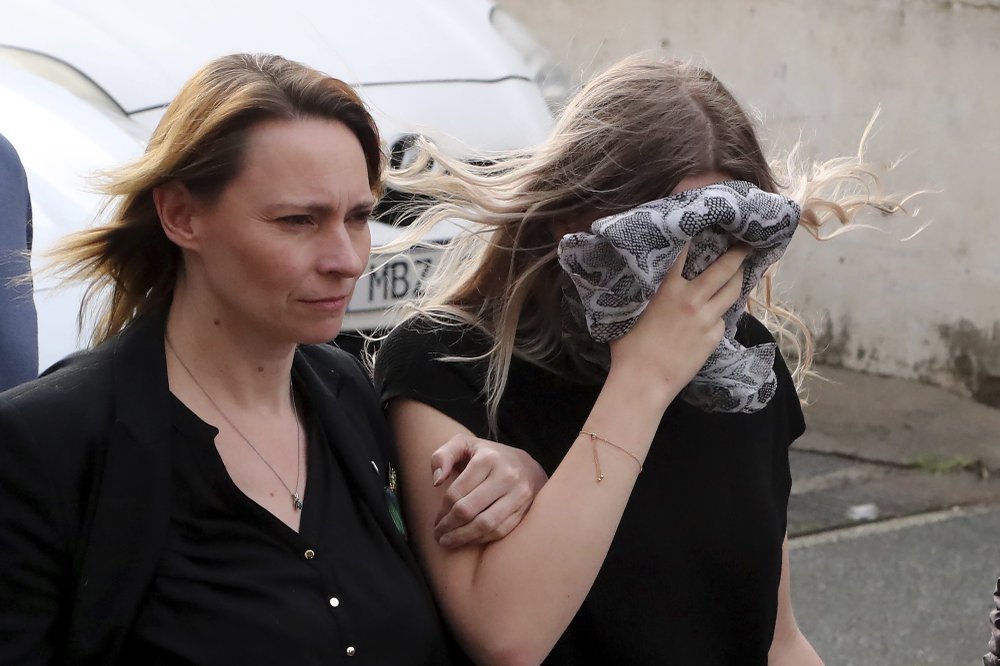 A 19 year-old British woman, right, that was found guilty of making up claims she was raped by up to 12 Israelis, arrives at Famagusta District Court with her mother for sentencing on Tuesday, Jan. 7, 2020. (Photo by AP)

The woman continues to insist that she was raped, and that she was coerced into withdrawing her statement. Her lawyers say she will appeal.

Judge Michalis Papathanasiou said although the public mischief charge was a serious offense, he decided to give the woman a “second chance” because she admitted through her lawyers during mitigation that she made a mistake in making the false rape claim.

He also cited other reasons, including her young age, immaturity, clean criminal record, personal circumstances, psychological condition and the fact that she had already spent a month in detention during the six months that legal proceedings including her trial lasted.

The judge said he also took into account that the huge publicity that her case has received in U.K. and Israeli media had weighed against the woman, who had to put her academic career on hold as she was due to start university in September.

Papathanasiou also fined the woman 140 euros ($156) and told her defense lawyers that the sentence could be activated if she commits another serious offense within three years.

The woman’s mother told reporters that she was “very relieved to be going home” after months of legal proceedings. Despite the suspended sentence, she said defense lawyers would try to overturn the conviction so that it’s expunged from her permanent record.

British lawyer Lewis Power, who’s part of the woman’s defense team, said an appeal would be filed with Cyprus’ Supreme Court and possibly with the European Court of Human Rights for “elements of this case which did not result in a fair trial.”

“(The woman) intends to have a positive outlook to move on from this process, not to let this process ruin her life,” Power told The Associated Press. “She’s delighted today, not just for herself, but for the impact that this case has had on all those women that are the subject of sexual assaults around the world.

She said she was “inspired and motivated” by the public support her daughter received from the U.K., Israel and Cyprus.

The case drew widespread interest in the U.K. and Israel after initial reports that the woman was the victim of a gang rape evolved into her being charged with making up claims of rape. The guilty verdict also triggered strong reaction from activist groups.

The woman insisted that she was raped in a hotel room at a coastal resort town on July 17 and that she was forced to sign the retraction 10 days later while under police questioning. All of the Israelis, aged 15-20, were then released and allowed to return home.

Reading his verdict last week, Papathanasiou said the defendant didn’t tell the truth and tried to deceive the court with “evasive” statements in her testimony.

The judge said the woman had admitted to investigators that she made up the claims because she was “ashamed” after finding out that some of the Israelis had videoed her having consensual sex with her Israeli boyfriend on their mobile phones. He had also said her admission was “the only time the defendant told the truth.”

While the judge was reading his sentence, a noisy group of demonstrators who showed up to support the woman chanted slogans outside the court house including, “Cyprus justice, shame on you” and “Stop blaming the victim.” Many cheered when they heard that the judge handed down a suspended sentence.

Anna Kleiman, of the Israeli activist group LOTEM, called the woman’s conviction “disgraceful” because it leaves her with a criminal record and makes it difficult for her to “pursue her dreams.”

“This is shameful that she was even suspected for the beginning and it’s unbelievable. We are furious,” Kleiman told the AP.

Nir Yaslovitzh, who represented some of the Israelis in the case, had called for a harsh sentence, but said it sufficed that the court convicted the woman.

“We respect the court’s decision. What was important to us was that the woman would be convicted and the version told by the clients I represented would be accepted,” he said.

Power said it remains to be seen if the “triumphalism” that some of the Israelis exhibited on their return to Israel after their release from Cyprus police custody were the actions “of people who were innocent of a crime.”