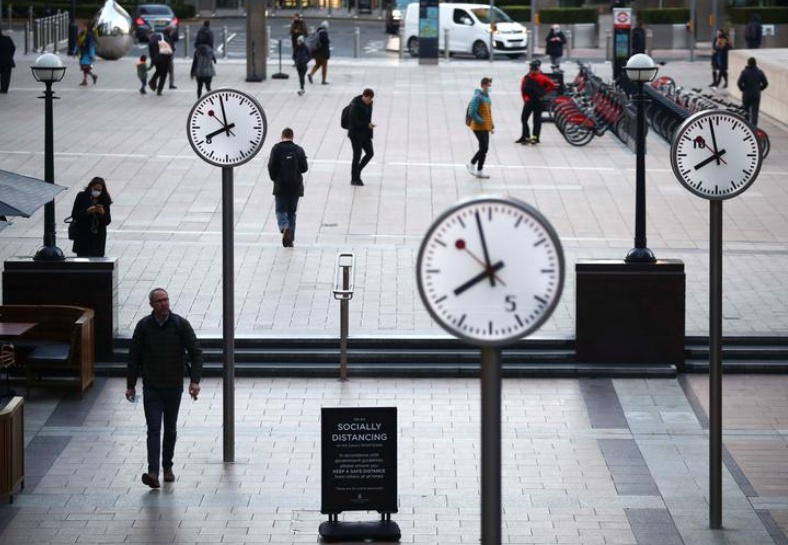 FILE PHOTO: People walk during the morning rush hour in the Canary Wharf amid the outbreak of the coronavirus disease (COVID-19) in London Britain, Oct 15, 2020. (Photo: Agencies)

Research by the Confederation of British Industry, or CBI, shows nine in ten employees in the United Kingdom will need new skills by 2030 at a cost of 13 billion pounds ($16.88 billion) a year.

The business lobby group believes the UK must face up to a choice between investment in its people or continual rates of high unemployment.

The report,based on analysis by McKinsey and Company and entitled Learning for life: funding world class adult education, said participation in training by those in lower-skilled jobs that are most at risk of automation is 40 percent lower than that for higher-skilled workers.

It said many individuals at risk of automation do not think that their roles will be impacted by technology, and that smaller enterprises face barriers that prevent many of them from increasing investment in training.

The analysis pointed out that workplace training has "flatlined at best in the last decade and needs to increase".

The report showed that to cope with digitization and automation, 21 million people will need basic digital skills. Critical thinking, leadership, and interpersonal relations are other areas where British workers will need to receive education, according to the CBI.

But Carolyn Fairbairn, CBI director-general, said the research shows more needs to be done and that the pandemic had "accelerated the need to act now".

She said: "The right skills strategy can help every worker to progress their careers, drive up living standards and level up the country. We are at a fork in the road that requires urgent and decisive action.

"The recently announced Lifetime Skills Guarantee is an important step in the right direction, but it is only a start."

The CBI has set out a package of measures, that it argues the government needs to adopt as a first step towards increasing investment in training by businesses, government, and individuals.

It suggested help should be provided to small businesses to overcome barriers to training investment, and that people must be encouraged to "invest more in their own learning".

The government has said it will soon outline its plans to build "a high-quality further education system that will provide the skills that individuals, employers and the economy need to grow and thrive".