WORLD Ukraine and Russia struggle to progress despite landmark meeting

Ukraine and Russia struggle to progress despite landmark meeting

Ukraine and Russia have agreed to a "full and comprehensive" ceasefire in eastern Ukraine by the end of the year. But the landmark meeting between Russian President Vladimir Putin and Ukrainan President Volodymyr Zelenskiy fell far short of a breakthrough.

Besides the ceasefire, the two sides agreed to another prisoner swap; to the withdrawal of troops from three additional locations; and to remove mines from the conflict zone.

The agreement is seen as a first step towards a framework for ending a near 6-year war in eastern Ukraine, but leaders acknowledged more work is needed.

"I say very openly we have a lot of work to do, but my feeling from this meeting here today is that there is goodwill to resolve difficult questions," said German Chancellor Angela Merkel, who along with France's Emmanuel Macron brokered the talks. "And this goodwill is always needed if you want to solve political problems."

Significant political problems remain. The summit effectively agreed to enforce the 2015 Minsk peace deal, which has repeatedly been undermined. Ukraine and Russia failed to tackle crucial issues like when local elections will take place in the Donbass region or when Ukraine will regain control of its borders. 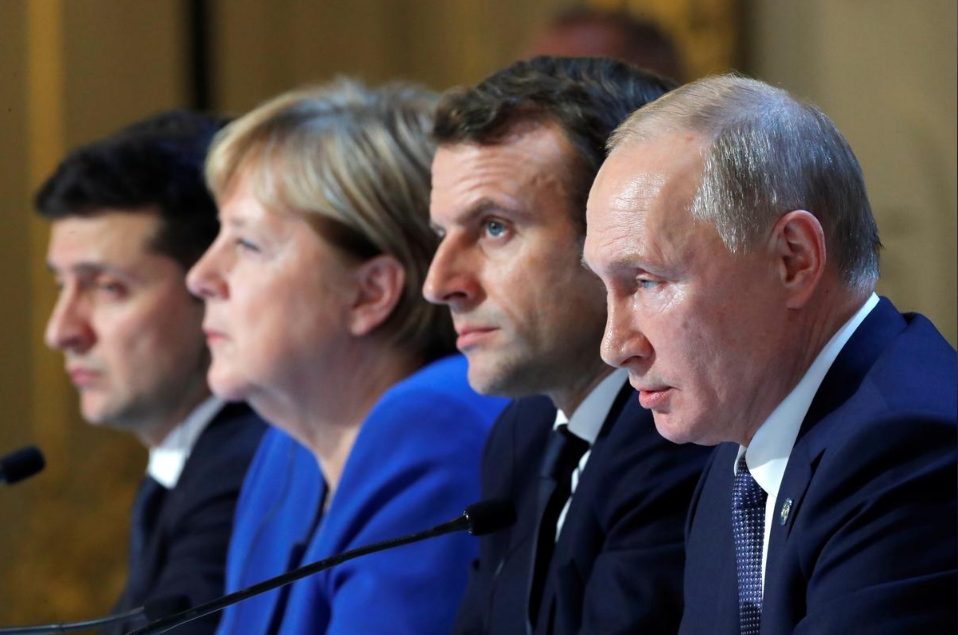 "I would like to outline a number of principles which I will never violate as a president of Ukraine and with which Ukrainian people will never agree," said Zelenskiy. "First, there is no chance for federalization. Ukraine is a unitary state."

"Many questions were tackled and my counterparts have said it is a very good result for a first meeting. But I will be honest – it is very little, I wanted to resolve a larger number of problems," Zelenskiy said after the talks in Paris.

The biggest stumbling block remains over the sequence of events. Zelensky wants elections to be held only after Ukraine has regained control of its territory. Putin wants the exact opposite, saying achieving a ceasefire needs to be synchronised with the implementation of political reforms in Ukraine, envisaged in the Minsk agreements.

"In the first place, this means introducing changes to the country's constitution, which give Donbass - the Donetsk and Luhansk regions - a permanent special status," Putin said. "Agreement on the special status of certain areas of Donbass of course needs to be extended. And eventually this norm must become permanent."

This is a red line for many Ukrainians, some of whom fear Zelensky, an actor-turned-president, will concede too much to Russia.

Macron said that there remained clear differences between Ukraine and Russia on the calendar for elections in eastern Ukraine, but indicated they hoped to reach a compromise within four months.

"We know there are disagreements on the calendar and phasing and we had a long discussion on it, but we said let's give ourselves four months to articulate the security and political conditions for these local elections," Macron told a news conference after the summit.

"We saw the differences today. We didn't find the miracle solution, but we have advanced on it."

More than 13,000 people have been killed in the Ukraine conflict, while nearly 4 million civilians living in the region have been impacted.

Officials said they will meet again in four months to push forward on unsolved issues.