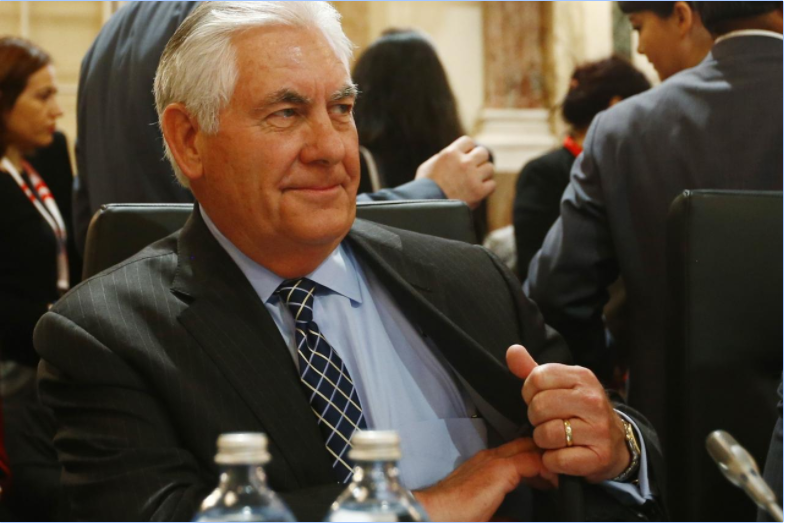 US Secretary of State Rex Tillerson prepares for the beginning of a meeting of OSCE Foreign Ministers in Vienna, Austria, December 7, 2017. Photo: Reuters/Leonhard Foeger.

The United States would “badly” like to lift sanctions against Russia but will not do so until Moscow has pulled its forces out of eastern Ukraine and Crimea, Secretary of State Rex Tillerson said on Thursday, calling that the main obstacle to normal ties.

Tillerson is on a visit to Europe during which he has reassured allies with tougher rhetoric against Moscow than that of US President Donald Trump, who has sought better relations with Russian President Vladimir Putin.

Speaking at a meeting of the Organization for Security and Cooperation in Europe (OSCE), also attended by his Russian counterpart, Tillerson said Moscow was to blame for increased violence in eastern Ukraine and that had to stop.

“We’ve made this clear to Russia from the very beginning, that we must address Ukraine,” Tillerson told a news conference with his Austrian counterpart Sebastian Kurz. “It stands as the single most difficult obstacle to us renormalizing the relationship with Russia, which we badly would like to do.”

On Wednesday, Tillerson met NATO foreign ministers and criticized Russia for the mix of state-sponsored computer hacks and Internet disinformation campaigns that NATO allies’ intelligence agencies say is targeted at the West.

The conflict between Ukrainian forces and Russian-backed separatists in eastern Ukraine has claimed more than 10,000 lives since it erupted in 2014. Russia denies accusations that it fomented the conflict and provided arms and fighters.

Russian Foreign Minister Sergei Lavrov told the OSCE conference that “all the responsibility is with Ukraine” as far as violence in the east was concerned.

In his speech to the gathering, Tillerson went even further in spelling out Russia’s involvement in the conflict and the consequences it faced than he had the day before in Brussels.

“We should be clear about the source of this violence,” Tillerson said, referring to increasing ceasefire violations recorded by OSCE monitors in eastern Ukraine.

“Russia is arming, leading, training and fighting alongside anti-government forces. We call on Russia and its proxies to end its harassment, intimidation and its attacks on the OSCE Special Monitoring Mission.”

While both sides have called for a U.N. peacekeeping force in eastern Ukraine, they disagree on the terms of its deployment, and there was little sign of concrete progress at Thursday’s meeting.

“We will continue to work with Russia to see if we could not agree a peacekeeping force that could enter Ukraine (and) reduce the violence,” Tillerson told the news conference.