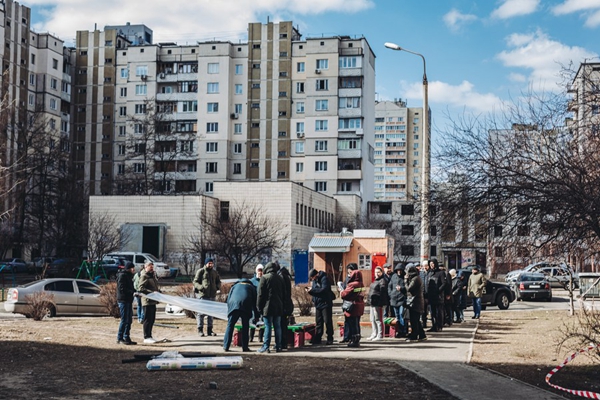 People line up to get plastic covers to mend broken windows on March 17, 2022 in Kiev, Ukraine. [Photo：Xinhua]

Ukraine and the European Union have agreed on the final text of a deal on road transport liberalization, the Ukrainian Infrastructure Ministry said in a statement on Tuesday.

The agreement, which is set to be signed by the end of this month, will significantly improve and speed up logistics between Ukraine and the EU, the ministry said on Facebook.

In particular, the deal stipulates that the EU will cancel the obligation for Ukrainian haulers to obtain special permits for transporting goods in the EU.

"This is critically important today, when, in the conditions of the blockade of seaports, the Ukrainian economy is completely dependent on stable logistics on the western borders," said Oleksandr Kubrakov, the Ukrainian infrastructure minister.

After the start of the Russia-Ukraine conflict in February, 12 EU countries have temporarily allowed permit-free passage for Ukrainian freight automobile transport.