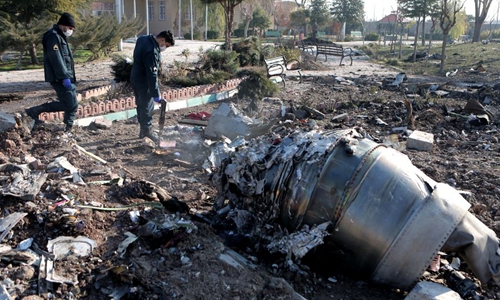 Ukraine insisted on Monday that Iran hand over the black box flight recorders of a passenger plane mistakenly shot down by Iranian forces during a spike in tensions with Washington.

Iran's Minister of Roads and Urban Development Mohammad Eslami was in Kiev on Monday and set to hold talks with Ukrainian President Volodymyr Zelensky, the presidency said. He had come to "officially apologize" after Iran admitted that it mistakenly shot down a Ukrainian passenger plane, Foreign Minister Vadym Prystaiko told journalists.

"We hope that we would be able... to discuss practical issues including the return of the black boxes," Prystaiko said.

"On the part of Iran, this will be proof of the readiness for open dialogue."

The Kiev-bound Ukraine International Airlines Boeing 737 crashed shortly after taking off from Tehran on January 8, killing all 176 people on board, mostly Iranian and Canadian citizens.

The Boeing crashed shortly after Iran launched missiles at US forces in Iraq in response to the killing of top Iranian general Qasem Soleimani in a US drone strike in Baghdad on January 3. Tehran admitted several days later it had accidentally shot down the plane.

On Friday, Prystaiko said Tehran was "ready" to hand over the flight recorders to Kiev but a senior Iranian official later announced that his country intended to keep the black boxes "for now."