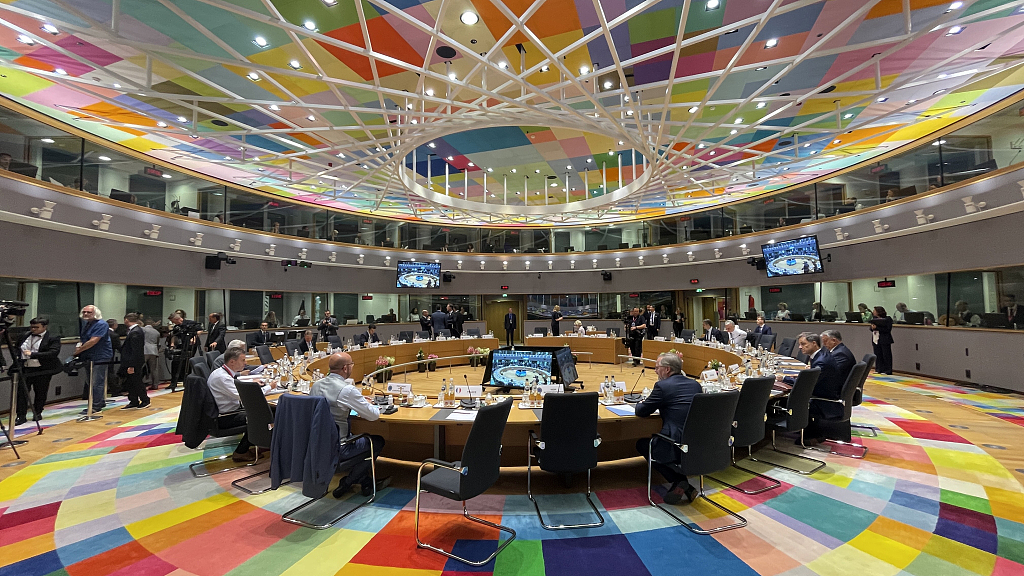 Leaders from the European Union's 27 member states unanimously endorsed candidate status of the bloc's membership for Ukraine and Moldova on Thursday evening, a move hailed by EU leaders as "historic" but viewed by experts as symbolic in an extremely lengthy process.

EU leaders were divided earlier over such a fast decision that will be unfair to other applicant nations, but their views have changed notably in the past week since the European Commission formally published its opinion endorsing the status.

The decision was made on the first day of a two-day EU summit in Brussels. It also came a week after a joint trip to Kyiv by French President Emmanuel Macron, German Chancellor Olaf Scholz and Italian Prime Minister Mario Draghi, voicing their support for the candidate status.

Moldova's President Maia Sandu called the announcement "an unequivocal signal of support for our citizens and Moldova's European future".

Macron called the move "historic" and "starting a new platform for Ukraine, Moldova and Europe".

While EU leaders finally agreed unanimously on Ukraine and Moldova, they failed to break the deadlock over the membership bids by Albania and North Macedonia, which were granted candidate status in 2014 and 2005 respectively.

Candidate status is seen by many as a symbolic move, showing that a designated country could begin a prolonged process to formal accession. Turkey received its candidate status as early as December 1999 and still sees no light in the immediate future.

Ding Chun, director of the Center for European Studies at Fudan University in Shanghai, said the decision was made against the backdrop of the Russia-Ukraine conflict.

"But it should be noted that the path from candidate status to formal membership is very long," he said.

"The admission of candidacy is indeed historically quick, but we have to remember that the accession process is much longer, and there are difficult parts ahead," echoed Lai Suetyi, an associate professor in the Center for European Studies at the Guangdong University of Foreign Studies.