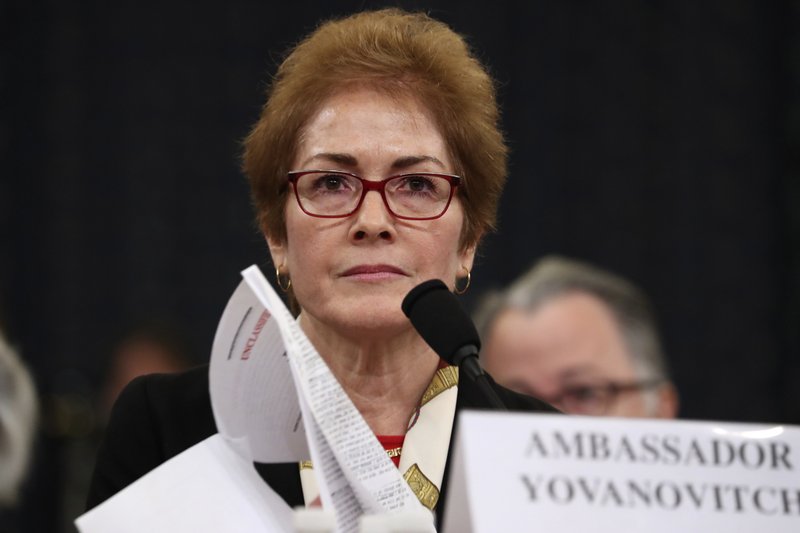 Ukrainian police said Thursday they have opened an investigation into the possibility that the US ambassador came under illegal surveillance by an unknown party before she was recalled from her post in May.

The announcement came two days after Democratic lawmakers in the United States released a trove of documents that showed Lev Parnas, an associate of President Donald Trump’s personal lawyer, communicating about the removal of Marie Yovanovitch as the US ambassador to Ukraine.

The Ukrainian Interior Ministry said in a statement that Ukrainian police “are not interfering in the internal political affairs of the United States” by conducting the probe.

“The published messages contain facts of possible violations of Ukrainian law and of the Vienna Convention on diplomatic relations, which protect the rights of diplomats on the territory of another state,” the ministry’s statement continued.

The Interior Ministry also said it has requested the FBI provide relevant materials. Interior Minister Arsen Avakov “suggested that the US side take part in the investigation,” the statement said.

There was no immediate comment from the State Department — which one former diplomat assessed as extraordinary.

“This has to be a first in American history,” Nick Burns, who rose to become the third-ranking official at the State Department before his retirement, wrote on Twitter. “A foreign government rushing to the defense of a senior US career ambassador to defend her from people deputized by the President of the United States. And the Secretary of State refuses to say one word in her defense.”

Democrats in the House of Representatives released the files this week as they prepared to send articles of impeachment to the Senate for Trump’s trial.

A House committee chairman said Wednesday that the newly disclosed materials included text messages between Parnas and a Republican candidate for Congress that raised questions about the possible surveillance of Yovanovitch before she was ousted by the Trump administration.

“Our goal is to investigate whether there actually was a violation of Ukrainian and international law,” the Ukrainian Interior Ministry said. “Or whether it is just bravado and fake information in the informal conversation between two US citizens.”

In another move touching on the Trump impeachment, Ukraine said it was opening an investigation into reports that Russian hackers gained access to computers of the Ukrainian gas company Burisma.

Hunter Biden, the son of Trump opponent and former US vice president Joe Biden, was on the board of that company. The impeachment inquiry began with allegations that Trump had tried to pressure Ukrainian President Volodymyr Zelenskiy into investigating Burisma by withholding promised military aid.

The FBI also has been invited to take part in the Burisma hacking investigation, the Ukrainian Interior Ministry said.