WORLD Ukraine’s leader: We can’t be ordered to investigate Biden

Ukraine’s leader: We can’t be ordered to investigate Biden 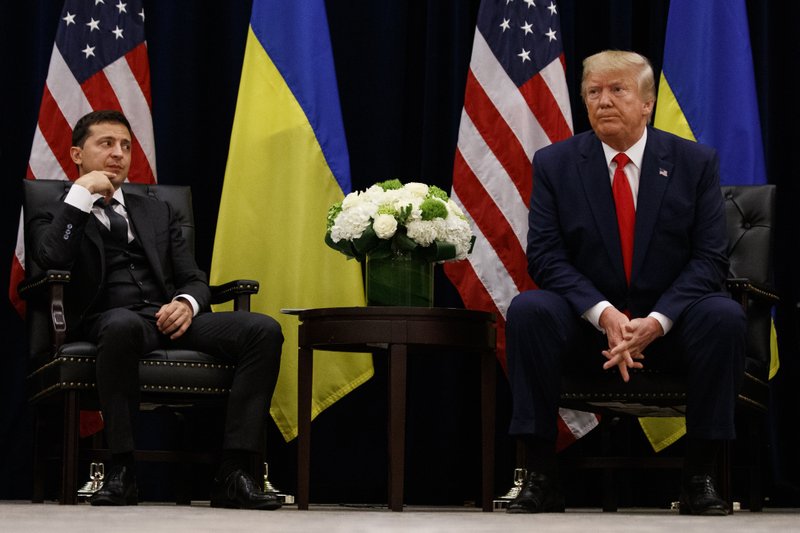 Ukraine’s president says his country can’t be pressured into opening an investigation into Democratic presidential candidate Joe Biden or his son.

And both Ukraine and rival Russia are pushing back at the White House for releasing a transcript of a private phone call between US President Donald Trump and another world leader.

President Volodymyr Zelenskiy is trying to contain damage at home and abroad after the world learned last week that Trump pushed him to “look into” Biden and his son Hunter, who served on the board of a troubled Ukrainian gas company.

“We cannot be ordered to do anything. We are an independent country,” Zelenskiy told reporters Monday during a visit to a Ukrainian military base, when asked about Trump’s request.

The Ukrainian president reiterated his criticism of the White House decision to release a rough transcript of the July phone call in which Trump discussed the Bidens with Zelenskiy. The call sparked a Congressional impeachment inquiry now dominating the US political landscape.

Zelenskiy said Ukraine would probably not release its own transcript of the call, because “there are certain nuances and things that I think would be wrong to publish.”

The Kremlin — accused of meddling in the 2016 US election in Trump’s favor — appears to agree.

Russian President Vladimir Putin’s spokesman said Monday that transcripts of calls between him and Trump can only be published by mutual accord. Spokesman Dmitry Peskov said that “diplomatic practice doesn’t envisage such publications.”

The political furor over the Trump-Zelenskiy call has come as a severe test for Zelenskiy, a comedian who promised to uproot Ukraine’s endemic corruption and end fighting with Russia-backed separatists in Ukraine’s east. The transcript portrays Zelenskiy as flattering Trump and trying to stay in his good graces.

A top Ukrainian presidential adviser, Andriy Yermak, insisted that Ukraine wants to maintain good relations with both Democrats and Republicans, and doesn’t want to get tangled up in US political tensions.

“What is happening there is internal US political doings, and we will not take part in this in any way,” he said on Ukraine’s 1+1 television Sunday night.

He noted that Ukraine wants to retain good relations with both sides because it needs US support — no matter who is in charge of the White House or Congress.

“We see the US as our friend, our strategic partner,” he said.

Zelenskiy sought to play down the situation involving Biden and his son’s activities in Ukraine, calling it just one of many similar cases he discusses with foreign leaders.

The head of Ukraine’s Specialized Anti-Corruption Prosecutor’s Office said last week that Ukrainian authorities have not yet seen information that would signal possible wrongdoing by Biden or his son or a reason to question them.

Meanwhile, Zelenskiy sought Monday to show he is taking control of his domestic political problems by firing his national security chief, Oleksandr Danilyuk. The move came after infighting among camps in Ukraine’s power structures.