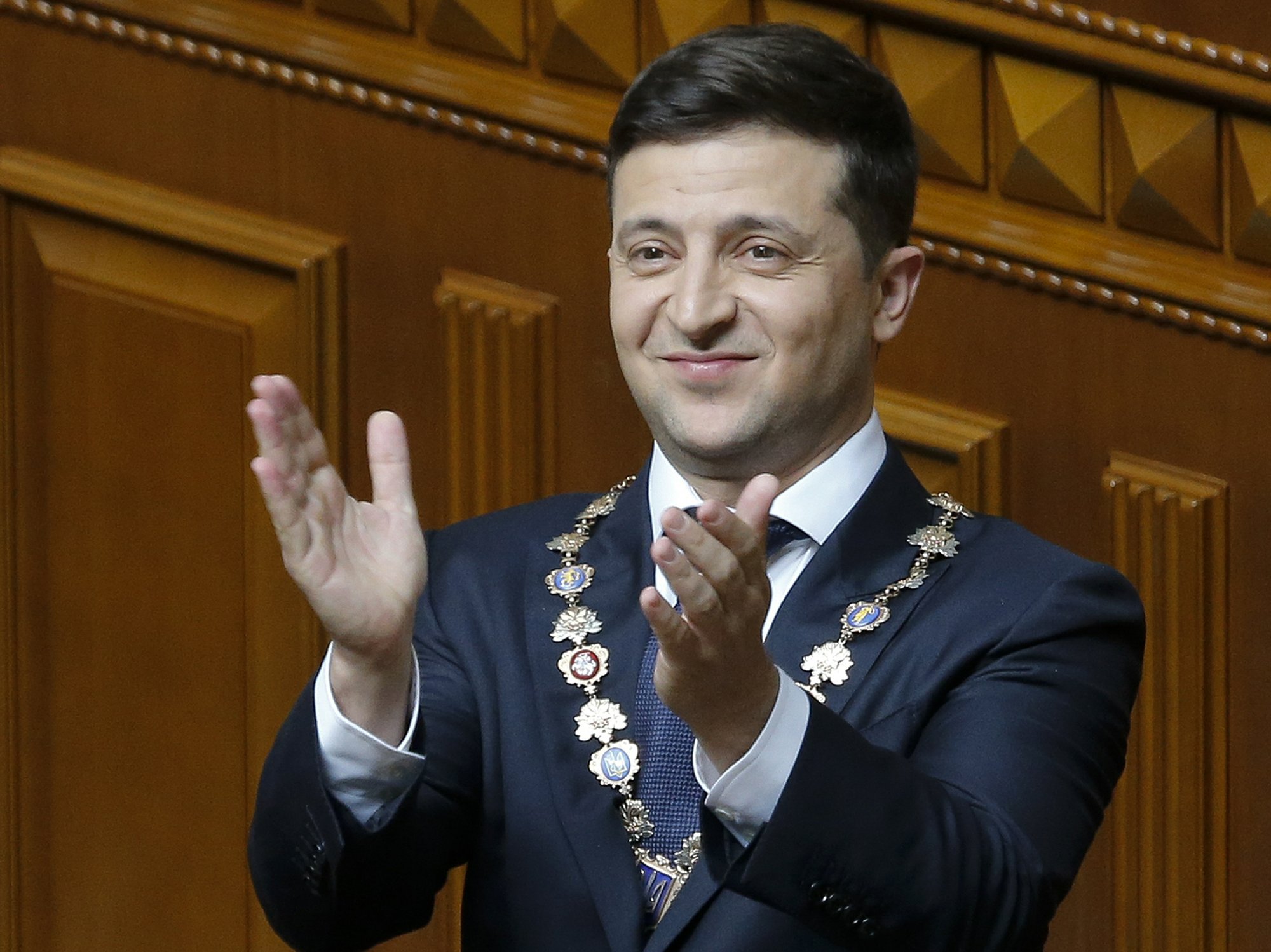 Ukrainian new President Volodymyr Zelenskiy gestures during his inauguration ceremony in Kiev, Ukraine, May 20, 2019. Television star Volodymyr Zelenskiy has been sworn in as Ukraine's next president after he beat the incumbent at the polls last month. The ceremony was held at Ukrainian parliament in Kiev on Monday morning. (Photo: AP)

Emboldened by his stunning victory last month, Ukrainian TV star Volodymyr Zelenskiy moved swiftly Monday to dissolve the country’s parliament, moments after he was sworn in as the country’s new president.

Zelenskiy, who won 73% of the vote last month, justified his contentious decision to dissolve the parliament, which is controlled by allies of the man he defeated, Petro Poroshenko, on the grounds it has become a hotbed of self-enrichment.

A presidential decree formally disbanding the parliament is expected later Monday. If all goes to plan, the snap election will be held within two months after the decree is signed.

Elections to the Supreme Rada were scheduled for Oct. 27, which raised the prospect of Zelenskiy struggling to enact his agenda in the face of a hostile parliament over his first few months in power.

Zelenskiy, who played the Ukrainian president on a popular TV show for years, is gambling that his popularity will see the next parliament dominated by supporters of his agenda to reform Ukraine and steer a new path with Russia.

“People are tired of experienced... politicians who for 28 years have been building a country of opportunities,” he said. “Opportunities for kickbacks, money laundering and corruption.”

Zelenskiy’s surprise move is certainly controversial and follows repeated attempts by the majority in the current parliament to stymie his campaign promise for a snap election.

Since last month’s election, Zelenskiy’s opponents in the Rada sought to put off the inauguration close to the May 27 deadline by which the parliament can be dissolved.

And in a dramatic move last week, the Rada announced the collapse of the ruling parliamentary coalition. According to parliamentary rules, the chamber cannot be dissolved for 30 days after the governing coalition has been disbanded.

Zelenskiy’s supporters argue that the Rada’s actions are legally void because the coalition had long ceased to exist and that the Constitution, unlike the Rada regulations, does not contain such a rule.

“The legally dubious decision to disband parliament will certainly be contested in court but Zelenskiy has shown that it is going to be him who will lay down the agenda and that he will dominate the political landscape,” he said.

He ditched the idea of a traditional motorcade to his inauguration, walking to the parliament Kiev through a park packed with people. Flanked by four bodyguards, the beaming president-elect gave high-fives to some spectators, even stopping to take a selfie with one of them.

At the end of his swearing-in ceremony Zelenskiy asked the Supreme Rada to adopt a bill against illegal enrichment and support his motions to fire the country’s defense minister, the head of the Ukrainian Security Service (SBU) and the Prosecutor General. All are allies of Poroshenko.

That’s when he dropped his bombshell about dissolving parliament. Zelenskiy told lawmakers they only have a few weeks to support his motions as that’s as long as the current parliament has.

Two of the three officials he has asked to leave, Defense Minister Stepan Poltorak and SBU chief Vasyl Grytsak, promptly handed in their resignations.

Zelenskiy also told the Rada that the main goal for the presidency is to bring peace to eastern Ukraine, where government troops have been fighting Russia-backed separatists for five years in a conflict that has left at least 13,000 dead.

“I’m ready to do everything so that our heroes don’t die there,” he said. “It wasn’t us who started that war. But we need to be the one to finish it.”

The new president wrapped up his speech at parliament by referring to his career as a comedian.

“Throughout all of my life, I tried to do everything to make Ukrainians laugh,” he said with a smile. “In the next five years I will do everything, Ukrainians, so that you don’t cry.”