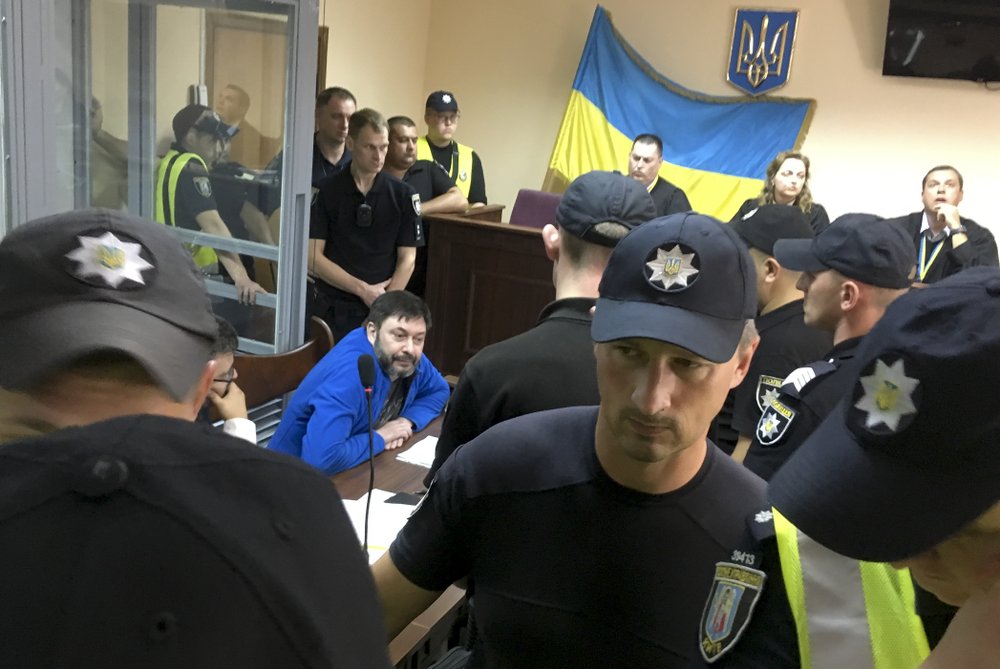 Ukraine’s president on Friday outlined the details of an impending prisoner swap with Russia, saying that Kiev is willing to release a jailed Russian journalist in exchange for a Ukrainian film director.

President Volodymyr Zelenskiy’s statement comes at the end of the week of shuttle diplomacy, with the Russian and Ukrainian human rights ombudswomen holding talks both in Moscow and in Kiev. The flurry of activity around imprisoned Russians and Ukrainians follows last week’s first telephone call between Zelenskiy and Russian President Vladimir Putin.

A major prisoner swap would give a major boost to Zelenskiy’s party in Sunday’s early parliamentary election.

The Ukrainian government has been fighting with Russia-backed separatists in the country’s east since 2014, after Russia annexed Ukraine’s Crimean Peninsula. Dozens of Ukrainians have been put on trial by Russian authorities and convicted in what have largely been perceived as politically-motivated cases.

In addition, dozens of Russian citizens and separatist supporters are in Ukrainian custody, facing charges of treason and inciting separatism.

Political novice and former comedian Zelenskiy, who was elected in April, has said the release of Ukrainians in Russian custody is one of the most urgent priorities of his presidency.

Zelenskiy said in televised comments Friday that Ukraine could release journalist Kirill Vyshinskiy, who has been in jail for a year on treason charges, if Russia releases film director Oleg Sentsov from a Russian prison colony. Sentsov is serving 20 years in a Russian prison for allegedly plotting acts of terrorism.

“We can give you Mr. Vyshinskiy if you want,” Zelenskiy told reporters, addressing the Kremlin. “And you give us Sentsov back.”

A court in Kiev, however, ruled later on Friday to keep Vyshinskiy in custody through September.

The journalist who used to head the Kiev bureau of the state-owned RIA Novosti news agency insisted on his innocence in court and said he must be released, not merely swapped for another prisoner.

“A journalist should not be in jail for their work,” he said in court. “I’ve heard that someone wants to swap me. But I’m not a thing that can be swapped.”

Sentsov is arguably the highest-profile Ukrainian imprisoned in Russia. A native of the Russia-annexed Crimea Peninsula, Sentsov was sentenced to 20 years in prison in 2015 for conspiracy to commit terrorism. His supporters call the prosecution of Sentsov, who staunchly opposed the annexation of Crimea, politically motivated.

Russia had been expected to release 24 Ukrainian sailors captured off Crimea last December but a Moscow court on Wednesday ruled to keep them behind bars pending trial.

Zelenskiy said Friday the seamen should be released without preconditions. Ukraine says they were abducted in international waters.