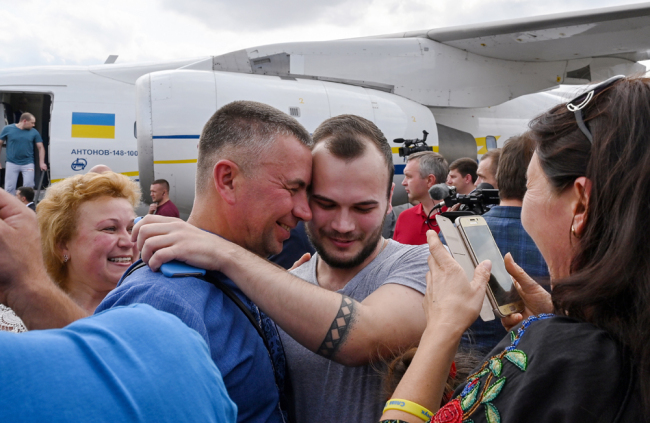 A former prisoner hugs relatives after he disembarked from a plane on September 7, 2019 at Boryspil international airport in Kiev after a long-awaited exchange of prisoners between Moscow and Kiev, a day after Russian President said for the first time the "large-scale" prisoner exchange with Ukraine was being finalized. (Photo: AFP)

Ukraine and Russia conducted an exchange of detainees on Saturday in a step towards easing tensions in east Ukraine's Donbass region and the thawing of bilateral ties.

Planes from the two countries brought the freed inmates to Moscow and Kiev respectively. In the 35-for-35 format, Ukraine received 24 sailors, film director Oleg Sentsov, journalist Roman Sushchenko and 9 others.

Ukrainian President Volodymyr Zelensky was present at the airport along with relatives of the Ukrainian citizens.

Upon his arrival in Moscow, Vyshinsky said he felt well and thanked Russian diplomats and the Organization for Security and Co-operation in Europe (OSCE) for their efforts to secure his release.

On May 15, 2018, the Ukrainian Security Service raided RIA Novosti Ukraine, accusing its staff of supporting the insurgents in Donbass and high treason, and detaining Vyshinsky, a Ukrainian native with Russian citizenship.

"We welcome the swap and are happy that Russian citizens came home," Kremlin spokesman Dmitry Peskov said on Saturday.

Since taking office in May, Zelensky has held two phone conversations with Russian President Vladimir Putin in August and July respectively, to discuss the situation in Donbass and an exchange of detainees.

"Unlike its predecessors, the new administration of Zelensky demonstrated a sound approach and willingness to compromise," the Russian Foreign Ministry said in a statement on Saturday.

The ministry said it considers the swap of detainees a positive signal to break the current impasse in Russia-Ukraine relations and to implement the Minsk agreements on Donbass settlement.

The ministry hopes that this step will create a positive background for substantive work within the frameworks of the Trilateral Contact Group consisting of Russia, Ukraine and the OSCE, and the Normandy Format of Russian, Ukrainian, German and French leaders, in a bid to further implement the Minsk Agreements to resolve the Ukraine conflict.

Since April 2014, an armed conflict between Ukrainian government troops and pro-independence insurgents has been underway in Donbass.

The Minsk agreements, reached in September 2014 and February 2015 respectively, are designed to peacefully end the conflict in Donbass, which envisage a ceasefire, a withdrawal of heavy weaponry from the demarcation line, a prisoner exchange and local elections, among other measures.