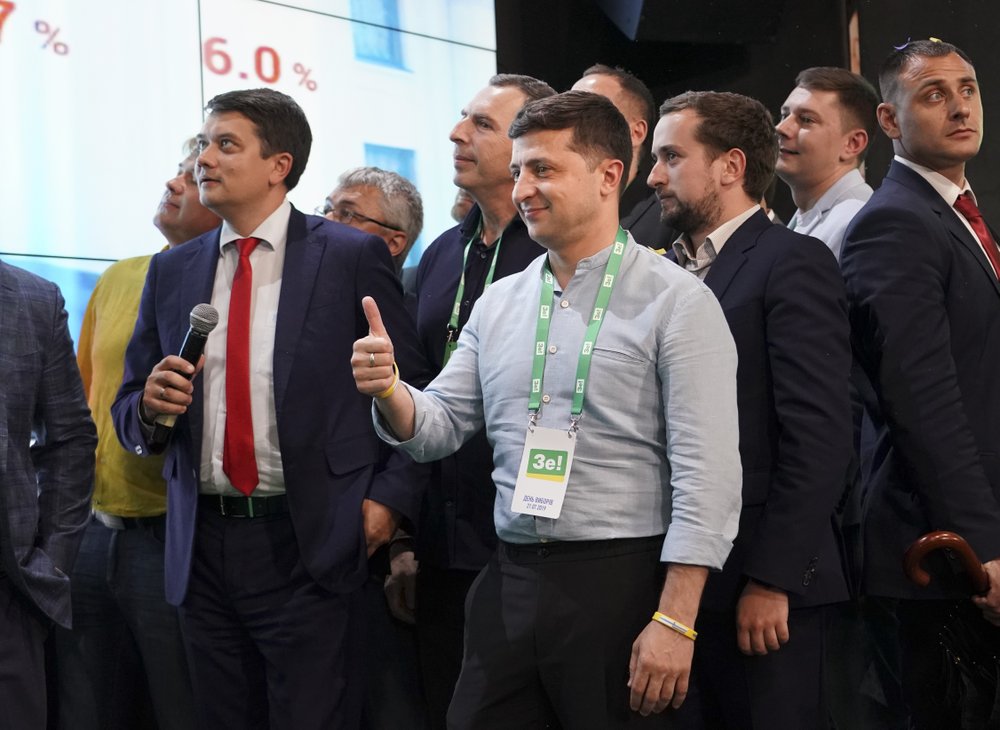 Ukrainian President Volodymyr Zelenskiy, center, reacts with his team as they look at the election results at his party's headquarters after a parliamentary election in Kiev, Ukraine, Sunday, July 21, 2019. (Photo: AP)

The latest data suggested that members of the president's Servant of the People party are leading in around 120 out of 199 constituencies as of 9:15 a.m. local time (0615 GMT).

The commanding lead will give Zelensky control of parliament as he has been seeking to form a new government following his landslide victory in April's presidential election.

Zelensky said that his party is ready to discuss a possible coalition with Svyatoslav Vakarchuk's Holos party, which is ranked fifth in the single-mandate voting according to national exit polls.

"Our proposal to Mr. Vakarchuk was voiced since the beginning of my presidential campaign ... We invite Mr. Vakarchuk to talk with pleasure," said Zelensky last Sunday during a briefing at his party's headquarters in Kiev.

Out of the 424 parliament seats, only 225 will be chosen by a nationwide party list and the remaining 199 are single-mandate seats.

The Servant of the People party is also winning the party-list voting, garnering over 42 percent of the votes, as the preliminary results showed.

Zelensky, the comedian-turned-president, stunned the political world in the recent election by pledging to root out corruption, ensure the equality of Ukrainian citizens before the law, and improve healthcare and education services.

The highly possible victory of his party in the snap election would give him a stronger mandate to implement reforms.