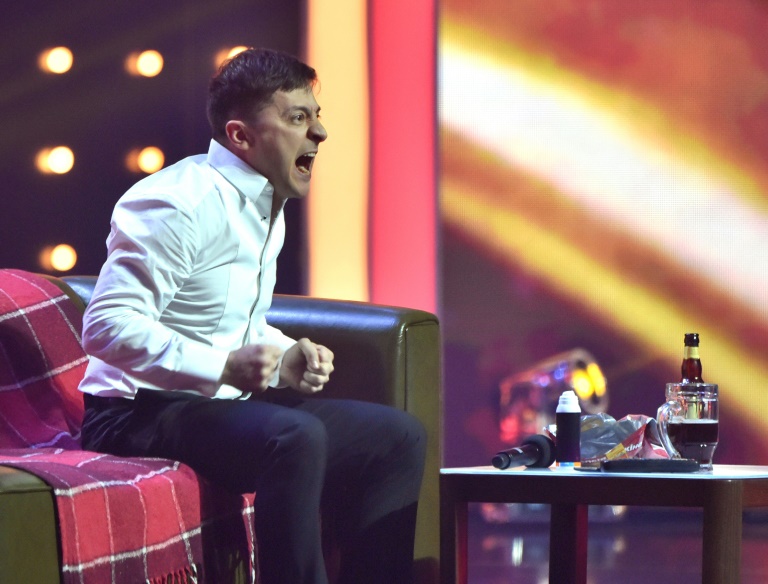 Ukrainian comic actor and presidential candidate Volodymyr Zelensky has no political experience beyond playing the head of state. (Photo: AFP)

The frontrunner in Ukraine's presidential election, Volodymyr Zelensky, has no political experience beyond playing the head of state in a TV show, but supporters see him as their best hope for change.

"In a storm, any port will do," says Andriy, a Ukrainian businessman who has come to watch comedian and candidate Zelensky perform in a sketch show in Kiev ahead of the crucial March 31 poll.

"We don't know what kind of politician he will be. We just hope that he will be a change for the better, a light at the end of the tunnel," adds the 42-year-old.

The election in corruption-riddled Ukraine, which is fighting a war against Russian-backed separatists in its east, was set to be a head-to-head between two political heavyweights.

But incumbent Petro Poroshenko and ex-prime minister Yulia Tymoshenko appear to have failed to inspire the electorate, who see them as having done little to improve living standards during their terms in office.

Instead 41-year-old Zelensky, best known for his entertainment production company Kvartal 95 and playing the lead in political comedy "Servant of the People", has shot to pole position.

His support is around 25 percent -- well ahead of his closest rivals.

Supporters see him as a breath of fresh air, but critics say his manifesto is vague and a country at war should not be taking a chance on a political novice.

"Zelensky's a new name, a new leader. He's never been in politics," Sergiy Dovgiy tells AFP ahead of the show at a packed Kiev concert hall this week.

The 52-year-old entrepreneur says he will "probably" vote for the performer.

Zelensky's lack of military experience does little to discourage his fans.

"We have already seen how others with a great deal of experience have messed things up," says spectator Andriy.

"He's not going to have to run through fields with a Kalashnikov in his hand -- he has to form a team of generals, economists and politicians, and direct them," Andriy adds.

Lilia Polishchuk, a 28-year-old who works in tourism, is less equivocal in her support.

"He's a self-made man, he does cool projects...he's very intelligent," she says.

"Young people who want change are going to vote for him," Polishchuk adds -- a claim that is backed up by opinion polls.

The lion's share of Zelensky's support -- around 38 percent -- comes from people aged 18 to 25, according to a recent survey by the non-governmental polling organisation Rating Group.

Aside from the youth vote, he is particularly popular in the south and east of the country, which are largely Russian-speaking.

But at the Kiev comedy show, where Zelensky is barred by law from campaigning he is nonetheless landing blows on his rival Poroshenko, not everyone is a fan of his leadership ambitions.

"We watch all his films and shows," says 28-year-old Daryna Netessa, who has come with her mother.

"But in politics, you need someone with experience and training."

"Ronald Reagan was an actor as well," says the entrepreneur, also mentioning the action star Arnold Schwarzenegger, who was governor of California between 2003 and 2011.

"He also went into politics with no experience and he managed the state very well," Yankovenko says.