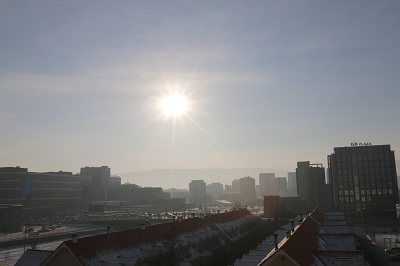 Ulan Bator (People's Daily) - Mongolian summers are all about blue skies, white clouds and green, green grass. But in winter, air pollution, driven by the heavy use of coal and cold air from Siberia, create quite a different kind of scenery.

PM2.5 and PM10 pollution comes via the over-use of coal, construction dust and car fuel issues, according to a report by the Ministry of Environment and Tourism of Mongolia.

Mongolia’s population is over 3 million, with nearly half of living in the capital Ulan Bator. In Ulan Bator, 56.7 percent of people live in shanty towns while 43.3 percent live in storied houses.

The basin topography of the capital city makes the air pollution hard to shift.

The country’s vehicle population is 876,000, 510,000 in the capital. Mongolia has no car industry and more than 80 percent are old or imported. It is a common sight to see black smoke spewing from exhaust pipes.

Mongolia’ attempts to deal with air pollution have so far proved far from satisfactory. An angry public gathered in Genghis Khan Square and demanded more effective measures to lower air pollution and protect their health.