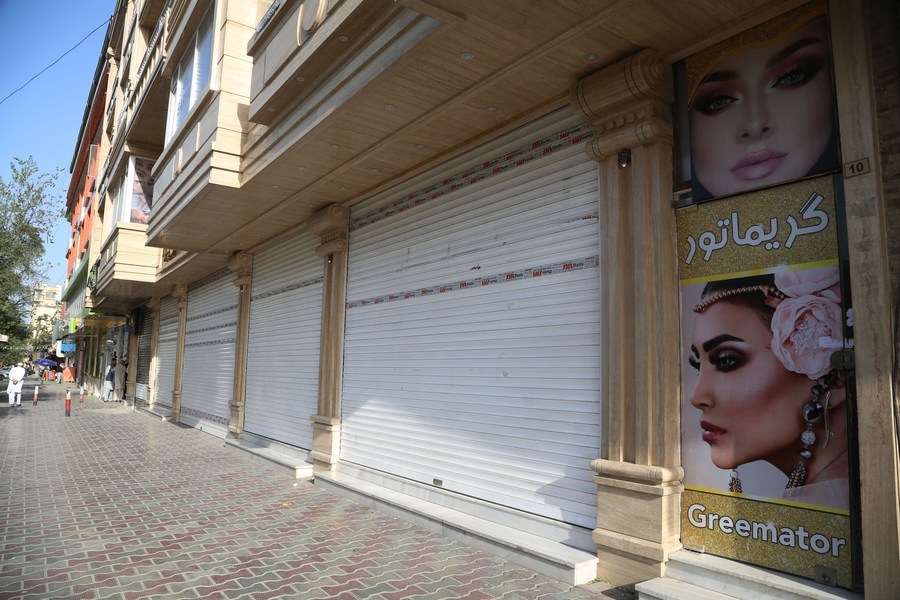 The heads of United Nations agencies in Afghanistan are calling on the international community to continue to provide financial aid to the war-torn country, where millions of people are suffering from food insecurity and also face challenges caused by the COVID-19 pandemic and an ongoing drought.

"There's an awful humanitarian crisis unfolding; the decision now to halt funding of any level to Afghanistan will have absolutely horrendous consequences," said Mary-Ellen McGroarty, the World Food Program (WFP) country director in Afghanistan, who joined the UN's daily press briefing Wednesday to give an update on the situation in the country.

The Western-backed Afghanistan government fell under Taliban control on Sunday, two weeks before American troops are set to complete their withdrawal from the country.

The recent development marked the end of two decades of conflict that began after a US-led coalition drove the Taliban from power in 2001 for refusing to hand over al-Qaida leader Osama bin Laden, who is considered the mastermind of the 9/11 attacks against the US.

The country is already suffering from years of conflicts. That, combined with the impact of the COVID-19 pandemic, recurring natural disasters including drought, and deepening poverty have taken a heavy toll on the population.

According to McGroarty, who briefed reporters via video from Kabul, 14 million Afghans are suffering from hunger, more than 2 million children in the country face malnutrition, and numerous others are having trouble seeking shelter and facing various health issues.

"The needs are enormous. To scale back on funding now would only add to the instability and the desperation. You saw the desperation at the airport. … I would urge the international community to rethink if they are considering reducing the funding. Now is the time to act in Afghanistan. Now is the time that the Afghan people need the international community to stand beside them," she added.

Her remarks came after numerous European countries, including Germany and Finland, announced that they have suspended development aid to the country after the Taliban returned to power.

The European Union, which in November had promised to donate 1.2 billion euros to Afghanistan over the next four years in long-term and emergency assistance, also confirmed its decision to halt funding.

The US on Sunday froze Afghan government reserves held in US bank accounts, which would block the Taliban from accessing nearly $9.5 billion in reserve assets, a sum that amounts to about a third of the country's yearly economic output.

Representatives from the UN agencies worry that cutting funds at this time would exacerbate the suffering.

According to the UN, even before the advance of the Taliban in recent weeks, some 18.4 million Afghans already require humanitarian assistance, while 390,000 people have been displaced because of the conflict.

Caroline Van Buren, representative of the UN Refugee Agency (UNHCR) in Afghanistan, who also spoke at the press conference, noted that the tens of thousands of Afghans have fled their homes in recent weeks.

"Currently, the overwhelming majority of displacement is taking place within Afghanistan itself. That's where humanitarian efforts also need to be focused," she said.

More than half a million people have been displaced within the country since the beginning of the year, and 80 percent of those forced to flee in the country are women and children, said Van Buren.

"And their message is clear, they want us to stay and continue our work in Afghanistan. We have been engaging constructively with the new leadership to preserve our operational presence across the country, and we are hopeful that we will scale up our work for women and children in the coming days," he said.

The UN agencies vowed to continue to stay in Afghanistan and deliver humanitarian aid for people in need in the country.

"This is really Afghanistan's 'hour of greatest need', and we urge the international community to stand by the Afghan people at this time," McGroarty said.