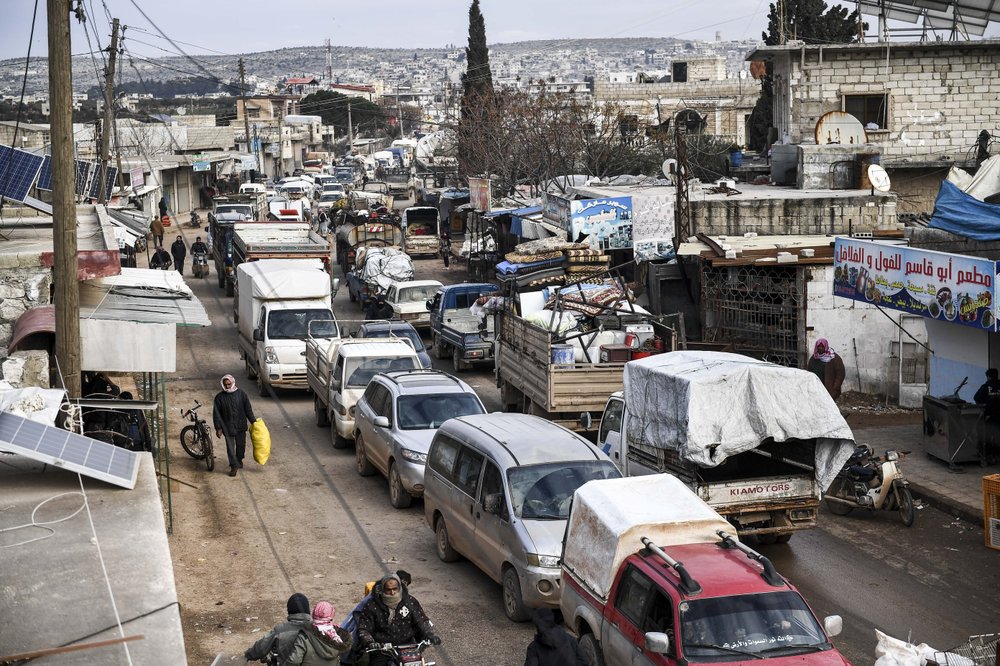 Civilians flee from Idlib toward the north to find safety inside Syria near the border with Turkey, Saturday, Feb. 15, 2020. (Photo: AP)

The United Nations human rights chief urged Syrian government forces and their allies Tuesday to allow safe corridors in conflict areas in northwestern Syria, where a military offensive has unleashed a massive wave of fleeing civilians in one of the worst humanitarian catastrophes in the long civil war.

Michelle Bachelet told reporters in Geneva it was “cruel beyond belief” that civilians live under plastic sheeting in freezing conditions while getting bombed.

Her appeal came after a day after Syrian President Bashar Assad pledged to press ahead with a military campaign in the northwest that has displaced more than 900,000 people from their homes since the start of December, according to UN officials.

Many of the civilians are sleeping in open fields and under trees in freezing temperatures.

“Children and families are caught between the violence, the biting cold, the lack of food and the desperate living conditions. Such abject disregard for the safety and well-being of children and families is beyond the pale and must not go on,” said Henrietta Ford, executive director of the UN’s children agency.

About half the region’s population had already fled other parts of Syria, and displacement refugee camps are full. Aid organizations, including the UN World Food Program, have been forced to stop food distribution temporarily because the fighting has disrupted the movement of trucks bringing supplies to the region.

Backed by Russian air power, Syrian government troops have made swift advances, seizing dozens of towns and villages in Idlib province and nearby rural areas around Aleppo.

In the past week, Assad’s forces have secured a strategic highway known as the M5 and consolidated control over Aleppo province for the first time since 2012, dealing a severe blow to the opposition now fighting to hold its last bastion in Idlib.

The government’s rapid advances have sparked rare clashes between Syria and Turkey, which backs Syria’s rebels and has troops in the region to monitor a 2018 cease-fire deal. Turkey’s president has warned Assad to halt the advance and sent thousands of troops and equipment into the opposition enclave to try to stall the Syrian government offensive.

Already home to more than 3.5 million Syrian refugees, Turkey fears a new influx of people may overwhelm its borders which it has kept sealed in recent years.

On Tuesday, a Turkish delegation ended two days of talks with Russian officials in Moscow with no statements made. At Monday’s session, the Turkish delegation “stressed the need to quickly reduce tensions on the field and to prevent the further deterioration of the humanitarian situation,” the ministry said. It added that the sides also discussed measures to fully implement the cease-fire for Idlib.

The resumption of joint patrols in Hassakeh, in eastern Syria, was a possible sign of easing tensions.

The UN Human Rights Office said it recorded 298 civilian deaths in Idlib and Aleppo, where the government offensive has been concentrated, since Jan. 1. It said 93 percent of those deaths were caused by the Syrian government and its allies. In addition, 10 medical facilities and 19 educational facilities were either directly hit or affected by nearby strikes, the UN office said.

In an interview with The Associated Press in Lahore, Pakistan, Guterres called for an immediate cease-fire, urging Turkey, Russia and Iran to find a political solution.

Bachelet also urged all parties begin an immediate cease-fire and ensure the protection of all civilians. She called on the Syrian government and its allies to allow humanitarian corridors in conflict areas to permit the safe passage of civilians.

“No shelter is now safe,” Bachelet said. “And as the government offensive continues and people are forced into smaller and smaller pockets, I fear even more people will be killed.”

Syrian opposition activists, meanwhile, reported airstrikes on several rebel-held areas Tuesday, including the outskirts of the town of Atareb and Daret Azzeh.