About 32,000 people have fled the Tigray region of Ethiopia into neighboring Sudan, and the United Nations refugee agency said it is preparing for up to 200,000 more to arrive in the next six months if necessary. 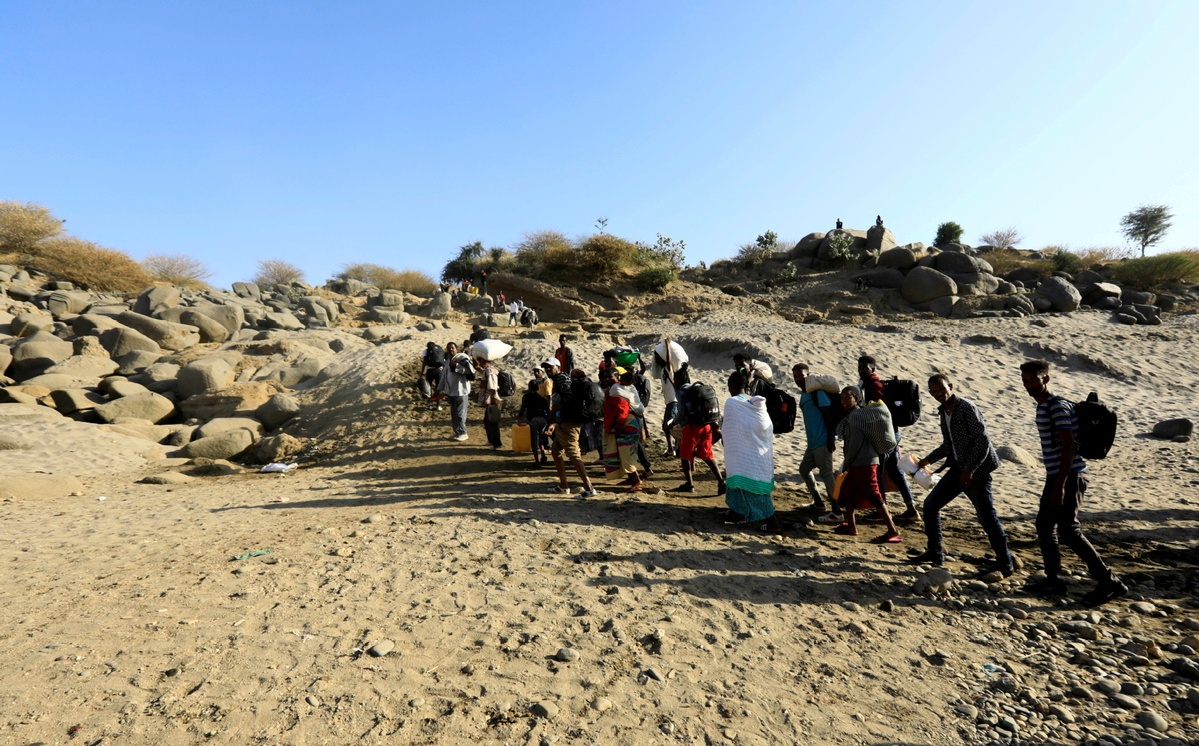 Ethiopians who fled the ongoing fighting in Tigray region, carry their belongings from a boat after crossing the Setit river on the Sudan-Ethiopia border in Hamdayet village in eastern Kassala state, Sudan, Nov 22, 2020. (Photo: Agencies)

Axel Bisschop, the agency's representative in Sudan, told reporters on Friday that "nobody at this stage can say exactly how many will come", as deadly fighting continues between Ethiopian troops and Tigray regional government forces.

Another crisis is growing inside the sealed-off Tigray region as food and other supplies run desperately low. UN Secretary-General Antonio Guterres called for the opening of humanitarian corridors "and the truces that might be necessary for humanitarian aid to be delivered".

"This is a matter of enormous concern to us," he said.

Ethiopian refugees are arriving in a very remote area of Sudan, and humanitarians must create a crisis response virtually from zero even as up to 5,000 refugees continue to arrive daily.

"What definitely is clear is that fighting is ongoing, and it is sporadic," said Hameed Nuru, the Sudan country representative for the World Food Program. "You never know where it's going to happen. So it is this anticipation and not knowing which is causing a lot more fear and causing people now to cross."

There had been reports that some fighters may have put down their arms and joined the flow of people crossing, which could add to tensions, he said.

The UNICEF country representative in Sudan, Abdullah Fadil, said of the crisis: "This could unravel Ethiopia and also Sudan. Soon we will be overwhelmed … if this rate continues."

Children under 18 make up about 45 percent of the refugees, he said.

In the swelling Um Rakouba refugee camp, Taharsta Mahya and her family found shelter with a local family.

"People were hit by the bombs and we were covered in dust. We made it out, we had no food, and we were hungry. People welcomed us here. We had no clothes, and people who saw us threw clothes at us."

Their host, Um Al-Hassan Khamis, confirmed the account. "Every day I go to the camp and follow up to see if there is someone who needs items and try to provide them."

People fled Ethiopia in a great hurry, UN officials said, and most arrived in Sudan with nothing. "It's a mix of medical doctors, professionals, bankers, farmers," Fadil said. "You could tell some people were actually well-off."

Ethiopia's government has been fighting Tigray regional forces since an attack on a military base there on Nov 4. Each side regards the other as illegal, the result of a falling-out between Nobel Peace Prize-winning Prime Minister Abiy Ahmed and the local authorities.