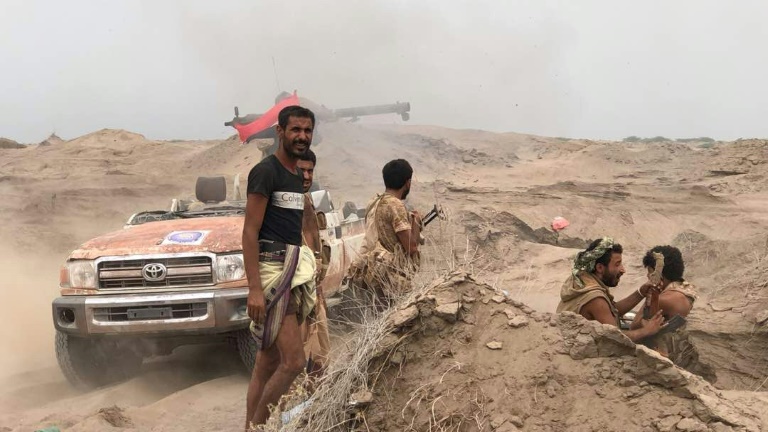 UN ceasefire efforts in Yemen appeared to have fizzled on Monday, raising fears for civilians as Saudi-backed pro-government forces press an offensive to retake the key rebel-held port city of Hodeida.

After two days of talks in the capital Sanaa, UN envoy Martin Griffiths was due to brief the Security Council later Monday on his efforts to end the crisis over Hodeida, a key entry point for desperately-needed aid in a country on the brink of famine.

But the Iran-backed Huthi rebels said the talks had failed, and the head of their unofficial government rejected a ceasefire under current conditions after meeting Griffiths on Sunday.

Abdulaziz Saleh bin Habtoor accused Saudi-led forces of "escalating their attacks on the western coast when they felt there were serious moves towards a solution".

The Saudi and Emirati-backed assault has seen thousands of families displaced as loyalist forces battle towards the Red Sea port city.

The Huthis, Zaidi Shiite tribes linked to Iran, seized control of the area along with the capital Sanaa and much of northern Yemen in 2014, sparking an intervention by a Saudi-led alliance the following year.

The war for control of the Arab world's poorest country has since killed at least 10,000 people and triggered what the UN says is the world's largest single humanitarian crisis.

Some 22 million people need aid, while 8.4 million are on the brink of starvation.

More than 70 percent of Yemen's imports flow through Hodeida.

'Not at our expense'

The Saudi alliance imposed a near-total blockade on Hodeida port earlier this year, alleging it served as a major conduit for illicit arms deliveries to the Huthi rebels by Riyadh's regional arch-rival Iran.

Multiple rounds of UN-brokered talks have failed to reach a deal between the internationally-recognised government and the Huthis.

The Huthis' bin Habtoor was defiant on Sunday after meeting the UN envoy.

The capture of Hodeida would be the Saudi-led coalition's biggest victory of the war so far.

Loyalist forces in recent days closed in on areas south and west of the port, advancing on a disused rebel-held airport just south of the docks, according to sources in the Yemeni army.

The UN has warned the Hodeida offensive could spark a fresh humanitarian crisis in a country already ravaged by war.

The Security Council on Thursday demanded that Hodeida port be kept open to vital food shipments, but stopped short of backing a Swedish call for a pause in the offensive to allow for talks on a rebel withdrawal.

Rights groups, including the International Committee of the Red Cross and Norwegian Refugee Council, have said they were forced to suspend their work near Hodeida last week.

Civilians deaths have not yet been confirmed in Hodeida. The conflict has killed at least 139 fighters, mostly rebels, according to medical and military sources.