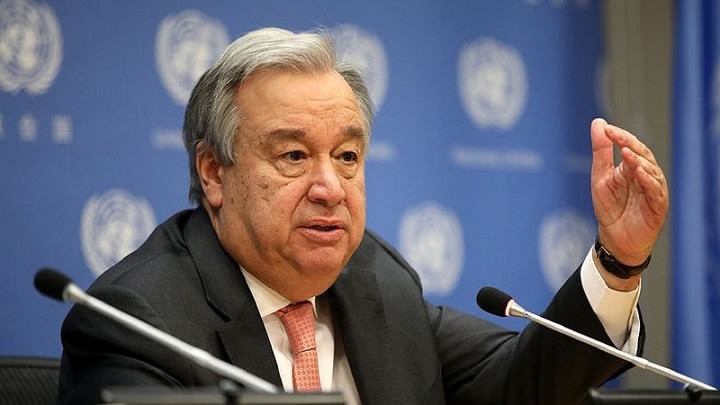 The disregard for children's rights amid war and upheaval "is shocking and heartbreaking," the UN chief told the high-level open debate on children and armed conflicts at the Security Council, held virtually.

Guterres urged warring parties to prioritize the prevention of violations against boys and girls, and called on countries to support their protection at all times.

"There is no place for children in conflict, and we must not allow conflict to trample on the rights of children," he said.

The secretary-general presented his latest report on children and armed conflict, which was published last week.

It revealed that last year, grave violations were committed against some 19,300 youngsters affected by fighting in countries such as Afghanistan, Syria and the Democratic Republic of the Congo.

Recruitment and use in hostilities remained the top violations, followed by killing and maiming, and denial of humanitarian access.

"Moreover, new and deeply concerning trends emerged: an exponential increase in the number of children abducted, and in sexual violence against boys and girls," Guterres said.

"We are also seeing schools and hospitals, constantly attacked, looted, destroyed or used for military purposes, with girls' educational and health facilities targeted disproportionately," he said.

The Security Council on Monday held its annual open debate on children and armed conflict via videoconference. Estonian President Kersti Kaljulaid chaired the meeting. The Council was also briefed by Henrietta Fore, the Executive Director of UN Children's Fund, and Forest Whitaker, Advocate for Children Affected by War with the Office of the Special Representative of the Secretary-General for Children and Armed Conflict.