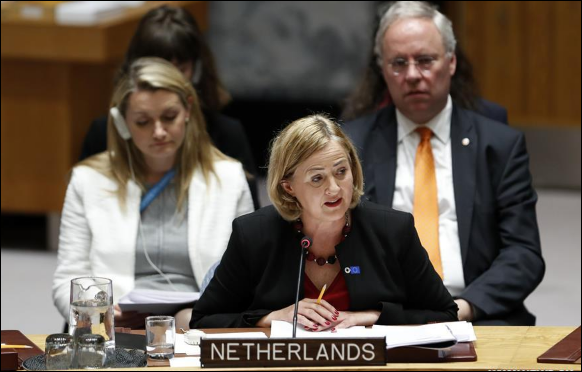 Dutch Vice Foreign Minister Yoka Brandt(front) addresses a Security Council meeting at the UN headquarters in New York, Oct. 25, 2018. UN Secretary-General Antonio Guterres on Thursday asked the international community to match words with action over the empowerment of women for the sake of peace and security. (Photo: Xinhua)

UN Secretary-General Antonio Guterres on Thursday asked the international community to match words with action over the empowerment of women for the sake of peace and security.

There is a significant gap between what we say and what we do over the issue, Guterres told a high-level Security Council debate on women, peace and security.

"Every year, we make laudable commitments -- but they are not backed with the requisite financial and political support. We repeat statistics about the sustainability of inclusive peace processes -- but that is not how we mediate most conflicts," he said.

"We extol the positive influence of women peacebuilders -- but provide little space for their participation. We rely heavily on women's organizations -- but do not fund them adequately. We recognize the importance of gender analysis -- but cut the budgets for such expertise."

He promised a series of measure to address the gap in the coming year, including having more women peacebuilders, promoting women's role in mediation and more funding on gender equality in the peace and security pillar.

Gender parity has the greatest potential impact on effectiveness and credibility in UN field operations. But this is where the numbers are lowest, and the rate of change is slowest, said Guterres.

Women now comprise 41 percent of heads and deputy heads of UN peace operations -- more than ever before. But the number of women in peace operations overall has stagnated, he said. "Without decisive action, they will go backward as some missions are downsized."

He said he has formed a working group to put emergency measures in place to address this.

It is also crippling to the United Nations' credibility and protection capacity that women represent only 4 percent of military peacekeepers and 10 percent of police, he said.

Women's meaningful participation in mediation is directly linked to more sustainable peace. But many processes lack inclusiveness, he said.

The participation of women in formal peace processes remains extremely limited. Between 1990 and 2017, women constituted just 2 percent of mediators, 8 percent of negotiators and 5 percent of witnesses and signatories in all major peace processes, he said.

"I welcome the growing sense of urgency from member states, civil society and others to ensure that we are designing more effective peace processes with much stronger participation of women."

Guterres said he has created a high-level task force to review UN funding on gender equality, including in the peace and security pillar. "I will hold UN entities accountable to their commitments to track spending on women, peace and security, with a target of reaching or exceeding 15 percent by 2020."

A gendered approach to peace and security means supporting peacebuilding at the local level, even during conflict, said Guterres. "As peace processes falter at the national and international level, we must consistently support the local women's groups that negotiate humanitarian access and support community resilience; learn from them; and build peace from the ground up."

He said that from now on he will include gender analysis in his reports to the Security Council whenever it is relevant.

He also reiterated his commitment to ending all forms of sexual exploitation and abuse within the UN system.

"As we look forward, I urge you to invest in gender equality and women's empowerment not only as ends in themselves, but as critical means of achieving our overarching aim of preventing and ending conflict and building peace and prosperity in the world for all," he told the debate, which attracted representatives from about 80 member states as well as activists.

Despite progress in some areas, women's empowerment has a long way to go, said Guterres.

Conflict continues to have a devastating effect on women and girls. The United Nations documented more than 800 cases of conflict-related sexual violence in 2017, a 56 percent increase since 2016, he said.

Women human rights defenders, political leaders, journalists and activists, who play an important role in addressing the root causes of conflict, are targeted at alarming rates, he added.

Women's marginalization, lack of access to health and education services, and economic disempowerment continue to be both a cause and an effect of conflict. And funding for programs to promote gender equality and the empowerment of women in countries affected by conflict is just 5 percent of total bilateral aid to such countries, said Guterres.