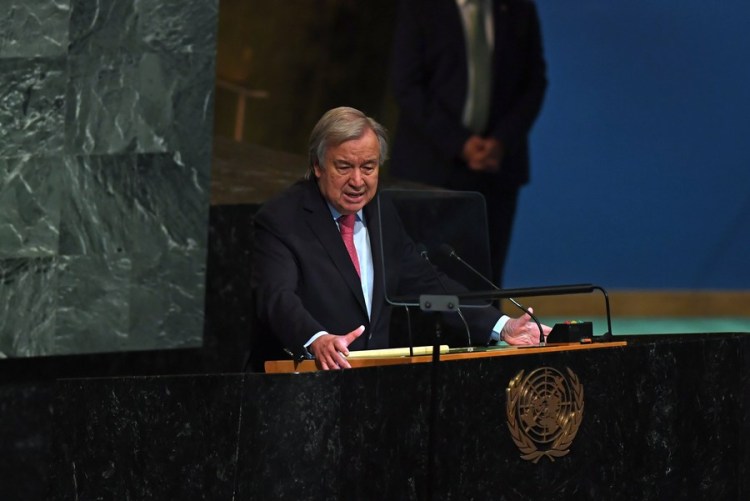 UN Secretary-General Antonio Guterres speaks at the opening of the General Debate of the 77th session of the UN General Assembly at the UN headquarters in New York, Sept. 20, 2022. (Photo: Xinhua)

"Our top priority continues to be getting vaccines into arms. This must include addressing the shadow pandemic of vaccine hesitancy, and countering misinformation with life-saving facts," he told a high-level event on ending the pandemic.

Second, the testing gap. Testing rates are plummeting everywhere, exposing the world to potential variants and undermining the rollout of new treatments. Giving these new medicines a chance means dramatically expanding testing and treatment coverage, especially for low- and middle-income countries, he said.

Third, the preparedness gap. Now is the time to strengthen defense against future threats by investing in early-warning systems, local manufacturing and diagnostic capabilities, and a well-paid, well-supplied health workforce. The world must never be caught so unprepared again, he said.

"Making progress toward closing these gaps is what today is all about. It's time to build political momentum to finish the job on COVID-19. Let's get it done. Let's end this pandemic -- once and for all," said Guterres.

The world is challenged on all fronts. Most of those challenges, particularly rising poverty and inequalities, have been aggravated by the pandemic that continues to upend lives, livelihoods and economies, he said.

This is the third UN General Assembly taking place under the shadow of COVID-19, he noted.

While no country was spared, low- and even middle-income countries continue to suffer the worst impacts, he said.

At the same time, the world can draw strength from some inspiring progress. On average, countries have vaccinated 75 percent of their healthcare workers and other populations. New oral antiviral drugs are coming on board. Combined with testing, these offer a clear path to preventing deaths among the most vulnerable. And countries are increasingly integrating COVID-19 measures into routine health services and programs, he said.

"The lessons from these successes are clear. The virus is treatable. We can save lives. And we can bring the virus under control -- even among high-risk populations. If we could combine these tools with greater ambition among world leaders, we could end the pandemic this year," said Guterres.

The high-level event was convened by the secretary-general on the sidelines of the general debate of the UN General Assembly, and was co-organized with the World Health Organization and the UN Children's Fund.